The Korean branch of Robert Walters, a recruitment consultancy specializing in the placement of bilingual professionals, recently presented its annual salary survey report, displaying general hiring and salary trends as well as the business outlook for this year.

“But when it comes to senior-level bilingual professionals, the recruiting competition escalated even further, which then led to a salary increase for the corresponding group.”

In a struggling economy, multinational companies sought to differentiate themselves from their competitors and to transition to a more Westernized business environment, he explained.

“The overall headcount did not increase much, but employers chose to maximize their personnel efficiency by hiring those able to perform strategic duties as well,” Modrich said.

This preference for multifunctional capacity was the most prevalent in accounting and financial services.

“This also means that the demand for generalist marketing decreased during the period,” the manager added.

The banking industry was among the most passive in the market, with companies hiring predominantly on replacement basis only, the report said.

“Very few significant changes are anticipated this year as the banking business is likely to remain highly challenging,” the official said.

Things are not expected to be very different this year in the general commerce market, including consumer and retail.

“The sales and marketing job levels will remain moderate this year, particularly in the cosmetics and personal care businesses,” Modrich said.

“The few who do make it into the industry will mostly be specialists in specific areas, such as digital and online marketing, public relations and channel development.”

With large Korean companies adopting new technologies such as virtualization, networking, storage and big data management, the supply of specialists became crucial in order to implement and drive business growth, the report said.

“Recruiting firms experienced soaring competition for these IT-related professionals, especially those who have experience in the corresponding industry,” the official said.

Salespeople for traditional hardware and general software, on the other hand, found it more difficult to secure their jobs and salary level, he added.

According to the survey conducted on multinational firms, the average annual salary among director-level officials, excluding benefits and bonuses, contrasted according to their jobs and roles. 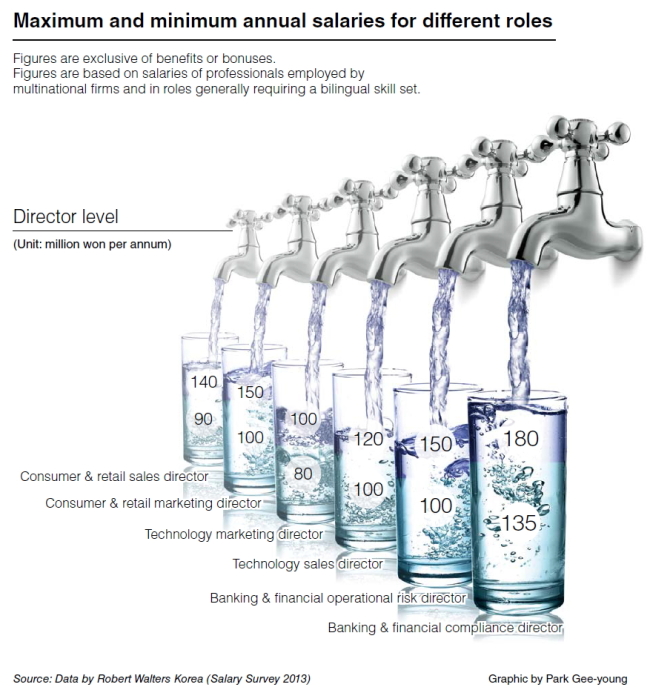 The average wage for director-level officials dealing with consumer and retail sales ranges between 90 million won ($83,000) and 140 million won, according to the report. But banking and financial compliance directors receive between 135 million won to 180 million won on the average.

Despite the stagnancy and polarization in the current recruitment market, some positive factors are expected to boost Korea’s overall industry, the official also said.

“Korea’s ratification of the free trade pacts with the United States and the European Union offered a motive to multinationals to enter the country or to expand their existing market,” Modrich said.

This led to a limited but steady flow of new market entrants last year and this growth is expected to continue this year, he explained.

“As our report is focused on the salaries of professionals employed by multinational firms and in roles requiring a fluently bilingual skill set, it may not reflect the nation’s overall recruitment trend,” Modrich said.

“It nevertheless indicates a big picture of the future recruitment market, which will display a higher need for language skills and professional knowledge.”