According to data compiled by Statistics Korea and obtained by the education ministry, South Korean parents spent 19 trillion won ($17.47 billion) last year on private education for their children, down 5.4 percent from a year earlier. 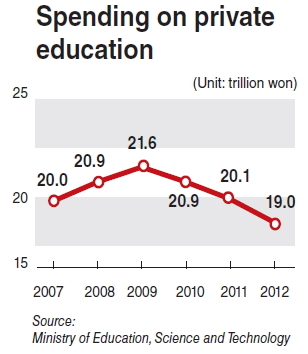 Private education spending was at its highest in 2009 at 21 trillion won and has since been decreasing, according to the data. The agency started to compile related data in 2007.

The fall is attributed to the increase of parents placing their elementary school children in government-run after-school programs, which provide additional classes and extracurricular activates, the ministry said.

“Nearly 60 percent of students are participating in the after-school programs. It has risen steadily since we introduced the program in 2006. Compared to 2008, it is up over 10 percentage points,” said an education ministry official.

The ministry said the decrease is also caused by fewer students applying to special-purpose schools like foreign language high schools following the government’s revision of the entrance exam system. Some 387,000 won per month was spent to prepare for those schools, down by 48,000 won in 2009.

English and math were the major subjects parents spent the bulk of their money on, averaging a monthly cost of 80,000 won and 75,000 won, respectively, last year.