Royalty payments near $8b 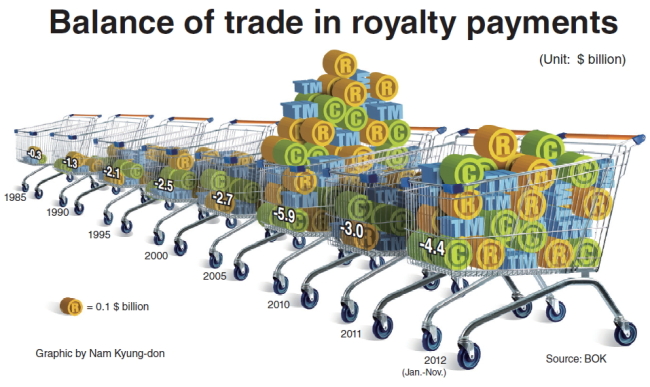 Korea spent about $7.7 billion on royalty payments, including the usage of intellectual property rights, to foreign firms for the first 11 months of 2012, data from the Bank of Korea and Idea Bridge Asset Management showed Wednesday.

The payments posted a 5.5 percent growth from the previous year, according to the central bank. But royalties paid to local information technology firms remained at $3.24 billion during that period, bringing the overall balance to a deficit of $4.45 billion, according to data.

Citing the growing burden on royalty expenses, BOK economists said that Korean tech firms ― which engaged in a series of legal litigations regarding intellectual property rights ― and other business entities need to make stronger effort to create their original technologies.

Samsung Electronics, LG Electronics and SK Hynix are some of the big-name information technology firms that underwent large-scale lawsuits with global non-practicing entities, or “patent trolls,” which are patent owners that feed solely on royalties without actually using the patented technology for production.