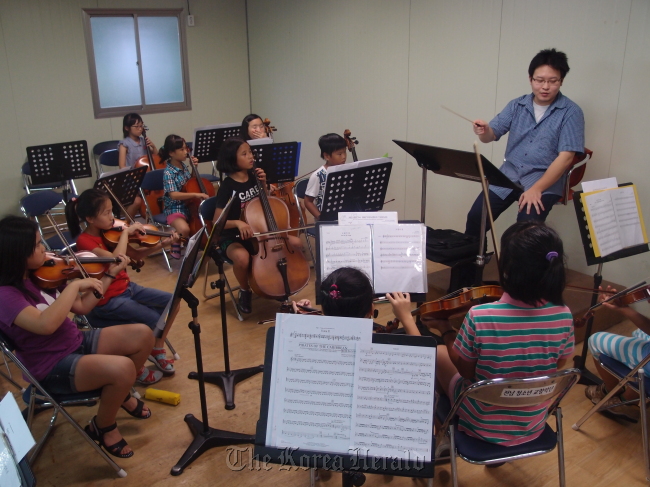 Born to a impoverished family, Hong Ui-hyun gave up on studies after graduating from middle school. He happened to work at a musical instrument factory and soon fell in love with the elegant lines and beautiful sounds of violin, which helped the desperate boy to tide over many harsh years.

Two decades later, Hong is now the owner of one of Korea’s leading string instrument makers and a devoted practitioner of the power of music for children who are poor, abandoned or suffering mental disorders.

“It makes me happy to be able to give hope to the kids and see them change,” the 40-year-old master craftsman said in an interview with The Korea Herald.

He has donated around 100 violins, violas and cellos a year to child welfare facilities and schools for the past 13 years.

“I can’t figure out how many I donated and how much I could have made if I had sold them,” he said.

Not only providing instruments, he also donates money to teach music to hundreds of children and helped found a children’s orchestra in 2010. The 180-member Dream Orchestra, a Korean version of “El Sistema,” had their first performance last year.

“After the first concert, the children and I felt like we could do anything,” Hong said.

At age 15, he started working at the instrument workshop in Seoul.

“I worked on an assembly line without knowing what I was making. I later realized that the wooden necks and curved bodies rolling out of the line were for violins and cellos,” he said.

He started up his own shop in Mokpo, South Jeolla Province, in 1997 which grew quickly thanks to his hard work and skills.

His charity activity began 2000 when he met an orphanage operator in nearby Yeongam.

The director of Young-ea Won came to his shop to buy stringed instruments. He learned that the facility could only afford to buy instruments for half of its 25 children. Hong provided the rest for free.

“Musical instruments need good care and maintenance to produce a soft and pleasant sound, so I kept telling the kids to have close relationships with the instruments,” he said.

“The children were very shy when we first met, but it wasn’t long before we grew close as I frequently stopped by to fix their instruments and change parts.”

As the kids grow, he also gives them new instruments.

He has financially supported three or four kids a year for private tutoring and music books since 2010.

“I cannot forget the faces of the kids who were waiting for private music lessons outside their school on a freezing cold winter,” Hong said.

Even though he could provide instruments, his resources for good tutors and practice space were limited.

In 2010 he began to work together with the Green Umbrella ChildFund Korea when it launched the Dream Orchestra. The project allowed children to receive lessons from professional musicians.

The initially 30-member orchestra has grown to a 180-strong ensemble in less than two years.

Teachers and social workers taking care of the kids say the children have changed after learning to play music. Some suffering from attention deficit hyperactivity disorder showed much improvement and some extremely introverted kids have become outgoing, and even chatterboxes.

“Most of the kids who have learned music are doing well socially,” Hong said.

He said his business is not that profitable but he would continue to help kids for as long as he can.

“It has nothing to do with money. It will be good enough for me if I can help just one kid realize his or her dream,” Hong said.