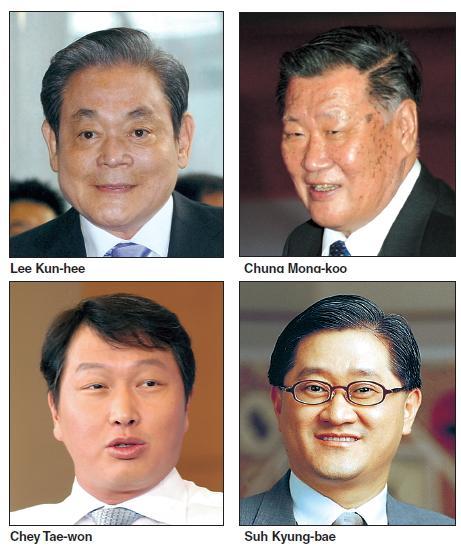 Samsung owner Lee Kun-hee and his wife Hong Ra-hee topped the lists of Korea’s wealthiest in terms of stock holdings.

Lee ranked the richest on the list for men, while Hong was at the top for women. This was the first time the couple nabbed the No. 1 slot for both lists, according to Chaebul.com, a local website providing exclusive business information on conglomerates.

As of last Friday, Lee’s stock portfolio was worth a combined 11.14 trillion won ($10.27 billion). The net value of his stocks had previously tumbled to the 10 trillion won range in the aftermath of the eurozone financial crisis, but the shares rebounded as Samsung Electronics stock soared on robust growth in the smart device industry.

On the day, shares of Samsung Electronics peaked at a record high of 1.43 million won. The value fell 2.3 percent to 14.04 million won on Monday on profit-taking.

Lee holds 4.98 million Samsung Electronics shares, along with 12,398 shares of the company’s preferred stocks. He also has stakes in other Samsung affiliates including Samsung Life Insurance and Samsung C&T Corp.

Hong was closely followed by Shinsegae Group chairwoman Lee Myung-hee, who was worth 1.42 trillion won in stocks. Until now, Lee had been the richest woman on the list.

Back among the males, Chung Mong-koo, chairman of Hyundai Motor Group, was behind the Samsung Electronics chairman by recording a stock wealth of 6.37 trillion won, showing a wide gap of almost 5 trillion won between the two top wealthiest on the list.

Some entertainer-turned-tycoons landed on the list as well, including YG Entertainment head Yang Hyun-suk and Lee Soo-man, founder of S.M. Entertainment. They recorded shares worth 208.5 billion won and 203.8 billion won, respectively. Yang ranked 76th on the list, while Lee was at 79th place.