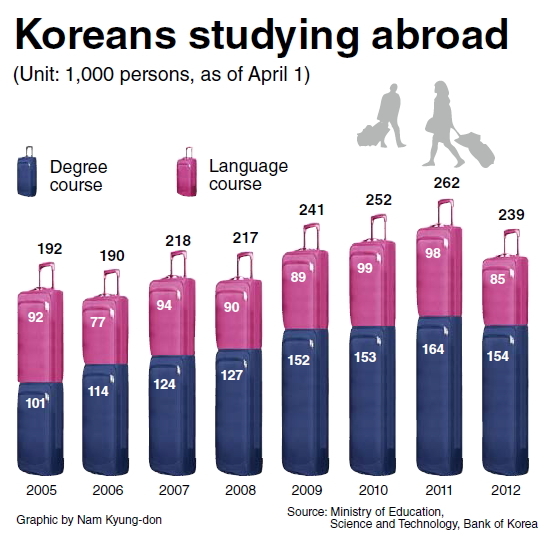 The number of Koreans studying overseas fell this year for the first time in four years amid a prolonged economic slowdown, a report said Monday.

As of April, students at foreign universities or short-term language courses dropped by nearly 9 percent from a year earlier to 239,213, according to the Ministry of Education, Science and Technology.

The report released by the Bank of Korea showed that some 154,000 students are pursuing degrees at overseas universities, a 6 percent drop from the previous year.

There was a minor drop in 2008 during the global economic crisis, but students studying overseas continued to grow over the past years, with a peak of 262,465 students in 2011.

Observers said that a surplus of foreign school graduates in Korea has made them less attractive to employers, resulting in a drop of students going overseas to study.

Meanwhile, the report also showed that foreign students pursuing a degree in Korea dropped by 4.8 percent to 69,589 from a year earlier.