The figure compares to none for Hyundai Motor and one for its affiliate Kia Motors ― the two companies that claim almost 80 percent of the nation’s car market.

“Investing in women is the right thing to do,” said GM Korea CEO Sergio Rocha. “We promote them not because they wear skirts, but because of their skills and capabilities.”

Over the past 10 years in Korea, GM has seen its number of female workers triple from 300 to 900. Their portion also doubled from 7 percent to 14 percent of their total workforce.

Even though the gender ratio still lags behind those in the United States, Europe and Latin America, Korea shows a clear sign of progress, said the CEO.

“It’s not a favor, but the company’s obligation,” he said. 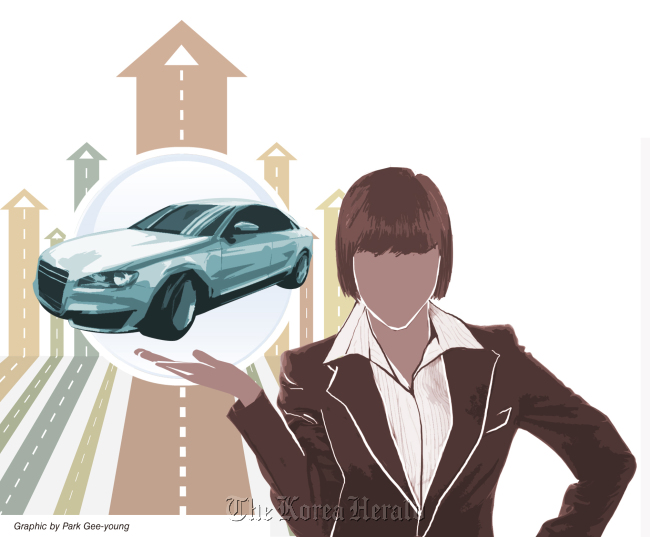 With their growing presence in the market, more Korean women are joining the still male-dominant auto industry. And a growing number of them are climbing to leadership positions, especially in import car brands.

Foreign carmakers have been expanding their presence aggressively in recent years. Their combined market share reached 10 percent for the first time this year.

One common factor among them is that their PR or marketing teams are led by female executives who have a global mindset based on their overseas work experience.

BMW Korea’s communications officer Joo Yang-ye has driven the company to become the best-selling import car brand for the past three consecutive years.

The Korean unit of Mercedes-Benz has Park Joo-hye and Ye Sung-hee who have roles in product and corporate communications, respectively.

Lee Yeon-kyong of Audi Korea, who became the youngest executive officer at age 33 in 2008, has helped Audi’s successful settlement as a premium brand in Korea.

“Import car brands may be one of the first sectors that recognized the beauty of female leadership,” said Yoon Dae-sung, executive managing director of the Korea Automobile Imports and Distributors Association. “Their sensitive marketing approaches are essential to appeal to luxury customers.”

“Head offices also welcome the growing trend in Korea. Compared to Korean men who are sensitive to hierarchy, women seem more flexible and feel free to communicate,“ he said.

She is thought to have earned recognition from the France-based Renault Group when she offered consultations for the struggling Korean unit’s recent voluntary retirement program.

“Most female executives work for marketing or PR teams for now. Considering their proven roles, companies need to have them at more diverse positions such as engineering and development,” said Yoon of the KAIDA.