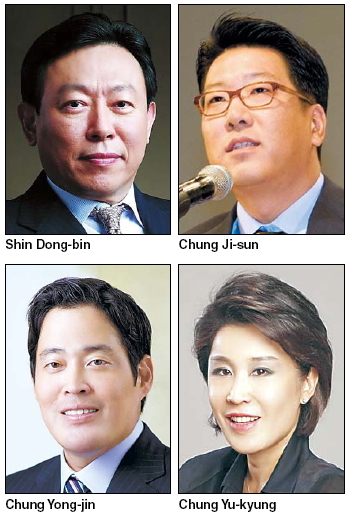 Four chiefs of major retail giants were ordered to attend a parliamentary hearing Tuesday. But none of them showed up, citing overseas business trips.

Shinsegae Group vice chairman Chung Yong-jin also was said to have left for Hong Kong ahead of the planned hearing to sign a memorandum of understanding and his younger sister and Shinsegae Co. vice president Chung Yu-kyung was on a business trip to the U.K.

The four were summoned to answer questions on allegedly unfair business practices with smaller contractors and their business expansions, which are criticized for their impact on small independent retailers.

It has long been common in Korea for top entrepreneurs not to appear at a parliamentary hearing for hastily made reasons such as overseas business trips and health problems, as they are likely to face humiliating accusations by legislators.

This tradition seems to have passed on from one generation of executives to the next.

As they had already refused twice to attend the National Assembly’s audit session of the Fair Trade Commission last month, lawmakers decided to take an unprecedentedly strong measure against major conglomerates, filing a complaint with the prosecution.

“We need to correct their arrogant attitude by enhancing related laws,” said one lawmaker. Another said: “We should not end up filing a complaint. We should have them at a hearing again.”

The parliamentary committee also plans to reschedule another hearing for the four until all of them are available.