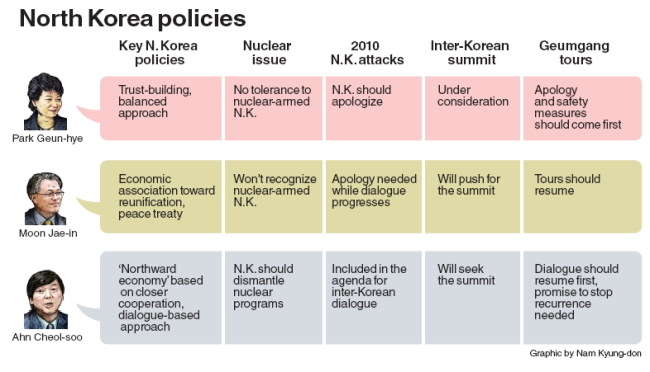 All three major presidential candidates are promising to seek dialogue and build trust with North Korea, but they differ over priorities and conditions.

The three pledge more policy flexibility based on the shared understanding that President Lee Myung-bak’s strict, reciprocal policy has borne little fruit and there needs to be a turnaround in the soured inter-Korean ties.

But experts warned against populism, noting that the next president could have difficulty in policy coordination with his or her U.S. counterpart. In a tight race ahead of the November election, Barack Obama and his Republican rival Mitt Romney alike are expected to maintain a tough stance on Pyongyang.

The ruling Saenuri Party’s Rep. Park Geun-hye has moved toward the center of the political spectrum. Stressing a “balanced policy approach,” Park said that she would pursue more talks under her “Korean Peninsular trust-building process.”

Rep. Moon Jae-in of the main opposition Democratic United Party said that he would adopt an engagement policy to entrench peace on the peninsula and beyond, through inter-Korean economic association and reconciliation toward ultimate reunification.

Seen as being somewhere between Park and Moon in terms of the ideological orientation, independent Ahn Cheol-soo pledged to seek deepened economic cooperation through his dialogue-based approach.

Analysts expressed concern that their apparent policy convergence could be because they struggle to win over undecided voters and appeal to the public disgruntled over inter-Korean ties frayed during Lee’s presidency.

“President Lee Myung-bak’s color in his North Korea policy has been clear-cut: strict reciprocity and a demand for sincere measures for the 2010 fatal incidents. All candidates want a policy that is different from Lee’s, and thus policy differentiation among the trio is quite difficult,” said Lee Cho-won, a politics professor at Chung-Ang University.

“They appear to seek populist ideas, even though North Korea policy is something that could determine the fate of our nation.”

All three are still in the process of fleshing out their election pledges, but experts say that their visions lack details.

“Their pledges seem only superficial and I highly doubt whether what they pledge would be in fact practicable in the face of the reality,” said Yoo Ho-yeol, an expert at Korea University.

“In a tight race, they appear to show to the voters what appears to be ‘good.’ Positively speaking, they are cautious, but negatively put, they lack the courage to put forward a more straightforward, differentiated policy for fear of a possible backlash from voters.”

The public appears to want a change in the country’s North Korea policy as there has been no progress in tension reduction.

President Lee has taken a reciprocal policy linking economic aid to the cash-strapped North to denuclearization based on his belief that his liberal predecessors’ unconditional aid was diverted only to strengthen its military.

Growing animosity led to a set of fatal incidents. The North shot dead a South Korean tourist who strayed into an off-limits area in 2008. It also carried out two high-profile attacks in 2010 that killed 48 South Korean soldiers and two civilians.

Though a suspension of inter-Korean talks and exchanges and an increase in military tension have followed Lee’s policy, it has received mixed evaluations. Conservatives hail Lee’s principled, consistent approach while liberals blame his inflexibility for deepened bilateral animosity.

The Saenuri’s standard-bearer Park seeks a delicate policy balance, arguing that the current administration has put too much stress on reciprocity.

Above all, what she stresses most is the restoration of trust between the two neighbors, which can begin with both making good on past bilateral agreements including the July 4 inter-Korean statement adopted in 1972 on peace and national unity.
“We basically have to keep these inter-Korean agreements forged by past governments. Isn’t it nonsensical when you say you would make new promises and keep them, when you can’t keep the old ones?” Park said during her recent visit to the Demilitarized Zone.

In her contribution to the U.S. bimonthly journal Foreign Affairs last year, Park introduced what she terms a policy of “trustpolitik.”

“Trustpolitk does not mean unconditional or one-sided trust without verification. Nor does it mean forgetting North Korea’s numerous transgressions or rewarding the country with new initiatives,” she said in the contribution.

Park said that Pyongyang should keep its agreements with Seoul and the international community to build a minimum level of trust, and that there should be clear consequences for breaching peace. She added that trustpolitik should be applied consistently free from political influence.

Regarding an inter-Korean summit, Park said she would “consider” it. She had talks with then North Korean leader Kim Jong-il as a special envoy to Pyongyang in 2002.

On the issue of suspended tours to Mount Geumgang, Park priorities securing Pyongyang’s apology and measures to prevent the recurrence of the 2008 shooting incident in which a South Korean tourist was shot dead while straying into an off-limits zone. The other candidates are more flexible on this issue, putting more stress on dialogue.

Considering that Park stressed reciprocal ties with the North in the past, her move toward engagement was quite a change. But some doubted her sincerity as her campaign has recently made the dispute over the Northern Limit Line, a de facto maritime border, its key campaign issue.

“I doubt her sincerity in her rhetoric of the peninsular trust-building process. The NLL is one of the most sensitive bilateral issues and Roh Moo-hyun and Kim Jong-il agreed to make the area surrounding it a peace zone,” said Hong Hyun-ik, a senior fellow at the think tank Sejong Institute.

“Taking issue with the past inter-Korean deal won’t work to improve bilateral trust at all. Rhetoric should be backed by action.”

Having a more ambitious vision for inter-Korean economic cooperation, the former chief of staff to the late Roh has highlighted that economy, peninsular peace and security are all interconnected.

“Overcoming the tragedy of Korea’s modern history, it is now the time for Korea to deliver a message of peace and hope to the neighboring countries.”

To deepen economic cooperation, Moon pledges to revitalize the operation of a joint industrial complex in Gaeseong, North Korea, and resume the stalled tours to Mount Geumgang. He also hopes to reduce military tension near the sea border by setting a joint fishing area and establishing a western peace and cooperation zone as agreed in the 2007 inter-Korean summit.

Establishing a comprehensive cooperation pact with the North will also be pushed for to set the legal ground to insulate the bilateral economic cooperation from political influence, his campaign has stressed.

Moon also plans to make efforts to turn the armistice agreement into a peace treaty while concurrently trying to help promote dialogue and better relations between Washington and Pyongyang and between Tokyo and Pyongyang.

Should he be elected as president, Moon would seek to hold summit talks with leaders of the U.S. and China, key regional stakeholders, to discuss his vision for peninsular peace, which will be confirmed through an inter-Korean summit, his campaign explained.

Experts argue that his ambitious plans could face political difficulty given that the Saenuri Party now has more legislative influence. The ruling party has 149 seats in the 300-member National Assembly while the DUP has 127.

To spur inter-Korean economic cooperation, independent candidate Ahn has put forward his “Northward economy” strategy, stressing that he would seek an integrated economic development linking the relatively underdeveloped border areas, other regions in the South and North Korea.

“The way forward for South Korea, which is isolated like an island, is ‘Northward economy,” Ahn has said in media interviews, underscoring that he would find a new growth engine through improved inter-Korean ties.
Although he has yet to reveal policy details, Ahn says he would seek to upgrade the engagement policy of the past liberal governments and go beyond the Lee administration’s policy.

Above all, he stresses dialogue with Pyongyang to spur any discussion on pending issues including the resumption of the tours to Mount Geumgang and the 2010 deadly attacks.

Like other candidates, he stresses the need for inter-Korean talks, saying that the current government’s policy of “using only sticks” has deepened the bilateral animosity.

“(The current government) has had preconditions for the talks. Thus, the talks have not been held and nothing has been addressed. All discussions over pending issues can proceed only when dialogue resumes,” Ahn said in a recent media interview.

Ahn, however, cautions against “doling out too much to the North in an opaque manner.”

“While exchanges and cooperation had achieved a reduction in tension, it caused conflict among South Koreans amid the controversy over whether Seoul gave too much to the North unconditionally,” Ahn wrote in his autobiography.

Experts expressed concern that without a stable backing from the parliament, he may find it difficult to push for his policy on North Korea, a topic that has long divided political circles across different ideological lines.