[Voice] Does the president have too much power?


Constrained by low approval ratings, political estrangement from his party and a series of corruption scandals involving his family and aides, President Lee Myung-bak is firmly in lame-duck status.

The label has been applied since mid-way into the fourth year of his presidency, mirroring the fate of all of Korea’s democratically elected heads of state in the latter stages of their administrations. Yet, for all the apparent impotency of the president for a sizable portion of his five-year term, the degree of power the office wields remains controversial. It’s unsurprising, then, that checking presidential authority has been a recurring theme of the current presidential campaign.
Prime minister’s role

Both independent candidate Ahn Cheol-soo and Democratic United Party candidate Moon Jae-in have proposed greater sharing of executive power with the prime minister, with the president envisaged focusing to a greater extent on foreign affairs. Ahn’s proposal would also see the president in charge of the country’s “future vision,” carried out through a “Ministry of Future Planning.” Ahn’s camp has likened this potential ministry to the Economic Planning Board that oversaw economic development in the ’60s and ’70s.

The argument for further checks on presidential power is not new, nor exclusively liberal. The majority of the Saenuri Party’s candidates in the presidential primaries earlier this year made their own proposals to alter the function or scope of the office. As it stands, Korea’s political system is an unusual hybrid of the presidential and parliamentary models. As in the U.S., the president is elected by a national constituency, rather than as a member of parliament, such as in the U.K.

Unlike in a standard presidential system, however, which emphasizes a separation of powers, Korea’s president can propose legislation and select his cabinet from sitting members of the National Assembly. This latter power grants the president considerable influence over parliament, according to Yonsei University politics professor Yang Seung-ham.

Yet Korea’s president has typically less room to implement his agenda than the prime ministers of parliamentary systems such as in the U.K., where leaders and their parties typically aren’t challenged at the ballot box for five years at a time. Along with its watered-down separation of powers, Korea’s unusual election cycle, with parliamentary elections every four years and a presidential election every five, often woks to stymie the sitting president’s legislative agenda.

Former liberal president Kim Dae-jung had to contend with a conservative-controlled National Assembly for the entirety of his presidency, while his successor Roh Moo-hyun faced the same hurdle for much of his term. Replacing the president’s single five-year term with a four-year term with the chance of reelection has long been mooted by lawmakers and analysts to improve the governing effectiveness of the executive branch. Roh, ironically beset by lame-duck status himself at the time, made a failed attempt to introduce the U.S. model near the end of his presidency in 2007.

Kyung Hee University politics professor Yun Seong-yi said that holding the presidential and parliamentary elections at the same time would be a welcome reform, though difficult to bring about in foreseeable future.

“Once they are the government party they will not shorten the term of the president. I think it a matter of timing,” said Yun. “Someday we will change the constitution and make the terms of the president and National Assembly the same, at four years.”

Yun also pointed out that much of the president’s power and governing style derive from convention rather than powers formally enshrined in the Constitution, meaning that legal reform could, practically speaking, be of little consequence.

Yun in particular poured skepticism on the idea of presidential candidates Ahn and Moon sharing executive power, arguing that it would be difficult to separate domestic and foreign policy coherently, and unlikely that the Blue House would willingly relinquish influence in national affairs.

“Former president Roh Moo-hyun … tried to make that kind of a dual-policy system and he tried to give more power and autonomy to the prime minister, but it didn’t work,” said Yun.

Weakening the authority of the president also raises the possibility of further legislative gridlock, a regular source of public disillusionment and often a precursor to the periodic violence at the National Assembly.

That deadlock, however, is the necessary price of checks and balances to power, in the view of Cho Sung-dai, the chair of the Center for National Assembly Watch.

“If you have a parliamentary system, then the prime minister and Cabinet are depending on the parliament,” said Cho. “But if you have the separation of powers between the president and congress or National Assembly, due to the dual sovereignty you have deadlock. But there is no institutional solution to resolve this kind of deadlock situation unless you have a sort of unified government and National Assembly.”

South Korea is a nation that is still technically at war. The President must be able to make timely decisions about matters of national security and interests.

Spreading power and authority among different branches would only make things more difficult should the “hot” war with the North ever reignite.

Time has come to get rid of the one-term limit, in favor of a two-term limit (there are now smarter ways to prevent dictatorship). As it is, Korea’s political balance is not right: the president becomes a lame duck as soon as he is elected, the executive power is always undermined by internal rivals preparing for the next elections, the legislative power is an embarrassment (corruption, fist fights), and neither justice nor the media are independent. Which leaves us with two powers that are unhealthily too strong in the country:

― Netizens, who often don’t trust mainstream media, but trust too much the Web, and can easily fall for hoaxes or rumors. But netizens are also the last resort in this dysfunctional system, and toughening Internet laws without acting on the other powers might endanger democracy itself.

What Korea needs urgently is a second term for presidents (to be voted after these elections for the next one, meaning that the next president cannot benefit from it), and total transparency (e.g. full disclosure of all the ties, personal interests...).

It has been spun into a “foreign company doing something bad” type of story, but they must have some legal footing. Even if they don’t, it’s a business decision ― they’ll make enough money from having their doors open when their competitors are closed to pay the fines.

If labor is increased, output is increased accordingly. As an easy example, the more workers at an auto factory that work till late, the more cars are produced. To increase labor, we must increase the economically active population, which means those who can work except students without the intention to find employment immediately, stay-at-home moms and dads, and soldiers.

Greater female participation in the workforce or tackling the aging population can become solutions. In the past, women’s employment was restricted by discrimination. But day-care centers and support for educational expenses lighten the burden for women and make it easier for them to enter the labor market. Here we can find one answer. The government must increase these facilities for women to go to work with peace of mind.

Next, let’s look at aging. Korea is top of the list of fast-aging nations. According to numerous economic research institutes, in 18 years, senior citizens over 65 will jump to 7-18 percent of total population in the Korea. Moreover, the birth rate, meaning the average number of babies born per woman, is 1.22, the lowest in the OECD.

The implications of an aging society are more serious than thought. It is clear that productivity suffers as the population gets older. Also among the facts that we fail to notice, in the future, when these babies grow into adults, there will be weakened demand. This indicates that Korea’s economy will be scaled down.

A recent government report claimed that Korean police were short staffed to deal with crimes committed by foreigners in the country. ― Ed.

There aren’t enough police to handle crimes by anyone, and a lot of crime (prostitution, ahem) goes unpunished anyway. The solution isn’t to put more cops in certain areas, but to put more ― and better trained ― cops everywhere, and have them actually enforce the law. 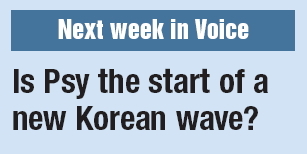