Attention is being paid to whether the nation’s electronic book industry will be able to bask in a boom as Google threw its hat into the local market this week.

Google Korea said on Wednesday that it has created a new “Play Book” category on its mobile app store called Google Play with Korea being the first in the Asian region.

By joining hands with many local and global publishers such as Woongjin, Ridibooks and Munhakdongne Publishing, the Internet giant is offering best sellers, newly-published books and classics to Android smartphone owners. 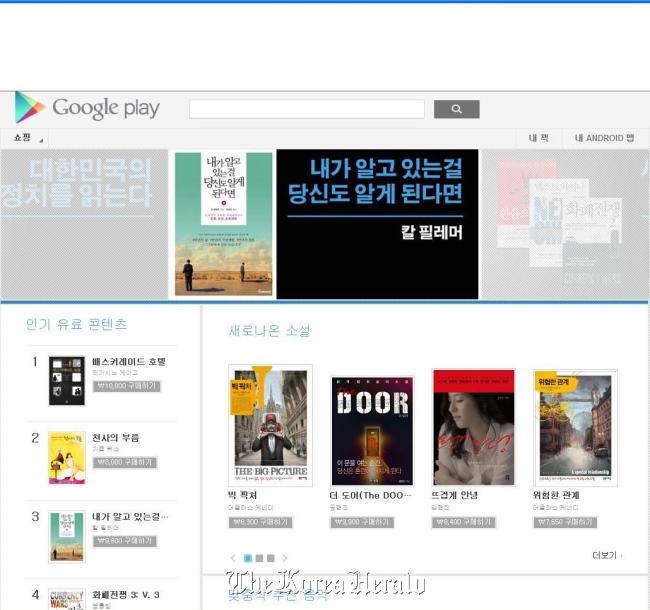 The service will also be available on Apple’s iPhone and iPad soon, according to Google officials.

Google’s e-book service users will also be able to read their books from multiple devices ― from smartphones to personal computers and tablet PCs ― through its cloud computing service that will let readers pick up where they left off.

“We picked Korea since the adoption rate of smart devices, including smartphones, are one of the highest among other nations,” said a Google Korea official.

Google’s move comes at a time when multiple firms are trying to trigger a boom in the country’s e-book industry, which is not happening as fast as they anticipated.

A number of local and global companies, including the world’s largest mobile chipmaker Qualcomm, have targeted Korea and stepped into the market.

As an exemplary case, Qualcomm rolled out an e-book reader called “Story K” based on Mirasol display technology last year. Together with Kyobo, the nation’s largest bookstore, it showcased hundreds of millions of books and sold up to about 40,000 devices.

However, its latest model “Story K HD” was not able to meet expectations, selling about 10,000 units in total.

According to the Korea Electronic Publishing Association, the Korean e-book market was worth up to 289.1 billion won last year. The association stated that the market would double in size to take up more than 20 percent of the local publishing industry in 2013.

In a related effort, Crema Touch, another e-reader, is to be launched on Sept. 10.

Jointly invested by five big name publishers and e-book service firm Korea Epub, 2,000 units of the gadget were sold in the first three days of pre-orders, which began on Aug. 29.

The device, which is equipped with a 6-inch pearl ink display and weighs 215 grams, enables the users to open 7,000 pages at once and could store 3,000 books at the most, its officials said. The outer appearance of the device looks somewhat similar to Amazon’s Kindle and it is priced at 129,000 won, comparatively lower than other similar devices.

“It took us three to six months to make a paper book into an electronic version, but the process has become speedy nowadays with some of the best-sellers being published in both versions simultaneously,” said an official at Yes 24, one of the largest Internet bookstores.

“There still are customers who think the prices of electronics books, which are about 60-70 percent of paper books, are expensive, but that will improve with the growing size of the market.”