Leadership shake-up adds to signs of change in N.K.


North Korea’s ongoing reshuffle of its top brass is adding to signs of change under the burgeoning leadership of Kim Jong-un.

Since taking the reins in December, he has been challenging the military’s iron grip, exposing the reclusive family to the public and retuning the communist state’s economic strategy.

The Swiss-educated, 20-something leader is seen placing economic specialists in powerful positions, while sacking or demoting hardliners who spearheaded his late father’s “military-first” policy.

Reports from state media show that the regime has promoted or reinstated in recent months the four technocrats who played a key role in an unsuccessful economic reform a decade ago ― Park Bong-ju, Ro Do-chul, Kwak Pom-ki and Chon Sung-hun. 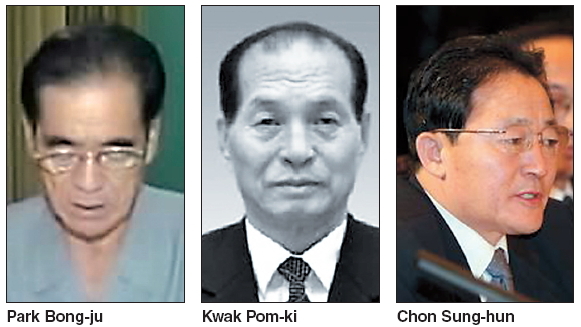 Most significantly, Kim in July dismissed Ri Yong-ho, the military’s powerful general staff chief and one of Kim Jong-il’s closest aides. The National Intelligence Service ascribed the removal to his “uncooperativeness” toward the young Kim’s tighter reins over the military.

“Seizing control of the military, Kim is forecast to pursue a drastic economic reform and openness such as permitting private profit making in trade and commerce, expanding autonomy for businesses and reducing the basic unit of production in cooperative farms,” said Cheong Seong-chang, a senior research fellow at the Sejong Institute.

But the regime rolled back the ambitious program in the mid-2000s as it hiked prices and magnified the pains of the populace, instead of buoying markets and improving productivity. The technocrats were consequently demoted or disappeared from sight.

The North’s Supreme People’s Assembly last week reinstated Chon Sung-hun as a deputy premier. He was dismissed from the post in April 2009 but reportedly put back as metal industry minister in January this year.

Park Bong-ju, a symbol of economic reform, returned to the government in August 2010 and was elevated to light industry minister in April 2012. He served as prime minister from September 2003 to April 2007.

Ro Do-chul is one of the 11 vice premiers and has been serving Kim since he was designated as successor in April 2009. He also accompanied Premier Choe Yong-rim on his trip to China in November 2010, which was aimed at expanding bilateral economic cooperation.

Kwak Pom-ki is a former machine-building industry minister and maintained the deputy prime minister position for more than 11 years until June 2010. He became the Workers’ Party’s chief secretary of South Hamgyeong Province in April this year.

With the grand comeback, the four officials are expected to steer economic policymaking in line with Kim’s fresh guidelines unveiled on June 28.

Some observers even say that their reinstatement may help thaw frozen cross-border ties given their experience in inter-Korean projects. Chon visited Seoul in 2007 as head of the North’s delegation for a joint committee on economic cooperation, while Park led an inspection team that toured the South in 2002.

But the fundamental question is: Will it be different this time?

“It seems that a change is in sight from North Korea’s inner part,” said Chin Hee-gwan, a unification professor at Inje University in Gimhae, South Gyeongsang Province.

“I’d call it Kim Jong-un’s cultural revolution ― Kim is heavily focusing on the people’s livelihoods; and he is apparently interested in musical performances and public and cultural facilities among others.

“I was shocked and surprised watching Choe Ryong-hae, director of the General Political Bureau, walk around and inspect a theme park. Though things like Kim’s ‘musical politics’ or the June 28 measures are not entirely new and have been tolerated under the surface, it’s notable to see them institutionalized and nurtured.”

The regime appears to be phasing out its decades-old rationing system in favor of the so-called June 28 measures, which promise greater autonomy to farmers and businesses.

In another development, Pyongyang and Beijing are accelerating their project for joint industrial zones in the North’s Raseon and Hwanggeumpyeong-Wihwa Islands areas.

While acknowledging positive signals, experts caution against overanalyzing every move made by the unpredictable country.

“Both this personnel reshuffle as well as some other bureaucratic developments suggest a renewed interest in economic development as a policy goal,” said Marcus Noland, a deputy director and senior fellow at the Peterson Institute for International Economics, via email.

“One can make up reasons why things might be different this time: Kim Jong-un is more willing to pursue reforms than his father was; the people involved in the 2002 reforms learned lessons of at least what not to do; after 10 years of frustration, China will be more willing to help if North Korea shows some willingness toward change. (But) the proof of the pudding is in the eating.”

Brian Myers, an associate professor and chair of the international studies department at Dongseo University in Busan, pointed out that the hints have yet to bring about a fundamental policy shift toward economic reform.

“A lot of what Kim Jong-un is now being credited with was started under Kim Jong-il,” he told The Korea Herald via email.

“For fifteen years now the regime has been trying desperately to reconcile economic change with political changelessness. And the virtual impossibility of that task means we will continue seeing people get purged and reinstated, policies stopping and starting.”