The Korea Herald topped the English daily market share with 46 percent in 2011, followed by its two domestic competitors with 28 percent and 26 percent.

In terms of paid circulation, The Korea Herald was the only English-language newspaper that saw an increase last year.

Paid circulation of The Korea Herald rose 1.8 percent year-on-year in 2011, while that of its biggest rival fell 14.7 percent. Circulation of the third-ranked English daily declined 7.4 percent during the same period. 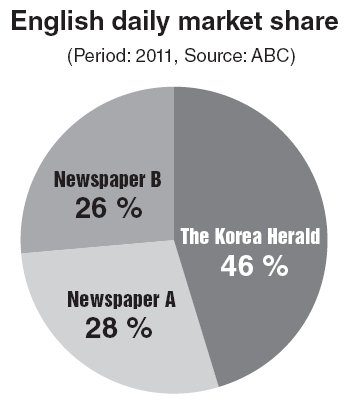 Meanwhile, the local newspaper market has suffered a setback in terms of time spent by Korean media users, according to a survey by the Korea Press Foundation.

Only 25 percent of newspaper readers regularly subscribed to a certain newspaper in 2011, a continued decline from 29 percent in 2010, and 50 percent in 2004.

While an increasing number of Korean newspapers have recently provided online news through mobile application services, two-thirds of them were offered for free as of February, according to the Korean Association of Newspapers.

Out of the 46 association members, 28 newspapers developed their own mobile news applications and 24 of them offered free e-paper services where users can read the news in the same layout as the offline newspaper.

While newspapers provided paid subscriptions on their websites, they did not charge for e-paper services on mobile phones.

The free-of-charge e-paper services on smartphones are expected to hamper the newspaper industry’s ability to attract offline subscribers, the association said.