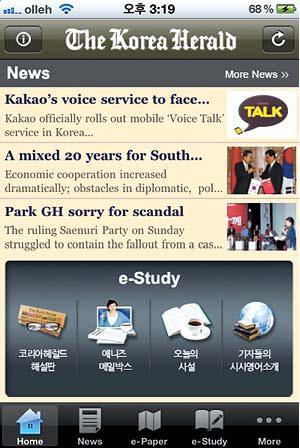 The digitization movement is also rapidly changing the news industry. Gone are the days when people sat on the couch waiting for the 9 o’clock news or the morning paper; tech-savvy people, and even the not-so-tech-savvy are using their gadgets to access news instantly.

The paper started providing news for the Samsung Electronics’ e-book reader and Galaxy Tab in 2010. Then the company introduced a news app for iPhone last year, followed by a similar app for the iPad earlier this year.

In addition to the paid apps, the newspaper also operates a free app on the iPhone, featuring up-to-date news as well as in-depth analyses and opinions.

Immediately upon its release in April this year, it topped the number of news app downloads among Korean users, even overtaking apps by global media giants like the New York Times and Bloomberg. Since then, it has almost never relinquished its top spot.

Buoyed by its success on iPhone Newsstand, The Korea Herald is planning to launch a similar free news application for the iPad, asserting its position as the industry leader.

In yet another bid to expand its target readers, the newspaper launched a new application for Android smartphones in July.

What is more, the new system allows The Korea Herald to better adapt to potential changes in the delivery system. This shows that the paper, already a patron of rapidly changing new media, is fit to respond accordingly to any innovations or overhauls in news reporting environment in the future.

The SMS sends three text messages a day in the form of an English headline and the Korean translation of a key word. It has supported an average of nearly 2,000 subscribers a month since its launch in September 2010.

For most part, SMS has garnered positive response from subscribers.

“I’ve been getting (Herald Topic) text messages for my husband and my child, and it helped with their English studying while providing information about current affairs,” SMS subscriber Lee Hwa-jung said.

Another subscriber Jeon Song-ee said she especially liked the “urgent messages” service, which is sent out when there is breaking news of significant importance.

“Even if it’s the same story, getting the news in English is different (from getting it in Korean),” Jeon added.

Despite being well-received in general, some users have complained about the short length of the SMS, which is confined to 80 characters.

This prompted The Korea Herald to launch an LMS service, which provides up to 1,000 characters with translations of several English words and key phrases.

The new two-way strategy has increased the number of subscribers for the Herald Topic services by approximately 10 percent in five months.

However, innovation by the most-widely recognized English newspaper is far from over, as it strives to keep pace with rapidly changing global society, vowing to utilize its 59 years of experience in providing English news and education.