Toyota Motor Corp. said April-June profit zoomed to 290.3 billion yen ($3.7 billion) from 1.1 billion yen the year before. Its new sales target would represent a 23 percent increase from the 7.95 million vehicles sold in 2011, and is 180,000 vehicles more than Toyota’s last forecast in February.

The car maker’s quarterly sales soared nearly 60 percent to 5.5 trillion yen ($70.5 billion), rebounding from a sales crash that all Japanese automakers suffered after the earthquake and tsunami in northeastern Japan in March last year.

Toyota said quarterly vehicle sales nearly doubled from the year before to 2.3 million vehicles as sales rose in regions including North America, Europe, Japan and the rest of Asia. The regaining of U.S. market share is crucial for Toyota as that is where it makes the bulk of its profits.

Toyota, which makes the Camry sedan, Lexus luxury model and Prius hybrid, has had hard times in the past several years, including recalls of more than 14 million vehicles that began three years ago and came amid faltering global demand from the financial crisis.

The March 11 disasters in Japan, followed by the floods in Thailand, added to Toyota’s hardships.

But Toyota has been recovering. For the first half of this year, it regained its spot as the world’s top automaker in global vehicle sales, beating U.S. rival General Motors Co., as well as Volkswagen AG of Germany. Toyota officials have played down the importance of being No. 1. 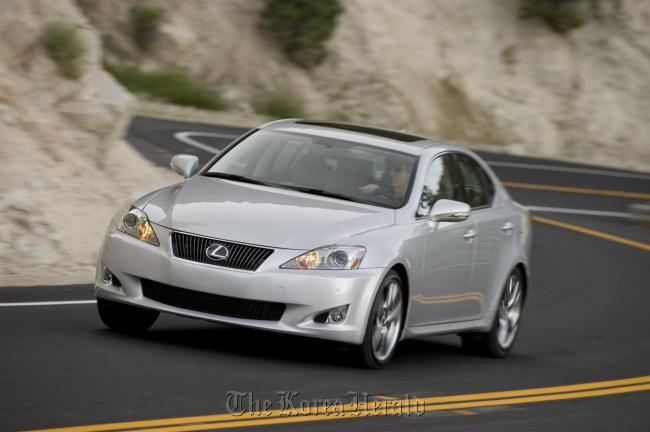 Friday’s sales target, if achieved, would be a record for Toyota, founded 75 years ago. Before the spate of quality problems, Toyota had made no secret of ambitions to reach global sales of 10 million vehicles. Toyota’s past sales record was achieved in 2007, at 9.36 million vehicles.

After the recall debacle, President Akio Toyoda, the grandson of the company’s founder, had taken on a more a humble tone, playing down the growth strategy of his predecessor, Katsuaki Watanabe, and stressing fun and quality products. But even Toyoda has recently started to stress growth.

The company said it carried out cost cuts totaling 70 billion yen ($897 million) for the latest quarter, offsetting the negative effect of a strong yen, which erased 40 billion yen ($513 million) from operating income. A strong currency hurts Japanese exporters such as Toyota by eroding the value of overseas earnings.

Senior Managing Officer Takahiko Ijichi said the company left its full-year earnings forecasts unchanged because of the weakening euro and other risks.

“Toyota’s recovery has been a remarkable one this year,” he said. “Customer loyalty for Toyota products turned out to be much stronger than we anticipated.”

Adding to its upbeat prospects is Toyota’s popularity in relatively new markets such as Indonesia, India and China. Toyota has been increasing overseas production in recent years in an effort to avert damage from a strong yen.

Other Japanese automakers are also recovering.

Toyota stock closed at 3,065 yen, up 0.7 percent. The results were announced after trading ended on the Tokyo Stock Exchange.