After years of driving Korean cars, Chung Ji-eun, a 33-year-old businesswoman, recently purchased a Benz C-Class sedan for herself.

“I used to enjoy shopping for European designers’ bags or shoes. But the satisfaction level with the Benz was the highest,” she said.

“I like the luxury design and performance. But, above all, I feel more confident driving alongside the tough male drivers on the road.” 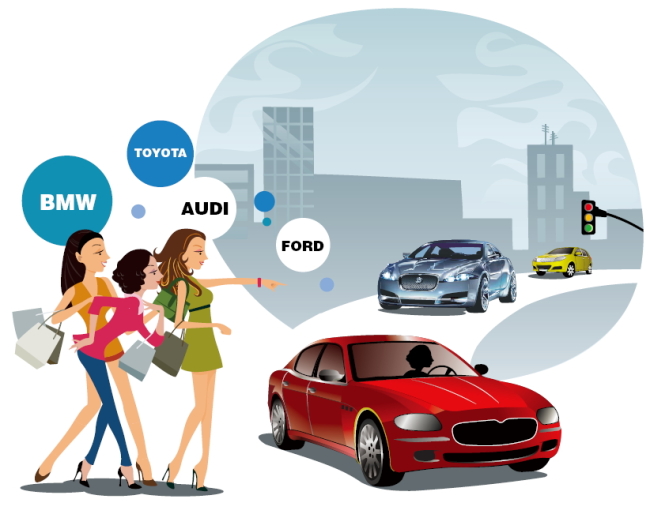 With their number growing recently, female drivers are expanding their presence in the local car market, especially the market for import car brands that are seeing soaring popularity.

For Korea’s largest carmaker Hyundai Motor, 25 percent of customers are women. At the same time, the figure for import cars is 40 percent on average.

Hyundai, which claims about 40 percent of the domestic car market, said it is very difficult to figure out the exact number of female customers in Korea since many of them buy cars in the name of their husband or father.

Thus far, compact cars with cute styles such as Nissan’s Cube and BMW’s Mini have been favored by female drivers here.

“For all Nissan cars, the male-female ratio is about 6:4. But for the pastel-colored Cube, the figure is nearly 5:5,” said a Nissan Korea spokesperson.

“I feel the preference of females has become a more important factor in choosing cars (to sell) here.”

According to BMW Korea, the biggest selling foreign brand in Korea, 40 percent of their customers are also female.

A rising trend is the moderate growth in the number of women choosing sport utility vehicles in recent years, a BMW Korea PR official said.

“The age of our drivers is getting younger and the rate is more aggressive. And the number of female SUV drivers is increasing 2 to 3 percent every year nowadays,” he said.

Drivers say import cars are easier for women to drive as most of them are high-performance, luxury vehicles. Of course, the nation’s never-abating appetite for luxury goods may have also affected the growing trend.

Roh Hyun-jung, 50, drives the BMW 5-Series sedan that she bought two years ago on the recommendation of her husband, who still drives a Korean car.

“Driving a BMW requires a middle-aged woman like me to spend less energy. The luxurious interior design was also another reason for choosing the car,” she said.

Kim Jeon-kyu, who teaches at a local driver’s training institute, gave an interesting perspective based on a driving culture unique to Korea.

“I sometimes recommend my female students to buy an import car,” he said.

“Female drivers, especially those who have just started driving, are highly likely to be bullied by tough male drivers here. But if you drive a luxury car, they would just avoid you because they are well aware of the high maintenance costs.”