Behind these stunning performance, particularly abroad, there might be a speedy management of the companies pushed by the automotive group’s chairman Chung Mong-koo and his son Eui-son, experts said.

Hyundai rushed to push fuel-efficient, small vehicles into the depressed European market, which led to the sales boost, the analysts said.

“It only took 18 months for Hyundai Motor’s i30 to go through research and development to enter local markets (in foreign countries),” said Cho Cheol, a senior researcher for Korea Institute for Industrial Economics and Trade. 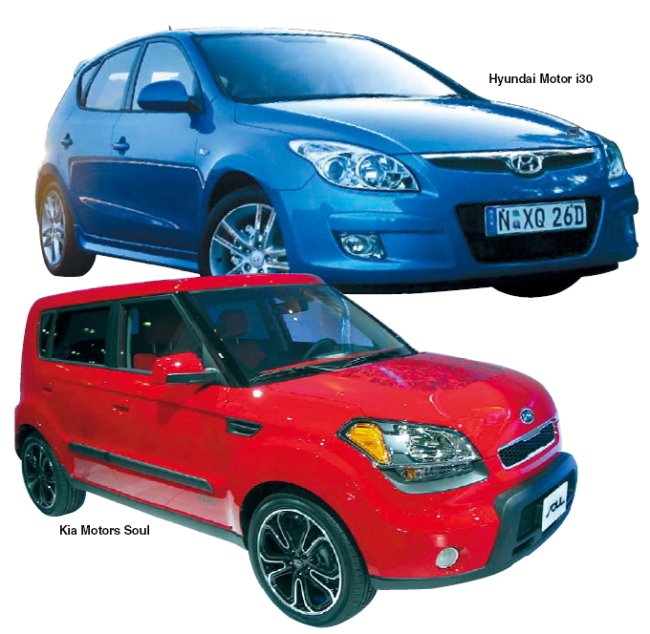 “Considering that it takes at least three years in general to launch a new car, (Hyundai) made a landslide victory in the speed war.”

Hyundai Motor announced its sales volume worth about 42.1 trillion won ($36.7 billion) in the first six months this year, up 9.9 percent in year-on-year sales. Its record-high operating profit jumped 21 percent to 4.78 trillion won.

“All sorts of electronic devices are being added to the automobiles, and such a trend will be even more widespread as time goes,” Hyundai-Kia vice chairman Shin Jong-woon said in the Federation of Korean Industries summer forum held in Jeju on Thursday.

“There will be a huge gap among companies that comply with such trends and those that do not.”

Major manufacturing plants at home and overseas are elaborating on risk-managements regarding natural disasters such as tsunami through simulations.”

On May 8, a fire broke out in one of the three sections of the paint shop in Hyundai Motor’s Beijing No.1 plant, which halted production for 17 days until restoration.

The vice chairman said that the two automakers aim to make sell over 7 million cars annually.

Hyundai-Kia’s sales increased in all global markets with the only exception of the domestic market. The carmakers’ first half reports say that domestic sales dropped by 4 percent, whereas the sales increased by 19 percent in Europe, 14 percent in the U.S., and 11 percent in China.

Vernacular news reports said that three segments of Hyundai and Kia ― small, subcompact and medium cars ― have placed No.1 in sales in the U.S., their biggest market, in June. Kia’s Soul holds about an 82-percent share in the U.S. small box car market.

“Qualitivity” ― a combination of “quality” and “productivity” ― is the shortest explanation of Hyundai-Kia’s global strategy, the vice chairman said.

“We have been working on raising the technology and flexibility in production to meet such objective.”

Hyundai-Kia declared to boost “qualitivity” by raising the malfunction-free rate ― the rate of products free of malfunctioning in the first three years of purchase over total products ― from current 78 percent to 85 percent.

The automakers claimed that Hyundai Motor’s plant placed No.1 among 70-some automobile plants in quality assessment ever since they launched the qualitivity strategy. Hyundai Motor also said that its Czech plant which produces i40 became No.1 non-European automaker in quality for the first time during the same period.