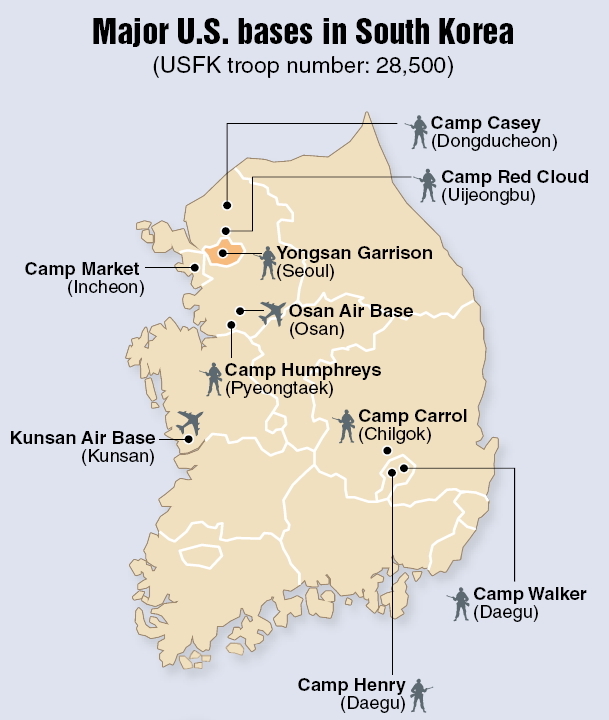 This is the fourth in the series of articles on America’s refocus on the Asia-Pacific region and the possible impact on its alliances with South Korea and Japan. ― Ed.

The battle-experienced general has recently asked Washington to send more attack helicopters and anti-missile defense systems. He is also reported to have floated the idea of maintaining the Combined Forces Command rather than disbanding it as planned.

He also suggested turning the 2nd Infantry Division into the allies’ combined unit and maintaining the 210th Fires Brigade north of Seoul rather than relocating it to Pyeongtaek, according to reports.

This move has raised some questions over whether Washington is readjusting its policy prioritizing its troops’ strategic mobility for rapid deployment overseas and refocusing on deterrence capabilities against the North.

Some observers noted that as the move comes amid America’s strategic pivot toward Asia, the U.S. may capitalize on Korea’s geostrategic position to deter North Korea and keep an increasingly assertive China in check.

“Based on reports, Gen. Thurman appears to focus on his duty as USFK commander while carefully watching security conditions on the peninsula and unpredictability surrounding the North Korean regime,” said Nam Chang-hee, political science professor at Inha University.

“Against the backdrop of America’s deepened engagement in the Asia-Pacific, Thurman appears to have high expectations about enhanced military cooperation with Seoul. He also appears to feel a sense of responsibility to help address South Koreans’ security concerns.”

A recent series of moves by Thurman appear to have been affected by his family background and ample battle experience.

His grandfather fought in World War I, his father and three uncles in World War II and the Korean War and his elder brother in the Vietnam War. Thurman participated in the Gulf War in the early 1990s and led the 4th Infantry Division in Iraq in 2006.

Under the Mutual Defense Treaty, which Seoul and Washington signed in October 1953 after the Korean War ended in a ceasefire, the primary role for the USFK was to deter North Korea’s possible aggression and defeat it should the deterrence fail.

From a broader perspective of America’s global strategy, the USFK, along with its troops in Japan, also play a central role in blocking the communist expansion and maintaining its regional preeminence.

For the U.S., South Korea was the frontline on which it dispatched a large number of ground troops, some of which were to be automatically involved should another conflict take place.

Consisting mainly of naval and air forces, the troops in Japan played a role to provide rear-area logistical support.

Currently, there are seven U.N. rear bases including Camp Zama near Tokyo; Kadena Air Base, the hub of America’s airpower in the Asia Pacific; and Yokosuka Naval Base, the largest U.S. Navy installations in the Western Pacific.

The presence of American troops here not only prevented the North from invading the South. By holding operational control over all South Korean forces, the U.S. military also blocked the South from advancing into the North.

South Korea’s first President Syngman Rhee had long threatened to advance into the North and achieve reunification, a move scholars say is aimed at pressuring the U.S. to offer more security support.

After the Korean War broke out, South Korea handed over operational control to the U.S. Peacetime OPCON was returned to Seoul in 1994 and wartime OPCON is to be transferred in December 2015.

After the Berlin Wall broke down in 1989 and the Soviet Union collapsed in 1991, the need to keep an eye on the Soviet Union disappeared. But the USFK’s role to deter North Korea’s aggression was still prioritized as its provocations continued unabated.

During the post-Cold war era, the U.S. had more flexibility in operating its troops on the peninsula as its main adversary collapsed. America, then, increased its demand for South Korea to take a leading role for its defense, and moved to scale back its troops.

Against this backdrop, South Korea assumed a greater role in guarding the heavily fortified border and its Army general began representing the U.N. Military Armistice Commission in 1991.

A South Korean general also began undertaking the position of the ground component commander under the allies’ Combined Forces Command in 1992. The post had been occupied by the CFC commander.

During this time, however, American troops’ operational priority was still on deterring the North as the belligerent state continued to pose a threat to peninsular security with its development of missiles and nuclear weapons.

Even though the USFK withdrew all tactical nuclear arms from the South in 1991, the North continuously developed nuclear programs. In 1993, Pyongyang declared that it would drop out of the Nuclear Non-proliferation Treaty.

After the terrorist attack in the U.S. on Sept. 11, 2001, Washington reshaped its global military strategy to deal with threats whose geographical locations and types of aggression are hard to ascertain.

The incident that struck the Pentagon in Washington and the World Trade Center in New York sent shockwaves across the globe. It took the lives of more than 3,200 people from some 80 countries.

From then on, the U.S. has focused on making its military leaner, agile and quickly deployable to respond to unprecedented threats around the world such as terrorist attacks.

This move also affected the USFK operation. In 2004, some 3,600 troops of the 2nd Infantry Division were taken out to support U.S. military operations in Iraq. In the same year, the allies also agreed to relocate the U.S. bases in Seoul and north of the capital down to Pyeongtaek, Gyeonggi Province.

After a decade of war in Iraq and Afghanistan, the U.S. is reorganizing its military and diplomatic priorities toward the economically vibrant Asia-Pacific region.

Under this move, observers said the USFK along with U.S. troops in Japan would play a key role in keeping an eye on China, which has increasingly flexed its muscles, particularly in the South China Sea.