As the cornerstone of peace and stability on the Korean Peninsula, the U.S. Forces Korea have undergone adjustments in scale, deployment and strategies in line with changing regional and global security environment for the past 60 years.

U.S. troops first entered the Korean Peninsula in September 1945, less than a month after Korea was liberated on Aug. 15 from Japan’s 36-year colonial rule. Their mission was to disarm Japanese troops and help establish the government system south of the 38th Parallel, a line drawn by the United States and the Soviet Union.

In the year, the U.S. stationed its 24th Army Corps under which it dispatched its 7th Division, 40th Division, 96th Division, and other support units. These divisions took charge of the U.S. military government in the South.

The U.S. dispatched its 6th Army and 8th Army in Japan after dropping nuclear bombs in Hiroshima and Nagasaki on Aug. 6 and 9, respectively, and securing a surrender from Japan.

After the South Korean government and its armed forces were established in August 1948, the U.S. began withdrawing its troops from Korea as Washington thought Europe was of greater strategic value than the peninsula.

South Korea’s first president, Syngman Rhee, vehemently opposed the pullout due to the expected security vacuum. He threatened to “advance into the North and achieve reunification,” a move to apparently pressure the U.S. to delay the withdrawal and offer stronger security support.

As part of its post-war military realignment, the U.S. began reducing troops in East Asia. In June 1949, it pulled out all troops in Korea except for some 500 of the U.S. Military Advisory Group.

As a result, the 24th Corps was dissolved while the 6th Army in Japan was withdrawn and the 8th Army was reduced to a unit of only four divisions. These American troops belonged to the then Far East Command in Japan.

A large number of American troops returned to the peninsula after North Korea invaded the South on June 25, 1950. During the three-year fraternal conflict, the U.S. dispatched more than 320,000 troops to the South.

Some 20 days after the outbreak of the war, President Rhee relinquished “command authority” over all Korean forces to Gen. Douglas MacArthur, the Far East commander at the time who also headed the United Nations forces on the peninsula.

Scholars said Washington, at the time, interpreted that the call for “command authority” did not include control over military administration, as it believed the decision was wrongly translated into English since the term was normally used as a comprehensive concept.

The U.S., then, deployed to Korea all units of the 8th Army in Japan except the 7th Division.

Even after the war ended in a ceasefire in July 1953, Rhee continued to threaten to advance into the North while calling for firm security support from Washington.

Apparently to assure Rhee of its security commitment and establish legal grounds for its troop deployment on the peninsula, the U.S. officially signed the Mutual Defense Treaty with South Korea in October 1953.

The treaty did not clearly state whether the U.S. military should immediately intervene in case of another North Korean aggression. But America’s troop dispatch near the heavily fortified border tacitly ensured its automatic involvement as the so-called “tripwire,” a term the U.S. disliked for its negative connotations.

In November 1954, Seoul and Washington also drew up the “Agreed Minute Relating to Continued Cooperation in Economic and Military Matters,” a document that ensures the U.S. continues to possess “operational control” over South Korean forces.

Command authority is a more comprehensive concept compared to operational control. The former covers the entire operational authority except for control over logistics and administrative affairs while the latter refers to limited authority concerning operational objectives and troop assignment.

In 1957, the number dropped to around 70,000. Around this time, amid Japan’s calls for U.S. troop reduction, the U.S. dissolved the Far East Command and moved a large number of its troops to the Pacific Command in Hawaii.

As it sought to modernize its military in Korea, the U.S. began bringing in tactical nuclear weapons and delivery vehicles including “Honest John” surface-to-surface missiles in 1957.

Many of the nuclear arms stored in Japan were deployed to the South as anti-nuclear sentiment ran deep in Japan, which smarted from bitter memories of the nuclear bombings in 1945.

America’s military modernization came as the communist bloc continued to strengthen its military assets in the North. The U.S.-led U.N. declared the invalidation of part of Clause 13 under Article II of the Armistice Agreement. The part banned the introduction of reinforced combat aircraft, armored vehicles and other weapons.

In 1968, the relationship between South Korea and the U.S. deteriorated as Seoul became frustrated that Washington seemed indifferent about North Korea’s shocking guerilla attack on Cheong Wa Dae on Jan. 21, 1968.

Washington appeared to care only about the safety of the 83 crewmembers of its intelligence-gathering USS Pueblo hijacked by North Korea in the international waters of the East Sea on Jan. 23 of the same year.

One sailor was shot to death during the hijacking and the rest were released some 11 months later.

Apparently to defuse tension between the allies, the U.S. offered to strengthen its security support. As part of that, the two countries agreed to hold a defense-ministerial meeting on a yearly basis. The talks turned into the Security Consultative Meeting in 1971.

As the number of crimes involving U.S. service members increased, the allies effectuated the Status of Forces Agreement in 1967 to govern the legal status of U.S. troops in Korea. It was updated in 1991 and 2001.

As anti-war sentiment ran through the U.S. due to the costly, unsuccessful war in Vietnam, President Richard Nixon put forward his doctrine calling on America’s allies to take care of their own military defense in 1969.

In line with this doctrine, the U.S. scaled down its troop number in Asia. Seoul opposed the plan, arguing that it was not the right time for the drawdown, given threats from the North and the 50,000 Korean troops deployed to Vietnam.

The American troop number, which stood at 63,000 in January 1969, dipped to 43,000 in December 1971. During this time, the U.S. pulled out its 7th Infantry Division and relocated its 2nd Infantry Division further south from the Demilitarized Zone.

To offset the negative impact of the reduction, the allies established the Republic of Korea-U.S. 1st Corps, a combined unit dedicated to defending the western frontline, in July 1971.

The move toward the troop cut continued as a reconciliatory mood was forged amid Sino-U.S. detente. Washington also sought to warm ties with the Soviet Union as the two signed deals to limit their arms race.

After Jimmy Carter took the presidential office in 1977, his human rights-based foreign policy caused friction in relations with South Korea, which was at the time led by General-turned-President Park Chung-hee. 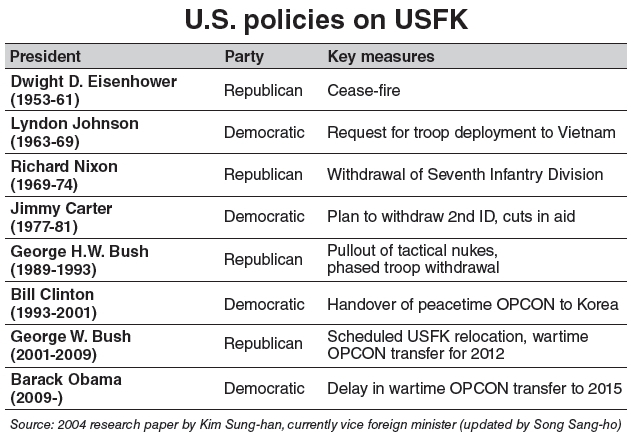 The previous year, Carter made his election pledge to withdraw troops in Korea. At the time, public sentiment against Korea worsened due to Park’s dictatorship and a high-profile lobbying scandal, dubbed “Koreagate.”

Park’s pursuit of nuclear weapons in the early 1970s also undermined ties with the U.S. As Washington improved ties with Beijing and scaled back its troops during the period, Park felt the need for nuclear arms.

Carter’s withdrawal plan faced strong opposition from security officials as North Korean threats continued with its key ally Japan apparently worried about regional security challenges. The plan ended with a cut of only about 3,000 troops in 1978.

Seoul and Washington established the Combined Forces Command in 1978. The U.N. Command delegated operational control over Korean forces to the CFC.

The move came after the U.N. General Assembly passed a resolution to disband the UNC in 1975 following calls from the communist bloc. But the resolution was not strictly binding and the UNC still exists to oversee the implementation of the Armistice Agreement.

After the Soviet Union expanded its influence in Africa and elsewhere, and attacked Afghanistan in 1979, the U.S. adopted a more aggressive military policy to block the communist expansion.

Against this backdrop, unlike his predecessor, then President Ronald Reagan did not take issue with the human rights conditions in South Korea and sought to enhance ties with General-turned-President Chun Doo-hwan. In 1981, he cancelled the plan to withdraw forces from the peninsula.

Tension between the Cold War foes eased after reform-minded Mikhail Gorbachev became general secretary of the Communist Party of the Soviet Union in 1985 and the Berlin Wall was torn down in 1989.

With the collapse of the Soviet in 1991, the U.S. sought to reduce its troops in Asia amid growing domestic calls to cut defense spending.

Based on the “Nunn-Warner amendment bill” Democratic lawmaker Sam Nunn and Republican John Warner submitted in 1989, the U.S. mapped out the “East Asia Strategic Initiative,” under which it reduced its USFK number to some 36,000 by cutting 7,000 troops between 1990 and 1992.

After Bill Clinton took office in 1993, the troop reduction in Korea stopped as he recognized potential economic interests in the Asia Pacific and thus felt the need to maintain America’s strong military presence in the region.

In 1994, Washington handed over its peacetime operational control to Seoul.

In 1995, the Clinton administration unveiled the East Asia Strategic Report that stressed a freeze on the troop reduction, continued engagement and allies’ increased share of the cost for the upkeep of U.S. troops.

After the unprecedented terrorist attack on the U.S. on Sept. 11, 2001, the George W. Bush administration reorganized its military strategy and troop alignment to better deal with new threats whose origins and locations were difficult to ascertain.

In 2004, the allies also agreed to relocate the U.S. bases in Seoul and north of the capital down to Pyeongtaek, Gyeonggi Province.

As the Roh Moo-hyun administration sought to enhance its military’s self-reliance and balance the alliance with the U.S., the two countries agreed in 2007 to transfer wartime operational control in April 2012.

But amid continuing provocations by North Korea, the leaders of the two countries agreed in 2010 to delay the OPCON transfer to December 2015.