The biggest difference between rivals Apple Inc. and Samsung Electronics is the U.S.-based company’s integration of hardware and software.

While Apple thrives on its mobile operating software iOS, introducing it exclusively for its wireless devices, Samsung and LG Electronics both make greater use of Google’s Android platform.

Samsung, dubbed to be the world’s top smartphone maker in the first quarter, developed a proprietary mobile platform called Bada, but it is not quite attracting the firm’s desired number of app developers or users. 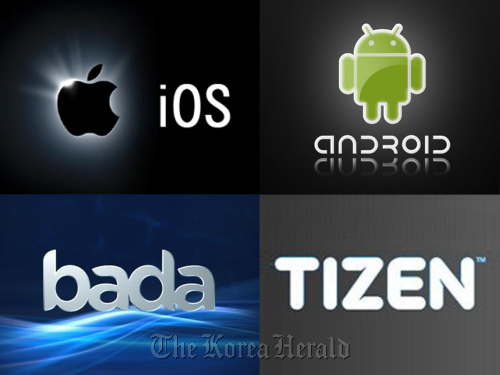 Offered at an affordable price, the Bada phone is reported to be gaining popularity in some European countries such as France.

But Bada phones are recording low shares in its home turf, one of the most wired countries in the world that is dominated by Apple’s iPhone and smartphones running on the Android OS.

Possibly seeking to alter that trend, Samsung, together with the Linux Foundation, is gearing up to roll out a new open source, standards-based software platform called Tizen.

The new Tizen, which is targeted to be applied to smartphones, netbooks and smart televisions, is planning to release its first gadget running on its platform within this year.

“Samsung is currently integrating Bada and Tizen. This is technologically possible and it indicates that people will be able to make use of Bada apps on smartphones operating on the Tizen platform and vice versa,” an industry executive who is familiar with the matter told The Korea Herald. “Samsung will also become the firm to roll out the first reference phone for the Tizen OS for it was the first electronics manufacturer that had the initiative to proceed with the project.”

Earlier, Samsung executive Kang Tae-jin also told reporters at the Las Vegas consumer electronics trade show that the firm is in the process of unifying the two different platforms into one.

However, a Samsung spokesman denied assumptions that a converged mobile platform will be unveiled at next week’s conference.

“We don’t have the details of the merger and it is yet too early to discuss it,” the official said.

The first-ever Tizen Developer Conference will be held for three days beginning next Monday in San Francisco to provide demonstrations and information sessions.

“Tizen provides a robust and flexible environment for application developers, based on HTML5. It is rapidly becoming the preferred development environment for mobile apps and services,” said officials at the Tizen Association.

While the move for a Bada-Tizen merged OS is still on the watch, the association will need to win the hearts of the developers for the success of the new platform for mobiles, according to industry watchers.

“Bada phones had the affordable pricing, well-performing hardware that also came with a sleek design, but the problem lied in the number of available mobile application,” said an industry source who wished to remain unidentified.