The two firms plan to provide the special edition of the Galaxy Tab 10.1 to those who pre-register to purchase the to-be-released sedan by June, according to Samsung officials.

The move comes after the two jointly developed a customized solution for the owners of the newly launched car. The new K9 is scheduled to be released next Monday. 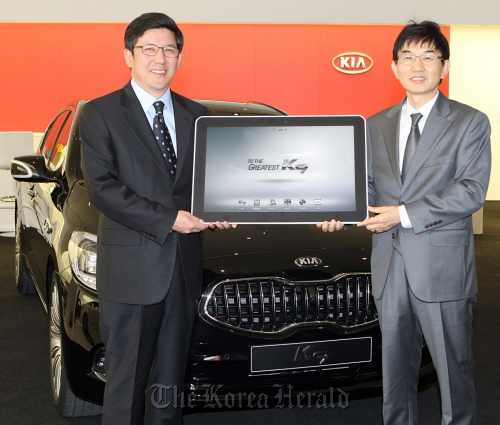 With its focus on the “smart life” concept, Samsung and Kia have been cooperating from the beginning stage of development to meet the customers’ needs and to create an optimized product such as a friendlier user interface, Samsung officials said.

“This is a case where one could see synergy between an electronics device, Galaxy Tab, and a vehicle,” said Kwon Song, vice president of business-to-business sales unit at Samsung Electronics. “We further plan to offer more variety by converging with different sectors such as education, medical and mobile office.”

The Galaxy Tab 10.1, a version which runs on the wireless internet network, enables the owners of K9 to quickly adapt to their new vehicles by giving them a quick guide of the vehicle, its officials said.

“The Galaxy Tab has been supplied to upgrade the premium value of K9 that is the outcome of high technology,” said a Kia executive. “We expect that the level of convenience for K9 owners will rise with the joint launch.”