It is not uncommon to see public figures suddenly fall into disgrace and infamy due to reckless comments made in a public place or interview with the media.

But in the era of Facebook and Twitter, people are now faced with the bewildering reality that a single careless comment on social networks, even years ago, could backfire spectacularly.

A striking case in point is Kim Gu-ra, a comedian who built up his career through intentionally fiery comments that had long entertained TV audiences. Kim recently exited from all the TV shows he was hosting after suffering a public setback over his crass joke about Korean women forced into sexual slavery for the Japanese military during World War II.

What crushed Kim’s otherwise high-flying career, at least for now, is a problematic comment he made in 2002. A local online user posted the audio clip in an Internet community, which quickly went viral and prompted cyber pundits to lob criticism at the comedian, whose trademark ability is to talk nasty. 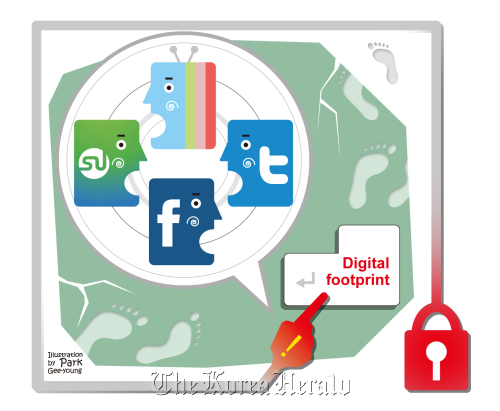 The list of victims from the super fast circulation of negative comments and compromising photos on the Internet as well as social networks is growing rapidly. For instance, Democratic United Party candidate Kim Yong-min failed to win in the general elections early this month due largely to his similarly offensive remarks dug up by the media and circulated through cyberspace, particularly through online social networks.

The implication, experts said, is that people should take steps to minimize the negative impact from the rapid spread of what is termed the “digital footprint” of cyberspace. Not only public figures but also ordinary people could fall victim to the phenomenon because all blog comments, photos and tweets are now easily searchable on Google and other online archives. Adding to the headache is that personal digital records are hard to remove from the Internet completely.

“Online social networks are forcing people to be careful about what they do in cyberspace because a single sentence they made years ago could kill their career overnight,” Kim Jong-rae, director of KPR Social Communication Research Lab, told The Korea Herald.

Kim, a leading expert on social media trends, said that the rapidly growing pool of digital footprints has a “double-edged sword.” A biased or careless comment could be overblown, leaving innocent victims in its viral wake. At the same time, though, the public could better judge a public figure because their records are readily available on the Web, Kim said.

“It is now possible to search deeply about famous people, tracking what they did in the past and digging up old comments they made that are still preserved somewhere in the Internet,” Kim said. “As digital footprints shape individual’s social media reputation, now everyone should take care of their own online reputation.”

Individual users, however, find it hard to accept the new reality that casual comments on Twitter, Facebook and other social media should be meticulously monitored and managed.

“Given that online social media is completely open to everybody, individual users should be in charge of what they do, but I don’t think it’s desirable to judge a person based on old online comments,” a Twitter user told The Korea Herald, wishing to remain unnamed.

To prevent abuse, posts on Twitter and other social media should be saved in a separate system in the form of private archives on a regular basis, she said.

Bae Jin-chul, chief of the R&D team at DMC Media, said the dispute over digital footprints and online reputation is inevitable.

“Only a few years ago, similar privacy problem arose when the majority of Korean online users signed up for Cyworld,” Bae said, referring to the once dominant homegrown social media service that is now faced with challenges from Twitter and Facebook.

“The dispute itself is positive because policymakers and businesses are now encouraged set up new systems to protect privacy and at the same time promote social networks,” he said.

In principle, Bae said, individual users should be aware of the potential danger of putting too much private information on the Web, especially personal schedule and whereabouts that could be exploited by criminals.

KPR’s Kim Jong-rae said one simple safety measure is to search Google, Naver and popular portals regularly to check out results based on keywords related to one’s name, email ID, and other personal information.

“If the results reveal too much about your private information or your life in the workplace, you have to make sure such detailed digital footprints are be removed from the online archives as much as possible. After all, we are living in an era where only a couple of mouse clicks could destroy a person’s digital reputation,” Kim said.