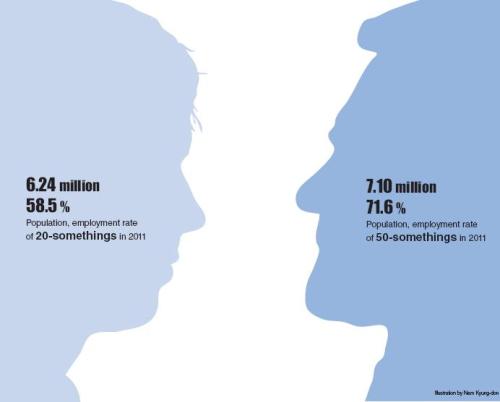 Debate under way on extension of retirement age

Among more than 2,600 applicants to become cashiers and online pickers were hundreds of retired corporate executives, bankers and school principals. About 70 of them held a master’s degree or doctorate.

Although paid less than younger regular staff, most of the older employees felt satisfied with being placed on the payroll again.

“It’s a win-win for us and the retirees seeking a new job,” said an official at Lotte Mart, which plans to employ 600 more job-seekers in their 50s in the latter half of the year.

These moves by the two retail chains appear to be in line with a trend in which people want to or are forced to work beyond formal retirement. 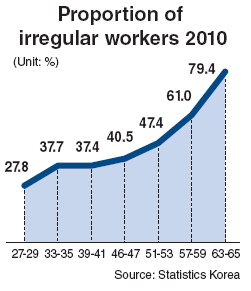 With the country’s 6.95 million baby boomers -- those born between 1955 and 1963, who account for 14.3 percent of the population -- beginning to leave the workforce, calls are mounting for raising the retirement age.

But social consensus still remains beyond reach. Some express concerns that extending retirement age would lead to a further reduction in job opportunities for young people, whose jobless rate is hovering around 8 percent.

In a reflection of the sensitivity of the issue, a body set up to work out measures to keep baby boomers in the workforce could not agree to raise the corporate retirement age to 60 after a year of discussions ending in March 2011.

A participant on the 16-member subpanel, which operated under a trilateral commission run by the labor, management and government, said the “debate became stalled as the possibility of intergenerational conflict over jobs was raised.”

Representatives from management argued that social environment and institutional infrastructure should be forged first, with government policymakers backing them by calling for a “cautious” approach. 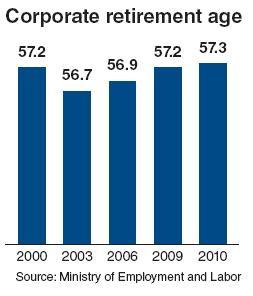 According to figures from the Ministry of Employment and Labor, the average retirement age at workplaces with more than 300 employees has remained little changed at around 57 over the past decade. Public servants are set to retire at 60.

The trilateral commission launched another subpanel on “co-existence between generations” earlier this month. Planned to operate for one year, it is tasked with drawing up methods to increase jobs in a way that avoids a zero sum game that forces a choice between jobs for the young and employment for the old.

Debate has raged among experts over the correlation between extended working age for the older generation and reduction in job opportunities for the younger generation.

Many labor experts have argued that extending the retirement age has little impact on youth employment, saying concerns over intergenerational competition or conflict over jobs are exaggerated in most cases.

“On the level of an individual company, they may appear to be substituted for each other,” said Phang Ha-nam, a senior researcher at the Korea Labor Institute, a non-profit research organization in Seoul.

“From the viewpoint of the whole economy, however, they are not seen as conflicting with each other,” he said.

But a report released by the Samsung Economic Research Institute last year suggested job opportunities for young people have been at least partly substituted by the elder generation’s extended employment since 2005.

“It would be desirable for jobs to increase at the same time for both the older and younger generations, but in reality that is not the case,” said Tae Won-you, a SERI research fellow.

Tae noted that corporate efforts to avoid massive layoffs through job sharing and other labor-management concessions in the economic recession led to further reducing the room for hiring young people entering the labor market.

Figures from Statistics Korea showed the employment rate of 50-somethings rose from 68.1 percent in 2005 to 71.6 percent in 2011, while that of 20-somethings fell from 61.2 percent to 58.5 percent over the cited period. The rate for the economically active population as a whole aged 15-64 stood at 59.1 percent last year, up 0.4 percentage point from the previous year.

The number of employed people climbed by about 415,000 from a year earlier in 2011 and around 70 percent of the new employees were in their 50s.

Some experts say that the youth unemployment problem is expected to be alleviated from 2015 when retirees begin outnumbering college graduates.

The Employment and Labor Ministry estimates the number of new college graduates will reach about 502,000 in that year, compared to some 541,000 workers expected to retire at age 57.

According to the SERI report, however, intergenerational tension over jobs is expected to linger until 2018, when the last batch of baby boomers enters retirement.

Government officials suggest they will not hurry to extend the retirement age, reflecting their more sense of urgency with which they handle the high youth unemployment. Including those who have given up looking for jobs, one in five young people is actually jobless, experts note.

While admitting the country’s retirement age is too early, Employment and Labor Minister Lee Chae-pil recently said his ministry would not impose “artificial guidance” on corporations to raise the retirement age for their employees.

Strategy and Finance Minister Bahk Jae-wan has proposed placing the focus of policy on hiring young job-seekers by 2014 and then considering increasing retirement age.

Some labor policymakers suggest the government may move to obligate companies to extend retirement age to 60 in 2017.

In what appears to be a bid to woo senior voters in the run-up to the April parliamentary elections and the December presidential poll, political parties have pledged efforts to raise the retirement age beyond 60 to fill the gap with the age eligible to receive state pension payments.

Some companies have already increased the retirement age to avoid the shortage of skilled workers that may accompany the retirement of baby boomer workers.

Hyundai Heavy Industries, the world’s largest shipbuilder, has allowed those coming up to retirement age to work for an extra year.

POSCO, one of the world’s leading steelmakers, increased its retirement age from 56 to 58 last year.

GS Caltex, a major oil refiner, is working on extending its retirement age by two years to 60 from this year, company officials say.

Experts indicate that the need to prolong the working period becomes increasingly urgent with most baby boomers having insufficient money to stop working at the formal retirement age and their life expectancy rising. The proportion of people aged 65 or older, which expanded from 7.2 percent in 2000 to 11 percent in 2010, is projected to climb to 13.9 percent in 2015 and 15.5 percent in 2020, according to Statistics Korea. 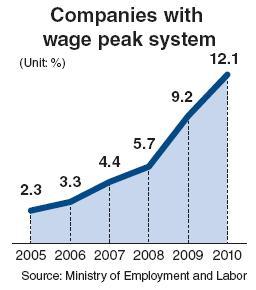 Retaining senior and aged people in the workforce will also help ease the pressure on the pension system, which some researchers worry will be exhausted by the mid-2050s if current trends continue.

A recent report by the Bank of Korea estimated the increase of retirement age by four years would lead to an average rise of 0.051 percent in annual economic growth over the period from 2011 to 2050.

Many experts note the restructuring of the wage system is required to ensure a higher retirement age will not lead to a reduction in new employment. As one of the most efficient methods, they suggest the “wage peak” scheme, under which the employees’ pay peaks at a certain age before declining in the years approaching retirement.

“The extent to which the wage restructuring is made will hold the key to whether a higher retirement age and more youth employment can go together,” said Phang, the KLI researcher.

Data from the Employment and Labor Ministry show the proportion of companies with more than 100 workers that have implemented the system increased nearly threefold over the past five years to 12.1 percent in 2010.

Workers are also increasingly receptive of the wage peak system.

According to a survey by the Korea Chamber of Commerce and Industry last month, about 60 percent of employees polled were in favor of the system, with 80 percent of them ready to accept a maximum 20 percent cut in wage.