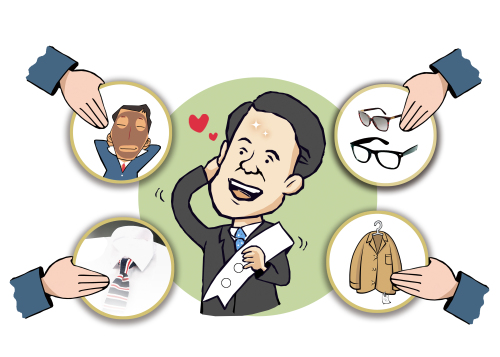 
It is not only policy pledges that candidates are working out and refining to woo voters.

With elections looming, they are busy polishing their images as well, employing the help of experts. Image is important for politicians to communicate with voters. A positive image can be associated with ideology and competence by voters, according to consultants.

“In a visual age, good-looking people, especially with amiable facial expressions, are always welcomed in political circles,” an image consultant who works in Yeouido, Seoul said. “These days, politicians are sort of like entertainers, because for the two jobs, nothing matters more than the public image.”

Beauty is an advantage.

“In the case of Na Kyung-won, former supreme council member of the ruling Saenuri Party, or Rep. Jeon Hyun-heui of the Democratic United Party, beauty may have made a great contribution to their popularity. For some voters, a beautiful face of a woman politician sometimes outshines her policy pledges.

“It’s the same with male politicians. Former Seoul Mayor Oh Se-hoon or Rep. Ryu Jung-hyun of the Saenuri Party draw crowds of fans for their handsome faces and gentle manners. Political insiders often joke that their fans did not like their policies but their faces,” he said.

Those with “less acknowledged beauty” try to offset low scores in appearance in other ways, in some cases successfully.

Park Sun-young, a professor of Kukje College Beauty Design Department, who has helped polish the images of many politicians and has written several papers on politicians’ image, said appearance helps create and boost a “brand” image that is hard to tear down.

“Rep. Park Geun-hye’s peculiar coiffure (styled after her mother, the late first lady Yuk Yeong-su) and constant appearance in trousers have built up a steadfast, trust-worthy yet feminine image. Ahn Cheol-soo, an entrepreneur-turned-philanthropist who is sometimes the subject of media speculation that he may run for president, creates a warm and fresh image with his hairstyle and neat outfits,” she said.

“There is talk that plastic surgeons and dermatologists are raking in money this election year from those who want their faces to look natural yet young. They do not like Botox that could stiffen muscles. They prefer non-incisive, non-permanent operations,” another consultant confided.

Jeong Ki-nam, a Democratic United Party member who sought candidacy in Seongnam of Gyeonggi Province, tried to look like a young, playful but trustworthy next-door uncle. He chose cardigans and warm-tone frames over a stiff suit and austere glasses. He even held a guitar for his promotional shots in order to catch the eyes of young voters as well as middle-aged voters who feel nostalgia for music.

“Red or colorful neckties could add a vibrant and young image. The color of a shirt and pants ― we try to avoid conventional black pants and go with navy or sometimes jeans ― the shade of skin or plastic frames for glasses instead of metal ones help one look much more approachable and likable. Even small items such as a wristwatch or cuff links all do their share in making an image,” Park said.

“Sometimes I ask clients to change their whole lifestyle. It takes months to do so. But all of them follow the instruction, whether they are reluctant or happy to do so,” she said.

“For those who are bold, we try to expose them through active scenes, like making large gestures, running or dancing. We arrange flash mob events or take them to rock festivals and make them wear sneakers. For those who are young, we take them to speech lessons and let them wear dark cloth to give a sense of weight. Styling is essential for complimentary imaging,” said Hwang In-sang, head of the P&C Global Networks, a consulting firm.

Then, how much does “appearance” work for election candidates?

“In 1960, the U.S. Presidential election produced an interesting result. After a TV debate showed a young and vigorous John F. Kennedy versus a seasoned Nixon, polls found a large support for Kennedy.

“But after a radio debate show, Nixon was rated to be more appealing. In the end, Kennedy won. Image has been in the spotlight on the political stage ever since,” he said.

However, image is not always enough.

“For example, when Na Kyung-won tried to bathe a disabled child to show her motherly side, even the journalists at the scene were not convinced because of her luxurious and ambitious image did not match charity works, though in fact she is a mother of a girl with Down’s syndrome,” Kim Dae-jin, head of the political consulting firm, Jowon CnI, said.

“There is no concrete data but Ronald Reagan or Bill Clinton benefited from their good looks. Pundits speculate the preppy and neat features of Al Gore or Mitt Romney could distance supporters,” Yoo said.

Consultants, who are veterans of election campaigns, warn that image could outshine the most important part of elections and politics ― policy.

“It is very dangerous for politicians to rely on image because it fades after a certain period. If they make a mistake that could tarnish their brand, it will be fatal to their political career,” Kim said.

“Image leads to populism, which often leaves politicians empty handed. That’s when voters turn their back from their idols,” he added.

“Democratic politics is about politicians’ suggesting policies and voters supporting their pledges by casting votes and then the elected carry out what they have promised. But a blind concentration on image could bring down the quality of democracy,” he said.