The start of the month saw a headline-making development in the decades-long effort to get North Korea to drop its nuclear weapons program. In exchange for 240,000 tons of U.S. food aid, North Korea agreed it would suspend nuclear tests, long-range missile launches and uranium enrichment at its Yongbyon facility, and allow the return of the International Atomic Energy Agency inspectors.

The response to the deal from many here and in the U.S. was favorable but tinged with caution ― unsurprising, considering the history of false dawns for North Korean denuclearization. U.S. Secretary of State Hilary Clinton summed up the mood with her opinion that the deal was only “a modest first step in the right direction.”

Among the many unconvinced of the North’s sincerity is professor Kim Yong-soon of Yonsei University’s Institute of East & West Studies.

“The move by the North Koreans to accept the latest deal seems to be for two reasons: one is to buy time for the completion of their regime transfer, and two is for economic reasons,” Kim told The Korea Herald.

“Of course these two reasons are intertwined in that only some sort of economic stability will ensure a smooth transfer of power as well as its completion. Only time will tell, but as of now, there seem to be no indications as to suggest that this deal is any different (from previous promises to halt its nuclear activities).”
Song Dae-sung, president of Sejong Institute, a Seoul-based think tank, is blunter in his assessment of the regime’s intentions.

“North Korea’s latest concessions are not sincere. There is no chance that the North Koreans would ever surrender their nuclear development program... In the short run, they hope to win some aid from Washington in exchange for symbolic concessions and demonstrated willingness to negotiate the eventual denuclearization ― this willingness is fake, but it will help for a while,” he said.

Song says that this latest commitment to a moratorium while, in the North’s words, “productive dialogues continue” allows North Korea to have it both ways.

“In the long run, they hope to make a deal about arms restriction, as opposed to disarmament. In other words, they are willing to freeze their nuclear program, if they are paid a hefty fee, and explicitly or implicitly allowed to keep some stockpiles of plutonium and/or nuclear devices. Thus, they will kill two birds with one stone: They will reap the benefits of being a recipient of large aid while they will remain secure from the threat of a foreign invasion or foreign support of a local insurgency.”

The hope remains for policymakers that the North’s concessions could be the stepping stone to the eventual resumption of the six-party talks, which the North walked out of in 2009, shortly followed by its second nuclear weapons test.

Accordingly, Stephan Haggard, director of the Korea-Pacific Program at University of California and visiting fellow at Peterson Institute of International Economics, is more optimistic about the implementation of the latest deal.

“The deal is significant in two ways. Not only does it provide a path back toward the six-party talks; it also suggests that the new leadership is capable of taking fairly bold decisions. They have been trying to come back to the talks, but the U.S. has demanded some prior actions or ‘pre-steps’ before resuming the Six Party Talks. I would be surprised if they took this step and immediately reneged on it,” he said.

While an enormous challenge, Haggard doesn’t see it as inconceivable that the regime could be induced to give up its nuclear weapons entirely.

“The negotiations will not be easy, and the U.S. and ROK will need to address North Korean security concerns and probably provide some economic inducements as well, including some discussion of light water reactors,” said Haggard.

But nuclear armament has proven to be a powerful bargaining chip for the North, one which it is not likely to give up lightly. Last year’s demise of Libyan strongman Moammar Gadhafi, after his compliance with U.S. and U.K. demands to end his nuclear weapons program, must surely give the North Korean leadership pause for thought.

“There are two very compelling reasons why North Korean decision makers need nuclear weapons: First they do not want to be slaughtered with their families; second, they want to be able to squeeze aid from the outside world,” said Song, adding that dialogue could never lead to the North’s disarmament.

But, if not complete disarmament, there is threat minimization.

“While I remain doubtful that North Korea is ever likely to negotiate away its nuclear program in its entirety, there is something to be said for limiting or constraining North Korean nuclear capabilities,” said Marcus Noland, a senior fellow at the PIIE and co-author with Haggard of a number of books on North Korea. “The recent deal does precisely that, limiting nuclear activities at Yongbyon, and could act as a springboard to negotiations that could result in broader denuclearization measures.”

While Noland is reluctant to attribute the concessions to an unprecedented willingness on behalf of the new North Korean leadership to denuclearize, he nevertheless believes they represent a significant breakthrough.

“What I think that we can say is that the deal means that someone or some group in Pyongyang is capable of making decisions; and that the first decision they made had a conciliatory, and with respect to the volume of food aid, an even concessionary, cast. This development is good news, especially if the alternative would have been hunkering down and doing another nuclear test later this spring.”

Kim believes that in the short term there is little Seoul can do to get the North to disarm, but that long-term strategies should combine accommodation and a tough posture. While the carrot and stick must go hand-in-hand, he says, Seoul and the international community have tended to rely too much or one or the other.

“In the long term, the South has to work to alter the rigid threat perception that North Korea has ― that is seeing the South and its alliance with the U.S. as a real and immediate threat to its survival. Again, this is made more difficult given that the North regime has been using this perceived outside threat to justify its rigid rule over its populace.”

North Korea might seem sincere so far in its deals with the U.S., but I do not see a bright future for these negotiations. First off, North Korea has never been reliable. The history of negotiations with North Korea. tells us that the North has always stabbed us in the back, breaking the deal.

For example, the “Sunshine Policy” seemed to work out at first, but after getting all the help it needed, North Korea soon started working on its nuclear power plants. North Korea will dare to do this again even though it is dealing with the powerful U.S.

Some might claim that the North Korean government has changed and is walking toward negotiations and peace. It is true that Kim Jong-un spent time abroad, learning new cultures and living among them. However, he was educated to rule just like his father before the death of Kim Jong-il. This means that the only difference between Kim Jong-un and Kim Jong-il is the amount of fat tissue they possess.

Secondly, the North Korean government has persistent in threatening South Korea since the death of Kim Jong-il. North Korea has always found ways to threaten the South: South Korea didn’t pay condolences, the Key-Resolve is threatening, North Korea will do anything when it comes to war and so on.

Why will the U.S. be different? They have a great hostility toward the U.S. This deal will not make any difference to the abomination. It might even create pressure leading to something even worse, just like a stubborn child having a tantrum when someone offers them a hand.

From my point of view, helping North Korea will do no good. We should rather leave North Korea alone and let it collapse by itself. Then they will give up their nuke programs ― or they might even act more aggressively. If they do act aggressively, even though they are unstable and weak, that is when the Army marches in to end the government in Pyongyang and rebuild a new regime from the ashes.

White collar crime refers to crimes people commit by taking advantage of their authority or social status, such as bribery, tax evasion, price-fixing and corruption. In Korea, so many politicians and people of high social status commit these crimes.

Politicians often exchange bribes with each other to gain authority to live in wealth and honor. Numerous CEOs evade taxes although they were able to earn a lot of money thanks to their country and their consumers. It seems reasonable for those people who commit white collar crimes to be punished heavily. But in Korea, people who commit these crimes are punished lightly.

Several points can be analyzed as factors why white collar crimes are punished lightly in Korea. In regard to major firms here, it is because they actually control the Korean economy. Also, politicians of a high social status are punished lightly because they lobby and exchange bribes to ensure they help each other when they need it or when they need support for promotion.

There have been reports that if major firms such as Samsung, LG and Hyundai collapsed, the Korean economy would collapse as the result. From this, some might be relieved Korea is able to sustain its economy. On the other hand, the fundamental problem is that since large companies are major contributors to Korea’s economic development, they are taking advantage of their consumers by fixing their prices and evading taxes. Worse, the Korean government cannot punish them heavily because they are the impetus of Korea’s economic development.

Since the government does not punish large companies heavily, more of them will commit white collar crimes. To solve this problem, small and medium-sized businesses should be encouraged and supported. This will distribute economic and political power more evenly.

In Korea, the corruption of politicians or people of high social status is common, but heavy punishment for their crimes is not. More often than not, when Koreans turn on the television, they can watch news about politicians who exchange bribes and commit other white collar crimes. However, we hardly ever hear of politicians being punished heavily. Politicians who commit white collar crime are often acquitted or have prison terms suspended. When we look carefully at the upper classes, we notice that those people are lobbying each other and offering bribes for help in certain situations. Members of the National Assembly lobby to pass a bill or block the passage of one. Others bribe each other for help during elections.

This problem cannot be resolved easily since the social structure is the essential problem. On the other hand, if the Korean government strongly punishes politicians who commit white collar crimes, the problem can be gradually settled.

People commit white collar crimes mainly for wealth and honor. People are so eager to earn these things that they commit crimes, although they know they are immoral and unlawful. If people give up their greed for wealth and honor, society would become better and be different from the past. Our state of mind needs change first in order to eradicate white collar crime. 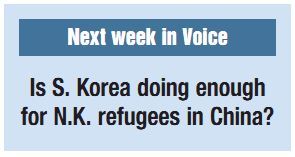