On Sunday, academic and entrepreneur Ahn Cheol-soo, who sided with the progressives in last year’s Seoul mayoral by-election, joined the candlelight vigil held outside the Chinese Embassy in Seoul. 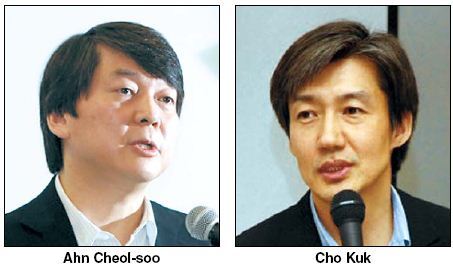 At the vigil, Ahn talked with Lee Ae-ran and expressed his support for her cause. Lee, a North Korean defector, has been staging a hunger strike at the location for 12 days. She runs a North Korean food institute and is the first woman defector to earn a doctorate degree in the South. Lee had sent an e-mail requesting that Ahn visit the demonstration and show his support.

“I have been interested for some time, and I was moved by the letter,” Ahn said during his visit.

“Protecting human rights and the socially disadvantaged are values that transcend ideology and the system.”

“The international human rights convention must be applied as the standard in solving the problem of North Korean defectors in China. (Defectors) must be protected according to the convention relating to the status of refugees,” Cho said.

While progressive academics appear to be shifting their stance on the matter, progressive politicians remain less vocal than their conservative counterparts.

Citing the possibility of aggravating ties with Pyongyang, progressive parties have either remained silent, as with the Unified Progressive Party, or have shown a lukewarm response.

On Feb. 21, after the news that 34 North Koreans were in detention in China broke, Rep. Park Sun-young of the conservative Liberty Forward Party began a hunger strike outside the Chinese Embassy in Seoul, calling for Beijing not to return them to the North. North Korean defectors, if returned from China, will likely receive harsh punishment, which could include public execution.

Her efforts have gained support from the conservative Saenuri Party.

“The issue of North Korean defectors is one that requires concerted national opinion regardless of party affiliation and ideological differences,” Shin said.

“China needs to be made to stop the forced repatriation of North Korean defectors and to adhere to the convention relating to the status of refugees.”