Looking back on Eva Hesse


Her life was short, but she was influential.

Late U.S. artist Eva Hesse is one of the most critically celebrated artists of the 20th century. Born into a Jewish family in Germany in 1936, she moved to the U.S. at age 9 but lost her parents soon after.

She studied painting at Yale University of Art and Architecture in New Haven and slowly became an acclaimed painter. After marriage, she briefly moved back to Germany, where she shifted her focus to sculptures until she died from a brain tumor in 1970.

Her work in both media has received great acclaim for their profound layers into which the artist portrayed herself. 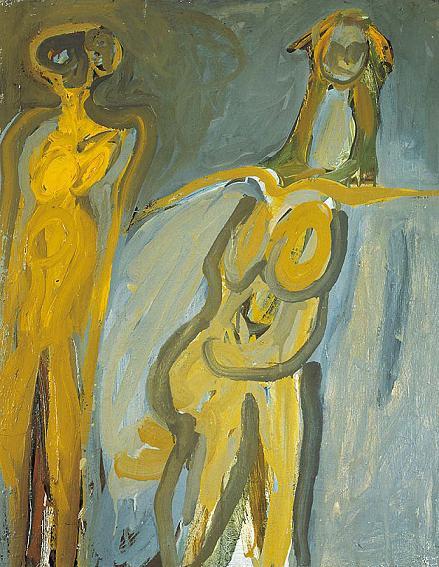 Kukje Gallery in Samcheong-dong, central Seoul, is shedding light on the artist for the first time since 2004. The exhibition “Eva Hesse: Spectres and Studiowork” showcases about 50 pieces of her paintings, installations, collages and sculptures.

The exhibits include 20 oil paintings which Hesse produced in 1960 and were never exhibited during her lifetime.

“Only painting can now see me through and I must see it through. It is totally interdependent with my entire being,” the late artist had said in 1960.

“The works reveal a vitally important part of her evolution as she moved away from abstraction to striking semi-figurative subjects that show her relentless exploration of the psychology of self,” said the curator of the show.
Other notable pieces are from the “studiowork” series which is consisted of a group of small sculptures made of unusual materials like latex, fiberglass, masking tape and wax. They are shown in Korea for the first time as well.

Most of her work is unsigned, not to mention untitled.

“It didn’t matter to her. Her sculptures have no titles, and many of her paintings have no titles either,” said Barry Rosen, director of the Estate of Eva Hesse.

The exhibition runs through April 7 at Kukje Gallery. For more information, call (02) 735-8449 or visit www.kukjegallery.com.