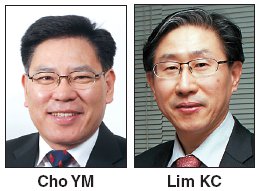 The 56-year-old Cho, who is currently a senior adviser for the ruling Saenuri Party, was picked for his rich experience in government and communication ability, the presidential office said.

Lee also named Lim Ki-chul, presidential secretary for science and technology, as permanent member of the National Science & Technology Commission. Lim, 56, served as vice chief of the Science and Technology Policy Institute for two stints from 2008-2010 and from 2002-2005.