Chairman Chung is to take on the role of a standing director in Hyundai Engineering & Construction, which was acquired by the automotive group in March 2011, Hyundai Motor said Wednesday.

According to Hyundai spokespeople, their direct involvement in the subsidiaries is aimed at enhancing responsible management.

“Construction is one of the three core sectors of our group, along with automobiles and steel,” a spokesman said. “Chairman Chung’s taking on the standing director’s role is designed to carry out responsible management.” 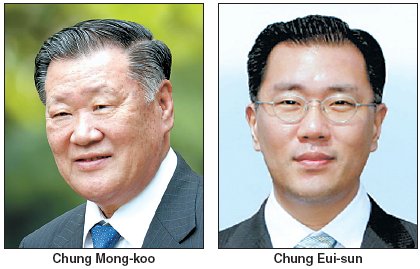 The Hyundai chief has already been in charge of the standing director in five more units ― Hyundai Motor, Hyundai Mobis, Hyundai-Steel, Hyundia Powertech and Hyundai ngv.

In particular, as the late Hyundai founder Chung Ju-yung had regarded Hyundai E&C as the parent group of Hyundai affiliates, the Hyundai Motor chairman is expected to pay keen attention to the builder’s performances.

Vice chairman Chung has been entitled to expand his management activities to the non-automotive unit by taking on the director post of Hyundai-Steel.

“This is the first time for the vice chairman to be appointed as a director in the non-automobile business sector,” a group spokesman said.

His future performance is drawing more interest as the steel producer posted a deficit in the net profit in the third quarter of 2011.

Furthermore, Hyundai-Steel has been projected to see its earnings fall compared to last year.

Chairman Chung has reiterated the necessity of enhancing internal stability amid the unfavorable global market conditions.

Chung was quoted by a Hyundai executive as saying that “Hyundai Motor and Kia Motors have posted great performances. The global automotive industry could be undermined. Hyundai and Kia cannot be an exception.”

The chairman said it was important for staff not to settle for present performances to cope with the uncertainties.

His remarks are in line with the group’s road map to catch up with European and Japanese carmakers by offering cars with advanced quality.

“Beyond the products which simply satisfy consumers, it is time for us to touch their heart by providing them with the best level-quality products,” he has continued to stress this year.

The group’s target of investment in sectors like the research and development for this year comes to 14.1 trillion won ($12.3 billion), up 15.6 percent from its 2011 investment.