A progressive political leader recently expressed embarrassment at the intensifying competition between the two major parties to shift to the left.

Rhyu Si-min, co-leader of the splinter United Progressive Party, said in a radio program that the ruling Saenuri Party as well as the main opposition Democratic United Party have tilted too much toward progressivism by putting forward welfare and labor policies they had been previously unenthusiastic about.

“We are left in a somewhat awkward position as the DUP and the Saenuri Party have been pushing too far in our (progressive) direction,” said Rhyu, who served as health and welfare minister in 2006-07 under the late liberal President Roh Moo-hyun.

He said his party now felt the need to differentiate itself from the major parties by renewing efforts to publicize its consistency and sincerity in coming up with measures to expand welfare benefits and improve working conditions.

Political observers note that many policy pledges the Saenuri and the DUP have recently churned out are copycats of the schemes drawn up by the Democratic Labor Party, which merged with other left-wing groups to launch the UPP last December.

The heated competition to win the voters’ hearts in the lead-up to the April parliamentary elections and the ensuing presidential vote in December, has blurred the line between the Saenuri and the DUP, which are assumed to represent the conservative and liberal parts of the country’s political spectrum, respectively.

Critics say the ruling party has been recklessly discarding its conservative values and policies to follow in the steps of the liberal opposition preoccupied with courting voters with populist pledges.

But officials tasked with overhauling the crumbling ruling party, which was renamed from the Grand National Party early this month, appear to have been little swayed by such criticism.

Former lawmaker Kim Jong-in, a member of the Saenuri’s interim emergency council, recently expressed discontent that the party had been lukewarm in working out reforms.

He said at a council meeting that some party leaders were not fully aware of the need for drastic reform, without which he said the scandal-hit party would be routed in the elections.

Kim stirred up controversy last month by suggesting the ruling party delete the word “conservatism” from its platform. He said the measure would help the party expand its support base “under the circumstance in which it has become meaningless to distinguish between conservatism and progressivism.”

Rep. Park Geun-hye, the interim head of the party, put a lid on the boiling controversy by stopping council members from discussing Kim’s suggestion.

The revised platform later drawn up by the council is designed to shift the party from its previous conservative stance on welfare, the economy and North Korea to liberal and ― from a viewpoint of some in the old guard ― populist approaches.

The preface of the new platform named “promises with the people” starts with a pledge to put the people’s happiness at the top of the party’s priority list.

Departing from an emphasis on market economy principles, it stipulates that the party will push for policies to implement an upgraded welfare model tailored to fit the life cycle of each individual, boost employment and strengthen the government’s role in ensuring fair competition.

“Our party will see enormous changes based on its new platform,” said Park, the leading presidential contender from the ruling party. 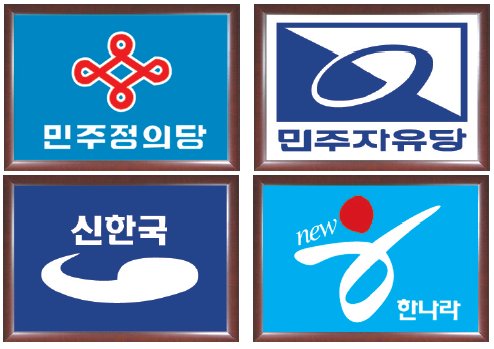 She said the pressing issue was not to distinguish between the right and the left but how to serve the people best. Her remarks were interpreted by many political observers as indicating that she would move her party further to the center and, if necessary, to the left in the run-up to the key elections.

Days after changing its name, the ruling party unveiled a new logo composed of a red symbol and black letters. The logo drew a negative response from some party members and supporters as it discarded the blue color which had been adopted in the emblems of all four conservative parties that preceded it.

Taking a step back, public relations officials at the party later changed the color of the letters to blue.

But the party decided to stick to its new name of Saenuri, which had also faced criticism that the Korean moniker, which roughly translates into “new world,” did not mirror its identity and values properly.

The ruling party’s bumpy but persistent efforts to shed its image as a conservative force come in line with a significant change in the country’s political landscape over the past years, analysts say.

“Conservatism may now be at the lowest ebb as major political parties appear to be competing to distance themselves as far away from conservative values as possible,” said Lew Seok-choon, professor of sociology at Yonsei University. 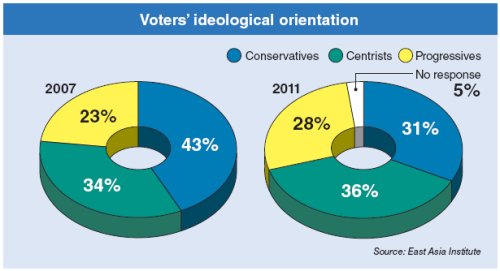 The left-leaning shift in voter sentiment is evident in a series of polls.

According to surveys by the East Asia Institute, a Seoul-based private think tank, the proportion of voters who regard themselves as conservatives fell from 43 percent in 2007 to 31 percent in 2011.

The share of voters who are tilted toward progressivism increased to 28 percent from 23 percent over the cited period. The presence in the center of the political spectrum remained little changed at around 35 percent.

Over the past decade, the political pendulum has swung from the left to the right and then back to the left, with economic crises in 1997 and 2008 strengthening the voices of liberal and progressive groups.

Until the mid-1990s, conservative forces had dominated domestic politics. Giving priority to economic growth and security against threats from North Korea, military-backed authoritarian governments had ruled the country for decades until 1993 when pro-democracy leader Kim Young-sam was sworn in as president. Kim walked the conservative line during his five-year term.

Elected to the presidency in 1997 amid the foreign exchange crisis, Kim Dae-jung, another leader in the democracy movement, launched the nation’s first liberal administration. The liberal rule continued through the presidency of Roh Moo-hyun, which ended in 2008.

On the back of mounting public discontent with Roh’s mishandling of economic affairs, GNP presidential candidate Lee Myung-bak brought power back to the conservative camp with campaign pledges to revitalize the economy and keep to the principle of reciprocity in dealing with North Korea.

While seeing his business-friendly policies deepen the polarization of society and do little to help their livelihoods in the wake of the 2008 global financial crisis, the people began to turn their backs on Lee and the way he has run the country.

According to surveys by Gallup Korea and the EAI, more than 60 percent of Koreans believed economic growth should be given top priority in 2004 but the proportion shrank to 39 percent last year. In contrast, the share of Koreans who place distribution of wealth ahead of growth jumped from 30 percent to 57 percent over the cited period.

No fault with conservatism itself

Political analysts say major political parties share the need to check the growing influence of chaebol, or family-owned conglomerates, and establish fair competition in the market, with the opposition taking more radical approaches.

Some experts note the ongoing downfall of conservatism does not necessarily mean it has become dysfunctional as a political value, but has been prompted by the moral failure of conservative forces and more immediately by the policies of the Lee administration, which has resulted in a wider gap between the rich and the poor.

They say conservatism has been increasingly overlapped with vested interests and privileges for the wealthy as conservative elites have stuck to their greediness, showing insensitivity to economic and social problems.

“The current troubles facing us should not be diagnosed as resulting from conservatism itself,” said professor Lew.

In the long term, he said, conservative values may emerge again in a stronger form as the people begin to find themselves having to shoulder the costs and ill effects of the populist pledges poured out by the political parties.

The Ministry of Strategy and Finance estimated Monday it will cost up to 340 trillion won ($302 billion), far above this year’s national budget of 325 trillion won, to implement the welfare proposals made by the parties over the next five years.

“It is certain that we cannot simply get on with these irresponsible pledges aimed at buying votes,” Lew said.

“Maybe in the latter half of the next administration, whether it is formed by the Saenuri or its progressive rivals, we will see the political weathercock pointing to conservatism again,” he said.