Planned changes to Google’s privacy policy are raising concerns about the safety of personal data around the world. Critics say that Korea, one of the world’s most wired countries, could be particularly vulnerable.

Google announced last month that it will start combining nearly all information on its users under a new privacy policy that will take effect March 1.

Information from some 60 Google services such as its flagship search engine, Gmail, and YouTube will be treated as a single trove of data, which the company could use for targeted advertising.

This could mean searching for something on Google and seeing ads for a product that you have just been chatting about with a friend via Gmail.

Or Google could provide reminders that you are late for an appointment based on your location and calendar from your Android phone.

The news, however, is prompting privacy concerns globally as it appears almost impossible to opt-out of Google services. 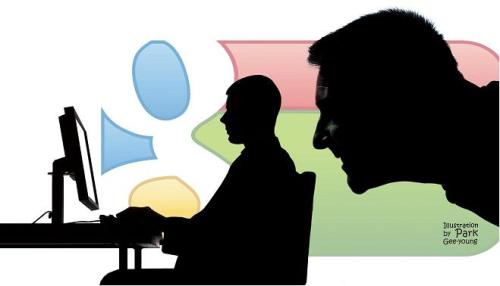 Google dominates more than 80 percent of the global search market, while nearly half the smartphones are running on its Android operating system.

“You can choose not to do Facebook but no one is free from Google products,” said Im Jong-in, professor at Graduate School of Information Security, Korea University.

Korea, in particular, is one of the most vulnerable countries in the world to potential hacking attacks, according to Im who is also serving as a member of the presidential Personal Information Protection Commission.

“Many Koreans are heavy data users thanks to the well-developed network infrastructure like the super-speed Long Term Evolution service. They would become a lucrative target for the commercial use of data,” he said.

Korean smartphone users have exceeded the 20 million mark over the past two years, with the number of LTE subscribers reaching 2 million this month.

“Google’s policy changes were made only from the American perspective. The policy’s Korean adoption should consider the unique Internet environment here,” he said.

In Korea, only public organizations are required to undergo a feasibility study on whether they can effectively handle hacking attacks. Like major local portals that participate in the test, Im suggested that Google join the voluntary move for better protection of user data.

Google reiterated that it remains committed to protecting consumer data as it creates a “seamless and easy” Web experience.

“The new change would make diverse privacy policies and terms of service shorter and more readable for users. Users still have choice and control over their private data,” a Google Korea spokeswoman said.

“We’re still allowing people to use Google products without signing into a Google account and people also can create several accounts.”

She declined, however, to comment on the possibility that the new policy could be adopted by countries in different ways.

The Korea Communications Commission has also begun looking into the case, focusing on whether the company has received approval from users for the planned data sharing and a minimum amount of personal information has been collected.

“Google’s announcement came without any advanced notice. If any illegal acts are found, we will respond according to domestic laws,” said Kim Kwang-soo, director of privacy protection and ethics division at KCC.

The state-run Internet watchdog plans to ask Google to cooperate with the investigation within this week.

On Monday, European regulators also urged the company to delay the introduction of the new policy so they can explore possible consequences. With the exception of its repeated explanations about its policy purpose, Google did not hint at its planned changes.

In the U.S., a bipartisan group of eight lawmakers also sent a letter to Google right after the new policy announcement made on Jan. 26 to express concern about data security.

“Some important things aren’t changing: We’re still keeping your private information private ― we’re not changing the visibility of any information you have stored with Google,” said Pablo Chavez, Google’s director of public policy, on the company’s public policy blog.

He added that Google will continue to offer “privacy tools” including an ad preference manager, and “We still won’t sell your personal information to advertisers.”