Fake social network accounts in dispute ahead of elections


Korea’s politicians are desperately scrambling to boost their influence on social networks ahead of the parliamentary elections. How desperately? Some allegedly buy new Twitter accounts with more followers, a practice that is muddying their already tainted reputations.

Although there are no official numbers of how many fake Twitter, Facebook and other social network accounts are traded in return for money, the new policies adopted by the country’s major parties suggest that such illegitimate practices are rampant among politicians who want to be nominated as parliamentary candidates in the upcoming general elections slated for April 11.

On Jan. 25, the ruling Grand National Party announced it would penalize parliamentary candidates if it found they traded in Twitter accounts or artificially enhanced their SNS profiles, a move that demonstrates the heightened status of social networks in electioneering and at the same time its negative potential in connection with fake IDs.

“If any irregularities are found in social network accounts, candidates will be severely punished in the nomination process, but we do not believe this kind of side effect would hamper the party’s new policy that embraces social network media,” GNP spokesperson Hwang Young-cheul told The Korea Herald.

The proactive measure against fake Twitter IDs and account trading came as social media’s influence continues to grow bigger and bigger in politics. A striking example came in the Oct. 26 Seoul mayoral race, as civic activist Park Won-soon overcame his handicap as an independent candidate and beat the GNP’s Na Kyung-won on the strength of his solid support base he had forged through his popular Twitter account. 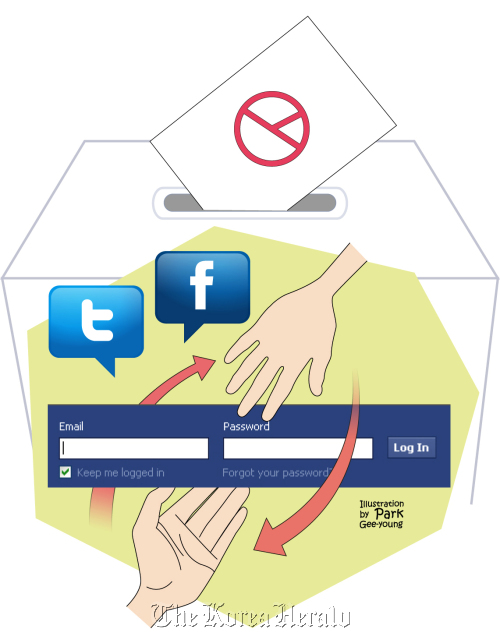 The voters’ demographics are also changing in favor of such new media that thrives on smartphones such as Apple’s iPhone and Samsung’s Galaxy S series, as well as tablet computers. According to the National Election Commission, some 15 million eligible voters ― out of 40 million voters in total ― are in their 20s and 30s, who happen to rely heavily on Twitter, Facebook and Kakao Talk, a free smartphone messenger, to communicate with friends and read news items on the go.

As for the controversy over the trade of social network accounts, policymakers at major parties said that reflecting SNS influence is designed for better communications with voters. The GNP earlier said it would incorporate social network service index scores to the candidate nomination process for election campaigns.

“Incorporating the SNS index into the nomination process will improve communication with the public,” said Lee Jun-seok, a member of the GNP’s emerging leadership council. “While a Twitter account can be measured through the number of followers, measuring the candidate’s influence on Facebook and the news media is yet to be refined further due to their ambiguous standards.”

Moon Yong-sik, chairman of the Internet communication committee for the Democratic United Party, said that social network media is the trend that cannot be neglected in elections.

“Drawing up a systematic social media strategy is important for the party, but it is individual candidates who should make their own efforts in earnest while the party offers only social network training and supportive measures,” Moon said.

But blocking politicians from abusing the social networks is easier said than done. Especially since U.S.-based Twitter does not require users to submit their real names or IDs. Instead, one can set up a new Twitter ID with an e-mail account instantly, and then become a new personality by uploading a stranger’s picture as a profile photo.

Unlike Korea where real-name authentication is required for the majority of online services, foreign social network services do not call for such private information to sign up. As social network activities are increasingly used as reference information for getting a job or even securing an admission to a top-ranked college, a growing number of users are opting for tricks such as double IDs for Facebook and Twitter, one for a personal use that includes negative comments and potentially compromising photos and the other for an official use that features only positive and friendly comments aimed at making a better impression at job interviews.

“Some students in the U.S. set up another ‘clean’ Facebook account that they plan to submit to colleges or companies in the future,” said an expert in Seoul, who specializes in PR strategy based on social network service. “People should be aware of the potential abuse of social media services which do not require real names.”

Psychologists released new studies showing that Facebook and other social network services cause stress for users, including fear of missing important social information and fear of offending contacts. As the Constitutional Court produced a ruling in December that allows online election campaigns on the social network services, Korean politicians are now required to deal with more stress in addition to psychological pressure: increase their Twitter followers or Facebook friends as quickly as possible in order to survive in the elections.