The following is the first of a series of articles on school violence brought into public spotlight following the recent student suicides caused by bullying. ― Ed.


New forms of school bullying are emerging as technology develops and society becomes more prosperous. Alerted by shocking school bullying that has driven victims to suicide, the government is updating its view of school violence.

Last December, a 13-year-old middle school student was robbed of his $400 down jacket on a cold day by his school seniors, according to police in the southern city of Busan. A group of high school students in Incheon were booked without detention last Friday for threatening to steal their classmate’s $700 jacket.

Winter jackets made by North Face, an outdoor product company, have caught on among secondary school students in Korea, with many seen wearing them.

“One of my students’ North Face jacket was stolen when he wasn’t in the classroom. I tried to make whoever did it confess, but no one came forward,” said a middle school teacher in Gyeonggi Province, asking for anonymity.

Another new form of school violence is cyber bullying, especially the use of mobile devices and applications, which enable bullies to harass their victims 24 hours a day. 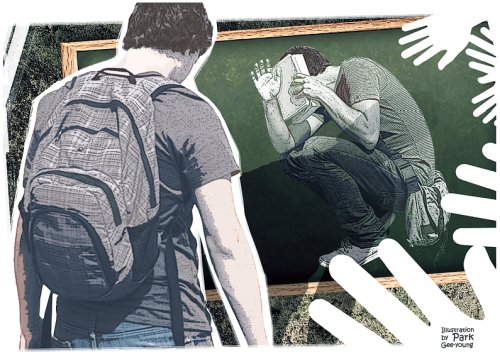 In recent cases, bullies forced their classmates to subscribe to expensive unlimited access rates and make them share access. They also took humiliating pictures of their victims and distributed them to other students via mobile messengers.

Also, online games have played a part in recent school violence suicides. Some of the latest victims were forced to play online games by bullies who wanted to get extra points in the virtual world.

“Students involved in school bullying are becoming younger, and most of them are from wealthy families with affluent parents,” Woo Ji-hyang, a counselor at Seoul Culture High School, told The Korea Herald.

Two or three years ago, bullies and victims began to come from these wealthy families, with one or both parents working white-collar jobs, she said, adding that poverty is not the main motive of bullying. A major problem of an economically developed society, she said, was a sense of alienation or isolation.

Parents of a middle school boy who killed himself after being harassed by school bullies in the southeastern city of Daegu last month are teachers.

“Parents and children rarely talk even when they are at home together, they are just busy doing their own stuff with their own laptops,” Woo said in a recent lecture to the Education Ministry on school violence.

As students begin to be bullied at a younger age, as young as elementary school these days, psychological damage inflicted on victims is becoming more severe.

According to her, cases of Asperger’s Syndrome, an autistic disorder characterized by social awkwardness and restricted, repetitive behavior and interests, are increasing, and many of these students fall victim to harassment. Some turn into killers, as in the case of Cho Seung-hui, a student at Virginia Tech in the U.S., who killed dozens of students and himself in a shooting spree in 2007.

She said that she once treated a boy with the syndrome who had been socially isolated and paranoid. He could not make eye contact, talking as if he reads a book.

“He was very intelligent as he reads many difficult books of more than a thousand pages. I read all the books he read to be able to communicate with him,” said Woo.

An anonymous teacher said that she sometimes spots school violence, but she feels helpless.

“We can’t pay attention to every student in classroom, not to mention after-school hours.’