Korea has become the 10th-largest acquirer in the cross-border mergers and acquisitions markets, overtaking Germany and France.

According to data of the Korea Capital Market Institute, Korean companies’ takeover of foreign players in the M&A markets was equivalent to $11.2 billion (12.7 trillion won) in combined asset value for the first 10 months of 2011. 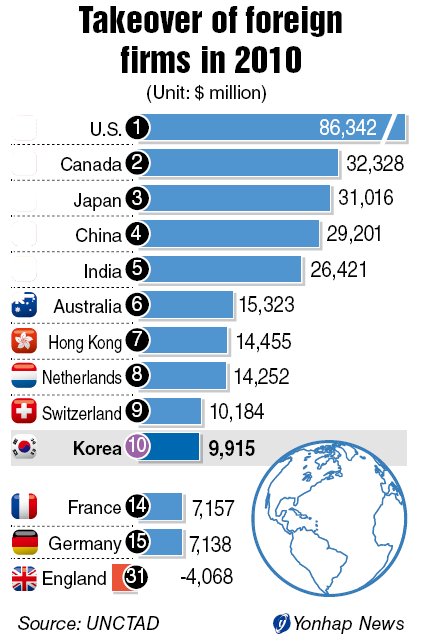 Korea ranked 10th in the value of takeover prices and seventh among members of the Group of 20.

Undermined by persistent eurozone turmoil, many U.S and European companies were put up for sale, prompting companies from South Korea and other emerging economies to gobble them up, the institute said.

France and Germany, however, trailed behind their Asian peers. France spent $7.2 billion on foreign M&As in 2010, down from $41.6 billion won, while the figure for Germany tumbled to $7.1 billion from $24.4 billion, the data showed.

The Thai unit, POSCO Thainox Pcl, has an annual production capacity of 180,000 tons, but is seeking to expand its output capacity to 300,000 tons in an attempt to meet stainless steel consumption growth.

POSCO has been pursuing acquisitions at home and abroad to boost revenue and to catch up with foreign rivals.

Over the past year, POSCO has taken over Asia Stainless Corp. in Vietnam and Taihan ST Corp. in Korea.

In 2010, POSCO also bought a 68 percent stake in Daewoo International Corp., a Korean trading firm, for 3.37 trillion won to expand its sales network and secure steady supply of raw materials.

In July 2011, a consortium of Fila Korea and Mirae Asset Private Equity Fund signed a contract in May with U.S.-based Fortune Brands Inc. to buy a 100 percent stake in its affiliate Acushnet Company for $1.23 billion.

In 2010, the Korea National Oil Corp. that it has succeeded in taking over British oil and gas explorer Dana Petroleum.

Hit by the global economic slowdown since the 2008 financial crisis, many technologically competent companies have been up for sale.

Researchers advise that through M&As, Korean companies can secure essential technologies that would take time to develop and use the acquired companies as a springboard to jump into new markets.

Cash-rich companies or wealth funds from China, Japan and the Middle East have already bought many overseas businesses that have liquidity shortages or other problems at relatively cheap prices.