[VOICE] Is reunification closer to reality?


As soon as North Korean leader Kim Jong-il’s death was announced, speculation began on the implications for South Korea’s relationship with Pyongyang.

A major question is how Kim’s death and the transition of power to his youngest son Kim Jong-un will affect the long-held goal of Korean reunification. With the elder Kim gone, is a reunified Korean Peninsula closer to becoming a reality?

According to North Korea scholar and Kookmin University professor Andrei Lankov, the answer is yes.

“It makes reunification more likely exactly because it makes instability in North Korea more likely,” he told the Korea Herald.

He sees reunification as early as next year as “not highly probable but possible,” pointing to the tendency of totalitarian regimes to collapse with little or no prior warning. Reunification is “probable” in decades at the earliest, however, as the regime as “little alternative” but to retain a stranglehold over the country.

“If they want to stay in control, if they don’t want to be slaughtered or run to China for exile ― (assuming) the Chinese will accept them, which is a big ‘if’ ― they have no choice but to continue these policies they have continued for the last few decades, which means no Chinese-style reform, no democratization,” he said.

Lankov is adamant that a collapse of the Kim regime is the only way that reunification can come about, as it would be impossible for the North Korean leadership to survive an orderly transition.

East Asian Economy and Society professor at University of Vienna Rudiger Frank agrees that Kim’s death makes reunification more likely in the short-term. But he considers the key window for an open power struggle and a regime collapse to have passed.

“By stating that he is leader of the party, the state and the army, the propaganda tries to make sure really that everyone in the population thinks that Kim Jong-un is the boss which means the chances for an open power struggle are really diminishing,” Frank said. “But now that he has been announced I think he really must be in the front, either as a figurehead or the real leader.”

Others such as professor Kim Jang-ho of Yonsei University’s Graduate School of International Studies believe that Kim’s death makes reunification neither more nor less likely, but means more of the same.

“Not much change I don’t think. Because he is young and because he has to rely on his father’s people for the time being to maintain his power, I think he will be very conservative in his approach to South Korea,” he said.

Kim says that a key question is how the new leader will deal with potential rivals within the regime.

“After Kim Il-sung passed away, Kim Jong-il relied on his father’s people for about five, six, seven years and then started purging them. I am not sure that will be the same for Kim Jong-in given his age, but until that time I don’t think he will be able to come up with any drastic changes. In terms of reunification, again, I’ll have to say, the status quo.”

Kim Jong-il in power or not, adherence to past policy is what ultimately counts, according to Song Dae-sung, president of Seoul-based national security think thank Sejong Institute. 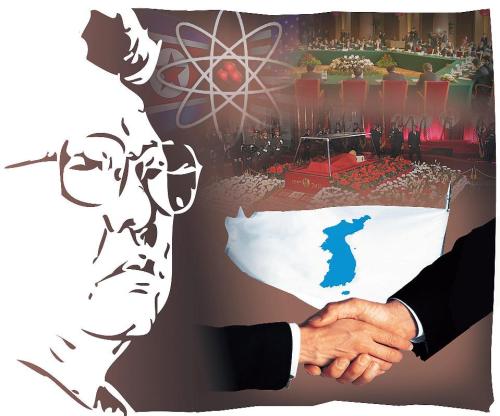 In a statement to The Korea Herald, the Unification Ministry said that while Kim’s death was “significant,” it would not be the decisive factor in brining about reunification.

“The government is pursuing reunification through efforts to improve North-South Korean relations and achieve peace on the Korean Peninsula. We have pursued this for the past 20 years and will continue to do so … The important thing is how North Korea responds to the efforts of the South Korean government,” said Kim Nam-sik, Assistant Minister at the Unification Policy Office.

But if a regime collapse does not happen, are there other paths to reunification? Frank believes so, but that they are fraught with difficulty.

“In you think about more smooth and gradual types of reunification, ones that are, at least officially, preferred in South Korea, it is hard to imagine how this is going to work. Reunification means shedding part of your national sovereignty, for both parts in an ideal world,” he said.

“And my impression is of course in South Korea the plan is that North Korea gives up everything and the South just keeps doing what it has always been doing and expands into North Korean territory.”

Frank says an ideal and plausible scenario would see North Korea follow a gradual liberalization, allowing it to expand its economy and increase its interaction with the outside world.

“But that means they grow stronger and that means they come into a position when they can ask for conditions when it comes to negotiation about the reunification. Will South Korea accept that? I have my doubts. So, in fact, it is kind of ironic, if North Korea manages to reform and open itself, this will make reunification, at least in the mid-term, unlikely.”

Frank, who grew up in former East Germany, also believes that Kim Jong-un may have less invested in a reunified Korea than his father and grandfather.

“I was 21 years old when Germany got unified and, frankly, I couldn’t care less about it. Why? Because through all of my life I had known two separate German states. So if you ask me whether Kim Jong-un would be as keen on reunification as his father or grandfather, the answer is no, simply because the divided Korea is the world he has known since the very beginning of his life.”

But despite it being official policy here to aim for eventual reunification, many South Koreans, particularly younger ones, remain skeptical of whether the benefits would outweigh the costs. South Korea’s economy is up to 40 times the size of the North’s, and that gap is likely to grow for the foreseeable future.

“At least 10-15 years of struggle is foreseeable after the unification,” according to Kim Yong-soon, a professor at Yonsei University’s Institute of East and West Studies. “As was the case with Germany, even if the unification process goes well, there will be severe political, economic and societal problems to overcome. Needless to say, this will not only test the leadership in Seoul as well as its people, but burden South Korea with a massive bill.”

Sejong Institute’s Song foresees an even longer period of about 20 years before reunification ceases to be a burden on Seoul.

But, despite the vast discrepancy in the two economies, Frank argues that Korean reunification could be a net benefit quicker than it was for Germany.

“Among the tangible benefits are gold, anthracite and magnetite and all the other nice stuff that is up there in the mountains in North Korea that South Korea is lacking and that the Chinese are actually taking out the country at this moment,” he said.

Frank also points to the differences in expectations between North Koreans and East Germans.

“It (East Germany) was an enormously rich country, people had cars, they had houses. Satisfying an East German after reunification meant a huge effort. Most money in the case of German reunification has been spent on social security.”

Unlike Frank, who says appeals to pan-Korean nationalism and economic benefit could allay skepticism here, Lankov says little can be done to persuade reluctant South Koreans of the benefits of reunification.

“You are basically asking how you can persuade people that it’s a good idea to sacrifice their life for the likely prosperity and happiness of the next generation. It can be done but people are not very eager to make such sacrifice.”

For Song, the best hope for changing reluctant attitudes here is for North Korea itself to grow economically.

“It is true that many Korean don’t want reunification soon. However, this view might change if the present quality of the North Korean regime transfers into a normal state.”