Biggest New Year’s resolution: to make it last a year


Though only a week of 2012 has passed so far, 27-year-old office worker Kim Jun-young has given up on some of his New Year’s resolutions already.

“My New Year’s resolution was to return home earlier and spend my evenings working out, but it ended up in smoke because of all the New Year parties. With more events coming up, including the Lunar New Year holidays, I am thinking maybe I should just postpone the plan until next year,” he said.

Is Kim the only one who has already started to back out on ambitious plans?

Now with the New Year parties over and life back to normal, maybe it is time to set effective, down-to-earth resolutions and for once, really get them done with.
With the shock of the KOSPI’s collapse last year still lingering, “money” seems to mean more than ever for many. 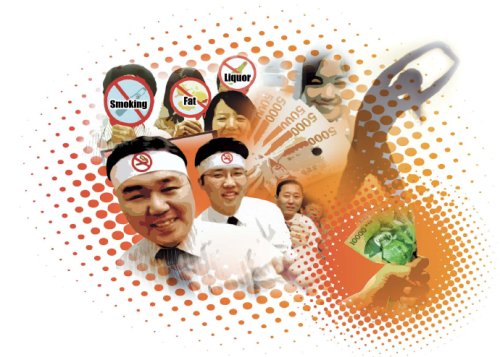 “I invested in a fund for the first time in my life last year but only lost a fortune when KOSPI dropped in August. My biggest goal for this year is to retrieve what I lost and hopefully gain more,” said a middle school teacher named Kim who declined to give her full name.

Kim is not alone, as 62 percent of the respondents of the Job Korea survey answered that their New Year’s resolutions have to do with savings, economizing and succeeding in financial investments.

Goals related to self-development like learning new things (45.7 percent) came next, followed by those concerning love life like starting a relationship, getting married or having a baby (35.2 percent), career goals like getting a promotion, shifting jobs or opening a business (32 percent), goals to enjoy life like going on trips and starting a new hobby (28.7 percent) and health goals like quitting smoking or drinking (11.7 percent).

Meanwhile another survey conducted by FC Organizational Products, the maker of the Franklin Planner, revealed an interesting fact that popular New Year’s resolutions change through time.

Quitting smoking and continuing education were included in the top ten New Year’s resolutions in 2002, according to the company’s survey but were off the list of resolutions for 2012. Instead, new resolutions like reading more and doing volunteer work were added.

“Resolutions reflect the times. People don’t want to pay a lot and they want to do more good,” said Sarah Devoll, the company’s chief executive officer in an interview with Bloomberg.

Resolutions such as “losing weight,” “becoming more physically fit” or “improving financial conditions,” however, were steadily found among the popular 10.

The resolutions sound perfect. But then why do so many realize, often in less than a month, that they are easier said than done?

What distinguishes goal-achievers from failures are the details of the plan, said Lee Seong-min, an expert on time-management and a researcher at the Korea Performance Improvement Center.

“Goal-achievers think hard, decide how much time and money they will spend to achieve it, and listen to those who have already achieved the same goal. Failures, on the other hand, set goals only based on momentary spurs. So they naturally fail, when the feeling fades away after a few days,” said Lee.

“To be more specific, two big things take about 70 percent of the reasons people fail to achieve their resolutions ― the changelessness of their everyday life and the lack of will to get rid of bad habits.”

Not surprisingly, 41.6 percent of 219 employees at 22 SK Group affiliates said last month in a survey that their weak will was the biggest obstacle in achieving their goals; 25.6 percent said they were too busy to care; 13.2 percent answered that they did not have strong motivation; and 10.1 percent said they failed to get rid of old habits.

Among the respondents, 25.1 percent found it most difficult to carry on the goal to learn a foreign language consistently; 20 percent picked out losing weight and getting fit as the hardest; 17.8 percent said improving financial conditions through stocks and savings; and 10.1 percent felt the hardest was managing their love life, marriage and having babies.

How to achieve them

Confronting reality, some simply surrender and say that New Year’s resolutions are good for nothing and are obstacles against even carrying on a satisfying life. Lee, however, asserted that without a goal there is no growth.

“One may have such an attitude after experiencing many failures. But it could bring further problems in attitudes towards life. Rather than stopping after a failure, one should find out why they failed and what more they should work on. Getting professional help is a good idea,” said Lee.

Industries are also rolling out interesting products that can help achieve goals, like Shinhan Bank’s monthly installment savings titled “mission plus” which provides an extra 0.7 percent interest rate at maximum when the depositor achieves their New Year’s resolutions.

At online shopping malls, one can find whimsical products designed to help achieve resolutions such as a “Kitty Bank” in which a kitten pops up to snatch coins every time the user places it on top, urging curious owners to save more.
“Diet Piggy,” a pig-shaped alarm which is supposed to help the users lose weight, is also popular. It is supposed to be kept in the refrigerator, and because it reacts to light, the pig snorts every time one opens the refrigerator door. “Dumbbell alarm clock” wakes you up and also helps you stay fit as it only goes off only after the user lifts up the 800g dumbbell 30 times.

Then what about goals that do not rely entirely on one’s own will, like getting married or a promotion or some other seemingly impossible dream?

Lee gave a similar answer as Park Jin-young, CEO of JYP, who recently said in an interview that he will never be disappointed even if the Wonder Girls fail in the U.S. market because he “earned wisdom worth several hundreds of thousands of won challenging the world’s greatest market during the past few years.”

“There is nothing wrong to setting a seemingly unreachable goal. Setting a goal is most important because you learn something about yourself from it; what you are good at and what you need more practice on. That is what is more important than actually achieving or failing a goal,” he said.