South in discord over North in transition


For Kim Oh-bok, the mother of a marine killed in North Korea’s shelling of a border island last year, Kim Jong-il’s death was the answer to her prayers to God. Since losing her son, she had prayed that the North Korean dictator would die as soon as possible.

On Dec. 19 when Pyongyang belatedly announced the death of its leader, the 51-year-old posted a note on her son’s mini-homepage in a symbolic move to let him know of the news.

“I believe you must feel so happy in heaven,” she wrote.

Two days later, she posted another note, this time expressing anger at those paying respects to Kim Jong-il, whose oppressive rule of North Korea lasted for nearly two decades until he died of a heart attack on Dec. 17.

“Those who had not offered even a word of condolence at the time of Yeonpyeongdo (being attacked) now say it is right to mourn the death of Kim Jong-il. How can they do so?” she said.

She was referring to some liberal politicians and members of left-wing civic groups who were quick to express condolences at the death of Kim, and urged the government to send a mourning delegation to Pyongyang.

Her anger was certainly shared by bereaved family members of the 49 other South Koreans killed last year in the bombardment of Yeonpyeong Island and the sinking of a naval vessel, for which the South has also blamed the North.

The bitter memory of North Korea’s provocations had hardly left South Korean officials’ minds when they worked out an official response, which seemed to walk a fine line between keeping its principled position intact and seeking a breakthrough in strained inter-Korean ties.

In a statement issued a day after Pyongyang’s announcement, Seoul expressed sympathy for the North Korean people without making any direct reference to the deceased leader. It also decided not to send a government delegation to his funeral set for today but allowed the widows of former President Kim Dae-jung and former Hyundai Group chairman Chung Mong-hun to visit Pyongyang to pay their respects to him.

The South Korean government also gave permission to private organizations and individuals to send condolences via mail or fax.

Such measures were more flexible and conciliatory compared to the way Seoul handled the death of Kim Jong-il’s father and founder of the North Korean regime, Kim Il-sung, in 1994. At the time, it banned all expressing of condolences, drawing the ire of Pyongyang.

“North Korea would not have imagined that (we) would go to this length,” said Lee, adding there is room to be “as much flexible as possible” in the relationship with the North.
But it took no more than a day before his expectations proved nave. North Korea on Friday denounced the Lee government for its restriction on civilian condolence delegations other than former first lady Lee Hee-ho and Hyundai Group chairwoman Hyun Jeong-eun. It called the ban “unacceptable, inhumane and barbaric.”

On its propaganda website “Uriminjokkiri,” Pyongyang said it would accept all South Korean delegations to mourn the death of its leader.

Analysts here interpreted the move as aiming to fan internal conflict in the South and “tame” the government in Seoul.

Some pro-North activists and students have stepped over the line drawn by the government by attempting to set up memorial altars in Seoul or sending a delegate to Pyongyang to pay formal tribute to the deceased North Korean leader.

A group of ex-offenders of the anti-communist National Security Law were blocked by police from establishing an altar near City Hall on Monday.

At Seoul National University, school staff removed an altar set up by students on campus.

A pro-North group said its representative, Hwang Hye-ro, flew into Pyongyang over the weekend to pay her respects to Kim Jong-il. Hwang, a France-based researcher, embarked on the trip Saturday after Pyongyang’s announcement that it would accept all condolence delegations from South Korea, the group told a press briefing in Seoul.

The prosecution and police have pledged stern measures against such moves which they say are in violation of the security law banning praise of the North Korean regime and unauthorized trips to the North.

Despite some cases of defying the government’s stance, experts here note public sentiment in the South seems relatively flexible and accommodating on the condolence issue, compared to the flare-up of internal conflict at the time of the death of Kim Jong-il’s father in 1994.

They say it is probably due to South Koreans’ increased exposure to what is going on in the North and confidence in the superiority of their democratic system over the failing totalitarian regime in Pyongyang.

Recent polls show most South Koreans regard North Korea’s hereditary power succession over three generations as absurd but still a majority of them support economic assistance to the impoverished neighbor and cautious handling of its leader’s death.

In a survey of 532 adults, released by Korea Gallup last Thursday, more than 80 percent said the transfer of power to Kim Jong-un, the youngest son of Kim Jong-il, should not have happened. Slightly less than half said it was adequate for the government to express sympathy for the North Korean people, with 29.9 percent wanting it to send a mourning delegation and 17.2 percent displeased with any kind of condolence measures.
A separate survey of 1,000 people, conducted by the Asan Institute for Policy Studies early last week, showed over 55 percent supported economic aid to the North, with about 40 percent opposed to it.

Half of them wanted to see the government ease its stance toward North Korea, with 22.1 percent hoping the current policy will be maintained and 19 percent wishing to put more pressure on the communist regime.

“At the moment, the public sentiment seems tilted toward the need to adapt to the post-Kim Jong-il period in a more flexible way,” said Woo Jung-yeop, research fellow at the Asan institute.

Many experts note it is needed more than ever for South Korea to minimize internal dispute over how to handle North Korea and carry out a concerted and unified policy toward North Korea to cope with the volatile situation and pave the way for the eventual unification of the peninsula divided since 1945.

“Inter-Korean issues have been politicized in the past, making it difficult to carry forward a consistent plan on the North,” said Woo.

“This grave circumstance leaves little room for a political approach to dealing with the North and calls for a serious debate over the future destiny of our nation.”

Concerns have lingered, however, over the possibility of Seoul’s posture becoming vulnerable over the coming year, with Lee drifting deeper into lame-duck status amid intensifying partisan wrangling in the run-up to the parliamentary and presidential elections set for April and December, respectively.

The administration of Lee, which has slightly over a year before his five-year term expires in February 2013, already caused public anxiety over its ability to cope with emergencies in North Korea by failing to notice any signs of Kim Jong-il’s death until Pyongyang’s announcement.

Seoul officials were caught off-guard when a teary-eyed North Korean telecaster in a black dress appeared on TV at noon on Dec. 19 to announce its leader died two days earlier.

Lee’s aides held a surprise party for his 71st birthday on that morning and an ensuing meeting of senior presidential secretaries presided over by Lee did not deal with North Korea’s situation. At the time of Pyongyang’s pre-announced broadcast, Defense Minister Kim Kwan-jin was meeting lawmakers at the National Assembly and the chairman of the Joint Chiefs of Staff, Jung Seung-jo, was inspecting a frontline military unit.

Rep. Kwon Young-se of the ruling Grand National Party, who chairs the parliamentary committee on intelligence, asked a senior official from the National Intelligence Service shortly before the broadcast what it would be about and was told “nothing to do with Kim Jong-il’s death.”

The lack of intelligence led Lee to be absent from his office during the two critical days following Kim’s death on a visit to Japan, which focused on pressing Japan to be more sincere in settling the issue of the “comfort women,” who were forced into wartime sexual slavery for Japanese soldiers.

Seoul officials said no other major countries including China seemed to have had any idea of Kim’s death until Pyongyang’s announcement but critics note South Korea, which confronts North Korea along the world’s most heavily-fortified border, should have seen clues of the grave situation.

“What if the missing information was in regard to North Korea’s surprise attack on us,” said a ruling party lawmaker speaking on anonymity. “The mishap has made the public raise a question on what the top intelligence agency exists for.” Lee has rejected the demand he sack NIS chief Won Se-hoon, his close aide from the days he served as Seoul mayor in the early 2000s.

Some political observers see the possibility of Lee’s grip on state affairs being further weakened by a string of corruption scandals involving his relatives and associates, some of whom have already been jailed.

Experts are concerned the election battles between rival political forces will further complicate South Korea’s handling of inter-Korean matters, tempting Pyongyang to attempt to affect the results of the two key polls which will determine the political landscape in the South for the coming years.

The ruling party may be hoping the volatile situation surrounding the Korean Peninsula will rally support from conservative voters while the liberal opposition may attempt to use public angst over inter-Korean ties strained under Lee’s rule to its advantage.

Experts note Seoul’s discordant posture could be especially dangerous if the North Korean situation becomes unstable. Running counter to some skepticism, the transfer of power to Kim Jong-un seems to be proceeding at a quick and smooth pace as planned by his late father.

When the North Korean anointed heir in his late 20s completes the process of power succession, Woo of the Asan institute said, he will face two courses of action.

Guided by a group of senior mentors represented by his uncle Jang Song-thaek, the junior Kim is more likely to improve relations with the U.S. and South Korea to attract economic aid needed to feed his people and rebuild the economy of the North, whose size is just one-fortieth of that of South Korea’s.

But if he feels the need to demonstrate his military prowess to solidify his power, he may resort to a provocative act, which would be the worst scenario for the South and other powers surrounding the peninsula, Woo said. 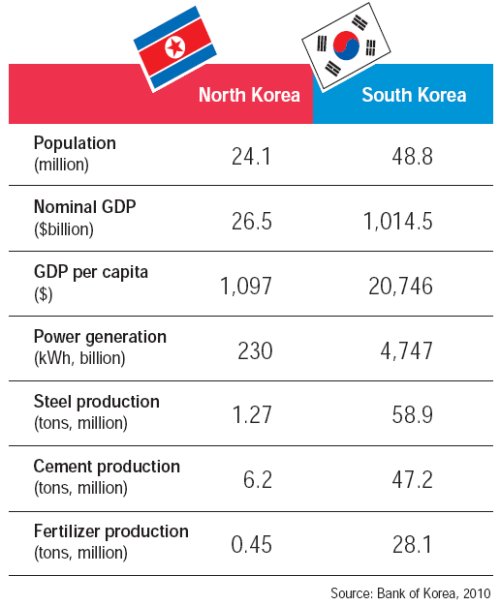