After spending more than two decades as a homemaker, 48-year-old housewife Kim, who has a master’s degree in education, hopes to get a teaching or welfare consultant job after her son enters college next year.

Her husband, a doctor, also encourages her to find new meaning in her life.

Their daughter, who studies hospitality management at a university in Seoul, is determined to pursue career success, placing marriage at the bottom of her priority list.

“My daughter says I should have been more challenging rather than devoting my post-marriage life to domestic work,” said Kim. “Now I think I am ready to be so.”

Korea is likely to have to boost its low-level female employment as its potential labor force will begin to shrink in the not too distant future.

Though the number of women engaged in economic activity has continued to increase over the past years, the female employment rate remains low compared to other developed nations.

According to figures from Statistics Korea, about 10.25 million women were engaged in economic activity last year, accounting for 49.4 percent of the female population aged 15-64, up 0.2 percent from the previous year.

The ratio of economically active women, which stood at 47.1 percent in 1998 when the country was hit by a foreign exchange crisis, increased to 49.3 percent in 2001, 49.9 percent in 2004 and 50.3 percent in 2006 before sliding down again in 2008 amid the global economic recession. The figures were far lower than those for men, which have hovered above 70 percent over the past years.

Based on calculations by the Organization for Economic Cooperation and Development, the ratio of Korean women engaged in economic activity was 53.9 percent in 2009, compared to the OECD average of 61.5 percent. The corresponding figures for Japan and the U.S. reached 62.9 percent and 69 percent, respectively.

Labor experts note the country will face an increasingly urgent task of boosting female employment as its workforce is projected to begin shrinking in five years.

A recent report by the national statistics office predicted that the number of Koreans aged 15-64, which stood at 35.98 million, or about 73 percent of the entire population, last year, will peak at 37.04 million in 2016 before being reduced by more than 10 million to 25.34 million by 2050. Working-age people are forecast to account for less than half (49.7 percent) of the population in 2060, by which time their number is estimated to further decrease to 21.87 million. This means that every 10 working-age people will have to support the same number of elderly persons and children ― eight aged persons and two children ― statistics officials say. 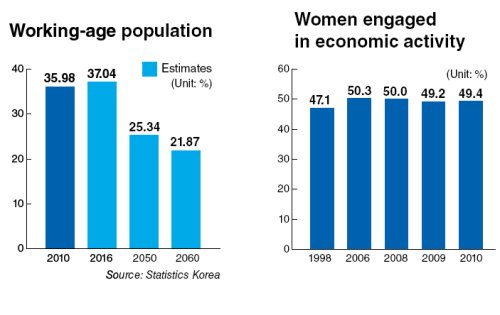 A study by the Samsung Economic Research Institute estimated that increasing the ratio of economically active women in the country to the OECD average will lead to a 14 percent rise in its per capita gross national income, which is expected to reach $24,000 this year.

This would aid a national pension system facing decline as the population is rapidly aging, experts note. With life expectancy predicted to reach 85.1 years for men and 89.3 years for women by 2050, they are concerned that the pension fund will be exhausted by the mid-2050s.

Promoting the economic activity of women, who accounted for more than half (50.3 percent) of the population last year, is required for keeping the growth engine going as well as enhancing gender equality and social justice, experts say.

“The full utilization of the female workforce is needed for the country to maintain its competitiveness and cope with rising welfare costs,” said Keum Jae-ho, a senior researcher at the Korea Labor Institute.

Encouraging well-educated women like Kim, the housewife, to join the workforce is particularly needed to boost national competitiveness.

Korean women with a high educational background have lagged far behind those in other advanced nations in economic activity. The ratio of economically active Korean women who graduated from college or higher educational institutes remains just above 60 percent, compared to the OECD average exceeding 80 percent.

With the number of well-educated women increasing, their ratio of successful applicants for higher civil service or bar exams also rose from 25.1 percent and 18.9 percent in 2000 to 47.7 percent and 41.5 percent in 2010, respectively.

In the teaching profession, women have caught up with men, accounting for 56.7 percent of elementary and secondary school teachers last year, up from 38.5 percent two decades earlier.

According to the Korean Women’s Development Institute, women accounted for about 38 percent of rank-and-file workers at companies with more than 1,000 employees last year but held just 4.7 percent of executive posts, compared to 39.5 percent in Norway and 15.7 percent in the U.S.

Under a plan to develop the female workforce, the government is pushing to boost the ratio of economically active women to 55 percent by 2015. An affirmative action program was introduced in 2006 to encourage public institutions and private companies to increase female employment and place more women in management positions.

A set of measures have also been taken to support the balance between work and family and help foster family-friendly corporate cultures and social environments.

In a lecture to a group of female college students last year, Chung Jun-yang, chairman of POSCO, one of the world’s leading steelmakers, vowed his company will eventually fill half of its staff with women, saying Korea’s entry into the club of most advanced countries will be possible with the full utilization of the female labor force. With just 3.8 percent of its 17,000-strong workforce being women, the company still has much to do to achieve his goal.

What is more important than introducing institutional measures, experts note, is that Korean society as a whole should change perceptions and practices that have put working women at a disadvantage.

“Our society has a structure that makes it very difficult for working women to establish a balance between work and family,” said Chung Young-ai, professor of social welfare at Korea Cyber University.

“Under traditional patriarchal culture, many married working women are driven into shouldering the double burden of job obligations and housework,” she said. “This situation, in turn, leads to the low evaluation of female employees at workplace, hindering them from rising up the organizational ladder.”

The professor noted Korean companies need to look into cases of some advanced nations where employing and promoting more female staff has led to strengthening corporate efficiency and profitability.

Many labor experts indicate a company with more gender balance in its workforce is likely to better adapt to a changing management environment which increasingly needs the sensitivity of female workers.

The burden on married working women is reflected in the tendency that a considerable number of female workers quit their job due to marriage, pregnancy and child care.

Recent figures from Statistics Korea showed that nearly 20 percent of married women aged 15-64, or 1.9 million, have left the labor force after they married, became pregnant or gave birth.

Many experts note once a woman’s career stops in her 30s when her availability for work usually peaks, it is difficult for her to find the same quality of job later. They say it is unthinkable to secure a competent female workforce without resolving the child care problem.

“In many cases, the day-to-day constraints working women face in raising a family are beyond imagination,” said the professor, who has a six-year-old child.

Figures from the Employment and Labor Ministry showed the employment rates of women in their 20s and 40s increased from 54.9 percent and 62.5 percent in 2000 to 58.0 percent and 64.1 percent in 2009, respectively, while the figure for women in their 30s remained little changed around 50 percent over the cited period. Such figures are in contrast with the patterns of other industrialized countries, where female employment rates are kept well above 60 percent throughout the working age, experts say.

The middle-aged women who wish to return to work often end up in non-regular employment which is mostly low paid, part-time and temporary. More than 62 percent of female workers aged 40-44 were hired on non-regular basis in 2010, higher than the corresponding figure of 43.2 percent for those aged 25-29, according to Statistics Korea.

Yeom said the trend has resulted in a wide wage gap between male and female workers, emphasizing the need for implementing a performance-related pay system, which she said will help keep talented women in the labor market.

The average wage of female employees, which stood at 53.4 percent of that for male workers in 1990, increased to 59.8 percent in 1995, 62.9 percent in 2000 and 66.9 percent in 2010, according to data from Statistics Korea and the Korea Institute for Health and Social Affairs, a state-funded think tank. But the figures were far lower than the levels of other advanced nations, which ranged from 75 percent to 90 percent.

Experts suggest more efforts should be made to make it easier for working women to juggle office obligations with domestic life by establishing family-friendly work cultures and introducing policies that enable more employees to work flexible hours or from home. They also note Korean fathers should assume more responsibility at home and become “true partners” with their spouses.

Keum of the KLI said women on their part should be more determined to engage in economic activity and put themselves forward at the workplace.

“The low fertility rate may be attributed in part to the unstable household economy,” she said. “If both spouses have jobs that can be sustained, they are inclined to have more children.”

In that context, Chung said, it is important for the government to place the policy focus on creating more decent jobs rather than just supporting the balance between work and life.