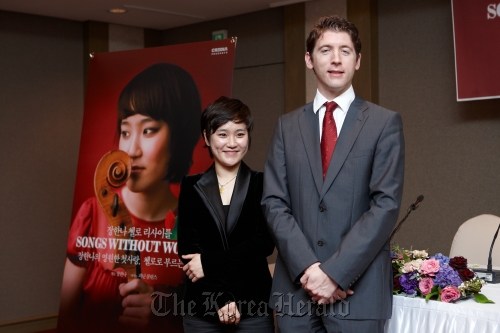 
While the world-renowned musician says she regrets “not having done enough things” as she draws closer to the age of 30, Chang Han-na has had many unequivocal achievements in her decades-long musical career.

While holding at least 40 concerts around the world each year, the cellist has managed to expand her musical scope through five years of conducting.

Chang, 29, promised an “intimate interaction” with the audience during her upcoming recital “Songs without Words,” slated for Dec. 8.

“It feels like a long time since I had my last solo recital (in Korea) because a lot of things have happened in the past two years,” Chang said at a press conference in Seoul, Monday. “I will be meeting the audience with an intimate sound made just with the cello and piano.”

Chang said she programmed the upcoming performance with the goal of more closely connecting with the audience, especially compared to her 2009 Brahms concert.

The title, “Songs without Words,” portrays the world-renowned musician’s thoughts on the principle of music.

“People hum songs even before they learn to talk. I think songs and singing is what professional musicians and the audience have in common,” she said. “That’s where Rachmaninov’s vocalise ― a song without words ― came from.”
Together with pianist Finghin Collins, whom she calls “an important partner,” Chang will be playing Rachmaninov’s Vocalise, Op. 34, No. 14 and Cello Sonata in G Minor, Op. 19. The second part of the recital will be feature De Falla Siete Canciones Populares Espagnolas and Piazzolla’s “Le Grand Tango.”

“After the dramatic and intense first half, we have prepared something lighter and exotic at the same time,” said Chang, recommending the audience will enjoy the concert by “comparing the two different parts.”

Laying hands on her first cello at the age of six, Chang enrolled in the pre-college division of the Juilliard School in 1993, shortly after which she met her mentor Mstislav Rostropovich and began to study privately under the virtuoso.

Although she has performed around the world with great orchestras and earned fame at a young age, Chang was able to keep a somewhat normal lifestyle during her schooling years among friends and activities that weren’t “strictly musical.”

This part of her life, perhaps, was what turned Chang into such an energetic, lively person who finds greatest happiness in interacting with other musicians and people.

Chang, who made her conducting debut in Korea in 2007, described the new role as “a broad experience that brings great pleasure.”

“Through conducting, I have realized how the world of music is so much wider than what I had perceived as a cellist,” said Chang.

As recently as this January, Chang worked with the Bavarian State Youth Orchestra for two weeks and conducted the orchestra at five concerts in Germany, including concerts in Munich and Nuremberg and a recording.

Though she has yet to make “a definite choice” between performing and conducting, Chang admitted there were more things to do as a conductor and that she was feeling growing happiness in the position.

“As a conductor, I feel happy to be interacting with different musicians to make the piece work. This is very different from what I used to feel when I was responsible solely for the part I played.

Dubbing her cello a “passionate romance” partner, Chang said she continues to practice every day as it is important to maintain unity with the instrument regardless of her newly-found passion for conducting.

“It gives me great pleasure to make music together with Finghin, a passionate, hardworking partner who will not hold back his own views and ideas,” she said.

Collins, also attending Monday’s press conference, said he was “really excited” to be playing Rachmaninov for the first time with Chang, “a great artist.”

Picking the late American conductor and composer Leonard Bernstein as her role model, Chang vowed to become “a good bridge” between the composer Rachmaninov and the audience in her recital.