Delegates of UNESCO are meeting in Bali Nov. 22-29, where they will discuss which local traditions should be protected and nurtured for future generations under the list of practices with world cultural importance.

Korea is promoting six of its traditions, which also include the Joseon Dynasty royal cuisine, “Seokjeondaeje,” the semiannual services in honor of Confucius, “najeonjang,” mother-of-pearl craft and “Hansan mosijjagi,” or ramie fabric weaving. 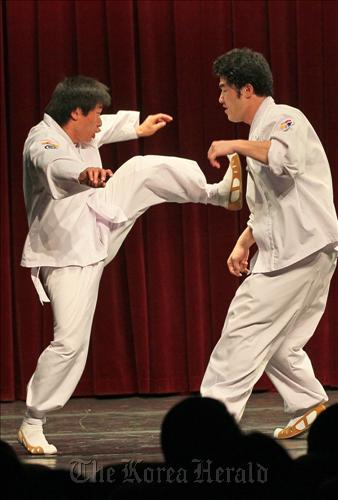 Among the six, Taekkyon and “jultagi,” or tightrope walking performances, have been recommended by the UNESCO preliminary evaluation body to be included in the list, according to the Korean Cultural Heritage Administration.

“The idea is not just to draw up some kind of tourist handbook, but to ensure these activities continue to be performed in the way they have for generations,” Cecille Duvel, head of UNESCO’s intangible heritage unit, was quoted as saying by reporters in Indonesia.

Representatives of 137 countries, including the 24 UNESCO-member states, are attending the Bali meeting.