Should we force firms to hire more women?

The business of gender

South Korea has one of the lowest employment rates for women in the Organization for Economic Cooperation and Development. The country is seventh-last with a female employment rate of 52.2, while the OECD average is 59.6. The gender divide becomes even greater at the top levels of business: just 4.7 percent of executives at large companies are women. In Norway, by comparison, the figure is 39.5.

Part of the reason for the disparity, aside from cultural factors and the availability of childcare, is that companies in the Nordic country are obligated by law to allocate 40 percent of company board positions to women. France passed a similar law in January, while Germany is having a national conversation on the merits of such quotas.

In Korea, moves to increase women’s participation in corporate life have so far been of a voluntary nature. In August, Samsung Electronics chairman Lee Kun-hee committed to increasing the number of women CEOs at the company. In May, the company had announced plans to fill 10 percent of executive positions with women by 2020. But, so far, concern over women’s low ranking on the corporate ladder has yet to manifest itself in a major popular or political push for legislative measures. 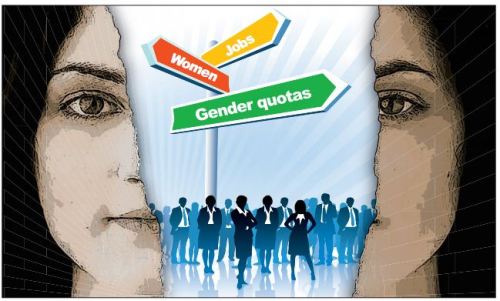 It would be simply anachronistic to debate whether or not the role of women is crucial to the Korean economy of the early 21st century. By now, the legitimacy of gender equality is seldom questioned in most of the world. I even push a step further to argue that women should be given not only equal opportunity in every area of social and economic activity, but also must take an active leadership role in the 21st century.

The mass production economy of the 20th century was dominated by masculine values, such as size, hierarchical order, control, efficiency, competition and monopoly advantage.

In contrast, the creative economy of the 21st century calls for feminine values, such as openness, diversity, sensitivity, emotional intelligence, nurturing, cooperation, horizontal community spirit and innovation advantage. Thus, the fate of organizations and nations in the 21st century depends crucially on whether they successfully nurture enough female leaders. The need for nurturing female leaders is especially urgent for Korea, since the nation is facing a serious HR crisis stemming from rapidly aging population and low birth rate. Besides, Korean women are exceptionally brilliant, energetic and creative. Hence, it is a national imperative to empower Korean women to occupy the center stage, rather than stay back as assistants to men.

Nevertheless, we see extremely few female members at leadership positions of Korean organizations. For instance, the proportion of women occupying top management positions or board membership in Korean organizations is extremely low. As a matter of fact, there is no female CEO of large chaebol companies, except for a few family members of owners. Although some major Korean companies, such as Samsung, recently instituted a gender quota system in entry-level recruitment, the proportion of women is still very low among organizational members above the middle management level. Moreover, most female employees themselves have low career expectations in terms of promotion, since there is no role model for female top managers or board members.

The main cause for this underrepresentation of female members at leadership positions of Korean organizations is the widespread stereotype about the inability of women as leaders. The stereotype that women are sensitive, nurturing and meticulous, but at the same time indecisive, tender, excessively emotional and narrow-sighted is widely held in Korea. Women are therefore often seen as lacking leadership qualities. Although it is a mere perception, this stereotype has a real impact that blocks numerous capable Korean women from rising to leadership positions ― the glass ceiling. Both men and women lack confidence about their qualifications as leaders. However, rigorous academic research has shown that the stereotype is groundless: Men and women show no difference at all in terms of leadership qualities.

It is impossible for Korea to compete in the 21st century’s creative economy, which calls for female leadership, without breaking this vicious circle. The options are to get rid of either the stereotype or the glass ceiling. Since the stereotype is taken for granted and subjective, it is hard to change. Hence, a better option would be to abolish the glass ceiling by enforcing a gender quota for leadership positions ― at least until male dominance in leadership positions is no longer taken for granted. As the number of women in leadership positions increases, men and women in Korean organizations will no longer question the leadership qualities of Korean women. We can learn lessons from successful examples of similar policy interventions, such as affirmative action and equal opportunity law.

In this regard, I would first suggest those selected Korean women run boldly for leadership positions so that they can serve as concrete examples that shake the psychological foundations of gender stereotypes and the glass ceiling. In this regard, Hillary Clinton’s unsuccessful bid for the White House may give inspiration for Korean women. In her concession speech in 2008, Clinton said, “Although I have not succeeded, there are now 18 million cracks in the glass ceiling preventing a woman from winning the White House. Children today will grow up taking for granted that an African-American or a woman can, yes, become the president of the United States.” Then I suggest policy makers to institute a temporary gender quota for leadership positions, such as top management or board members, in Korean organizations until the proportion of women reaches a certain level at which female leaders are no longer regarded as exceptions.
By Shin Dong-youb

Shin Dong-youb is a management professor at Yonsei School of Business. ― Ed.

No: There are better ways to boost diversity

The typical director of a listed Korean company is a man in his early 50s. The boardroom remains one of the last exclusive bastions for men, despite enormous strides in gender equality that have been achieved in all major sectors of society. Korea’s corporations need to increase the number of women, in addition to minorities and non-Koreans, to diversify their boards.

Diversity, particularly, in the Korean context can provide a wider range of opinion, experience and networking but also can help prevent group think that can hinder innovation and lead to inertia. Diverse boards can better understand the needs of diverse customers and workers, which is critically important given the globalized nature of business. Studies indicate that diverse boards also can act more independently. Diversity at the board-level also provides role models at the top of the corporate ladder that encourage aspiring younger employees with non-traditional qualifications or backgrounds. Diversity of course must be matched with competence, integrity and diligence.

In Asia, the number of women on boards remains among the lowest in the world. In Japan, female directors make up only 1 percent of board members, in Korea, 4.6 percent, and Singapore, 5.7 percent. The rare exception is the Philippines, with an impressive 23 percent. Even in Europe the gender imbalance pervades with the average being only 9.7 percent among the top 300 European corporations. In the United Kingdom, women compose only 14 percent of the boards of FTSE 100 companies, in France 15 percent, of CAC40 companies, and Portugal and Italy have the lowest percentages, with women occupying 0.4 percent and 3.6 percent, respectively of their listed firms’ boards. The U.S. proves no better at 11.4 percent. Despite significant progress in many countries, the pace remains slow. In the U.K., for instance, at the current rate of change they will need more than 70 years to achieve gender balance.

The question remains as to how best to achieve appropriate board diversity, particularly gender balance. The most forward looking countries, Norway, Spain, Iceland and France ― all in Europe ― have adopted mandatory regulations requiring that boards consist of at least 40 percent women. Companies that failed to do so have been threatened with delisting and sanctions. Norway has been the most successful, achieving the 40 percent threshold in only seven years in 2009. Spain has given its companies eight years until 2015 to achieve the same quota.

Instead of an immediate, hard law-based, mandatory quota, however, more informal prodding should be utilized to help companies achieve gender balance in more a gradual and accommodating fashion. Abrupt adoption of compulsory quotas can create a counterproductive atmosphere of intrusive government intervention and can foster a sense of tokenism for the women so chosen. With the rapid entry of women in the workforce, it is only a matter of time before there is a wealth of female talent in their 50s. Even Norway took seven years.

Korean policy makers should hence adopt a cooperative approach to work together with companies to persuade them to pledge to establish quantifiable thresholds toward achieving gender balance. The European Union, for example, has set such goals for at least 30 percent female board members by 2015 and 40 percent by 2020. The government should start with state-owned and controlled enterprises and enhance the peer pressure upon private companies.

Korean companies should be required to give due regard to gender when appointing directors. The non-mandatory U.K. Corporate Governance Code, for instance, provides that “the search for board candidates should be conducted, and appointments made, on merit, against objective criteria and with due regard for the benefits of diversity on the board, including gender.”

Companies should therefore disclose whether they have a diversity policy, the efforts made to increase female representation, and the progress to ensure better gender balance. Furthermore, companies should identify the barriers for women becoming directors in their firm.

Korea should also consider adopting a “comply or explain” approach that requires companies to either meet disclosure standards or thresholds or instead explain why they have not been able to implement them.

We can also learn from the Spanish example. Despite the mandatory nature of the quota, companies do not face formal sanctions. Instead companies that achieve the 40 percent quota will receive positive incentives in the form of priority status in the allocation of government contracts.

In the end, companies that have the vision to achieve diversity and take advantage of the under-utilized talent pool of women will be more successful in the future. Through appropriate guidance, disclosure standards and public campaigns, companies can be naturally persuaded and will have sufficient time to transform themselves.
By Kim Joon-gi