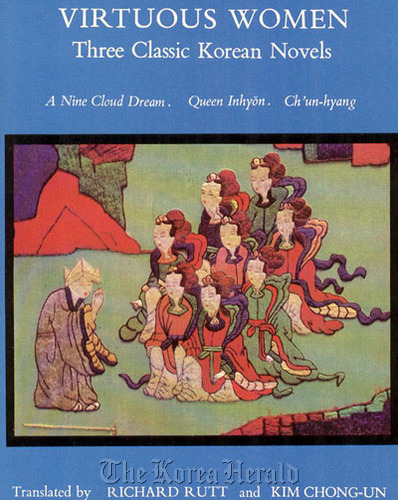 Meet some of the most famous female characters of Korea’s traditional folktales.

Translated by Richard Rutt and Kim Chong-un in the 70s, “Virtuous Women: Three Classic Korean Novels” presents three of the most popular Korean folktales of all time, featuring the lives of real and fictional women. The included tales are: “Chunhyangjeon,” “Queen Inhyeon,” and “A Nine Cloud Dream.”

Among the three, “Chunhyangjeon” is arguably the most celebrated tale of all. A love story between two young people who belonged to different social classes in the Joseon period, “Chunhyangjeon,” which is believed to have been composed in the 17th or 18th century, has been made into movies and TV series countless times in the past century.

The Chunhyangga, one of the five surviving stories of Korean pansori songs ― Korean traditional singing with percussion ― is also widely known and still very often performed by pansori artists.

The story tells a story of Chunhyang, a young, beautiful and talented woman whose mother is a “gisaeng,” a low class female entertainer living in Namwon, North Jeolla Province. She falls in love with Mong-ryong, a son of an aristocrat living in the same town. After promising a life together, however, Mong-ryong leaves for the nation’s capital to do the state examination to become a ranking official.

Before leaving Namwon, Mong-ryong tells Chunhyang he’ll come back to get her as soon as he is recruited by the government, and asks her to wait for him. She promises him she will ― not knowing what kind of hardship awaits in order for her to keep her word.

The Chunhyang character is known for her loyalty and bravery, as she chooses to endure ordeals and resists against authority to keep her promise with Mong-ryong ― in spite of her low social caste. Many cultural events celebrating the character are still being held in present-day Namwon, including the annual Chunhyang Festival and Miss Chunhyang pageant competition.

“Queen Inhyeon,” on the other hand, is based on the real-life story of Queen Inhyeon (1667-1701), who was the second Queen consort of King Sukjong of Joseon. She is well-known for being dethroned in 1688 because of court disputes caused by the famous royal concubine Jang Hui-bin.

The ambitious Jang, who used to be a court maiden, became the third Queen consort while Inhyeon and her supporters were forced into exile for six years. The tale manages to entertain its readers with the famous political saga during that time period, along with the lives of Inhyeon and Jang Hui-bin ― both of which end as tragedies. The writer of the novel is unknown, though it has been widely reported that one of the court maids of Inhyeon had composed it after her death.

“A Nine Cloud Dream,” a novel written by Joseon novelist Kim Man-jung (1637-1692), is also an entertaining read, filled with both Confucius and spiritual values and lessons.

All of the three tales are a good introduction to both Korea’s history and root of its present-day culture, as well as lives of women in the Joseon period.