Buddhist nun teaches how to live better on temple food


About 40 middle-aged women and a few men were all eyes and ears as Buddhist nun Seonjae related to them how she refused to cook at Hotel Shilla when treated like a regular cook.

“Temple food is not some random cheap food. I told them I don’t use factory-made soy sauce, and that I would do it if they provide me with soy sauce made at home. It is only since then that Hotel Shilla Jeju started making sauces themselves. And that is how I made temple food a high-class cuisine,” Seonjae told her students who nodded and applauded in agreement.

Her temple food cooking class started at 10 a.m. on a Friday at Korean Bhiksuni Association building in Suseo-dong, southern Seoul. On top of seven kitchen counters were vegetables and sauces made at the association building by the students. They busily took notes and often burst into laughter at Seonjae’s jokes.

Seonjae cooked up three dishes ― Pumpkin Perilla Noodles, Sesame Leaf Boiled in Sauce and Pickled Cucumber ― in the front of the class and let everyone taste before practicing them themselves. Some whispered to each other anxiously that they might not get to try her food because there were too many people.

“Her dishes are very simple and artless. Some say that it was below their expectations for that reason, but that is what makes the food truly healthy for us,” said Choi Eun-jin who waited a year to join the class.

“I heard that there are about 3,000 in line to attend the class right now. The cooking lesson is important too, but what I really like about the classes is her lectures in the beginning of the class. I spend a week mindlessly eating food with all kinds of additives, and renew my attitude every time I come to class,” she said.
Temple food missionary

“I am not a regular cook,” Seonjae told The Korea Herald after the class.

“We eat vegetarian and natural food to live a healthy life. Temple food is that plus something spiritual ― something we monks call ‘do’ and you call wisdom. If you like organic food, someone will start organic farming; and if you like hamburgers, someone will start a hamburger store. One mouth has a big impact on the society. I practice and teach Buddha’s respect for living things through food.”

The biggest characteristic of temple food is that it does not use meat, fish, shellfish, any kind of additives or even garlic or scallions.

Seonjae, however, said that one does not have to understand the philosophy in order to enjoy temple food. Even foreigners are becoming increasingly interested in it these days, she said.

Ever since she showcased temple food at the Korean Embassy in Germany in 2008, German students have come every year to learn.

“Foreigners reject Korean traditional food at first because they are unfamiliar with the spices ― lots of scallions, garlic and salted and fermented seafood. But temple food is all about deducting those spices, so it fits their taste buds just fine,” she said.

Seonjae was born in Suwon, Gyeonggi Province in 1956 and became a Bhiksuni 32 years ago. She taught temple food at Dongguk University for ten years and wrote many cooking books including one published in May. In the backyard of her home in Yangpyeong, Gyeonggi Province, she has 380 jars, most of them full of fermenting sauces.

What made the once Episcopalian teenager, whose dream was to proselytize her family, turn to Buddhism was her love for her parents. A trip to a temple at the age of 18 opened her eyes.

“Listening to a monk’s lecture, I realized what a bad daughter I had been. So I asked the monk how I could mend it, and he gave me three possible suggestions ― the easiest way, give them nice food and clothes; an average way, make them feel at ease; and the best way, free them from their obsessions by teaching them Buddhism. That’s when I thought that I should become a Buddhist nun,” said Seonjae.

Her parents, of course, were furious. Her father told her that her marrying a decent man would be the best thing she could do for him. So she waited for a few years, working as a revenue officer, for them to understand. She finally left home at the age of 24 and devoted herself to temple food.

What do you eat?

Her talent in fact runs in the family ― her grandmother used to work in the Joseon royal kitchen and her mother was also a great cook. As a kid, Seonjae would spend time in her father’s herbal medicine shop and learn about medicinal food.

She came across a book on Buddhism one day and was impressed to learn that when people came to Buddha for consultation, the first thing he asked was “What do you eat?”

“A reporter came to interview me a few days ago, and his face was all yellow and puffed up. So I asked him ‘what do you eat’ and he immediately answered ‘ramen,’” said Seonjae, shaking her head.

“I told him that ‘before you interview me, you should change your mindset first.’ Instead of cooking ramen, just spend 30 minutes of your day to cook rice and eat kimchi. Your job is important, of course, but is it more important than your life?” asked Seonjae.

Though it is not unusual for a monk to be fond of temple food, Seonjae decided to promote it because she knew it could help. This is she first realized when several juvenile delinquents were sent to the temple. The junk food addicts started to calm down as she fed them temple food. After she suffered from liver cirrhosis but gradually cured herself, her belief got stronger.

“I realized that I should teach kids from when they are young, so that there won’t be more patients like me. Many kids got better. But I did not cure them, I just cooked for them,” said Seonjae.

To young people of today who claim to be under extreme stress everyday, Seonjae advised to simply avoid bad food, rather than searching for health foods. It is a pity that Koreans nowadays do not seem to understand hansik, Korean traditional food, at all, she added.

“Hotel chefs do not understand why watery kimchi should be served with porridge. Only one out of 70 university professors raise their hands when asked if they know how to make traditional sauces. The base of hansik is the sauces, kimchi and fermented food. Koreans need to eat those with rice in order to digest well, but many no longer do,” said Seonjae.

“That is why one out of three Koreans becomes a cancer patient although we have so many cooks and doctors. That is why people are turning to temple food,” she said. 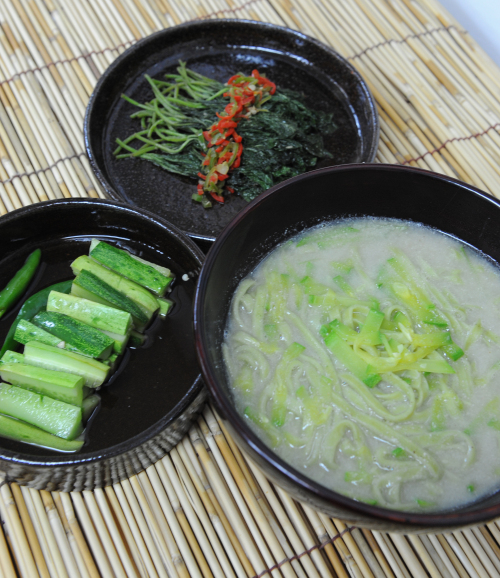 1. Grind green pumpkin and sesame leaf with flour and add a bit of salt to make into dough.

2. Roll the dough thinly and chop into noodles.

3. When the kelp soup boils, scoop out the kelp, plunge in the noodles, and let it boil.

4. When it boils, add perilla powder and salt.

3. Pile up the sesame leaves and pour the sauce on top.

2. Mix soy sauce, water, vinegar and sugar and pour the sauce on the cucumber.