In 1979, two girls and three boys on the brink of adolescence spent an idyllic summer exploring heavily wooded Leakin Park on the outskirts of Baltimore. But one day, something happened there that none of them wanted to talk about. 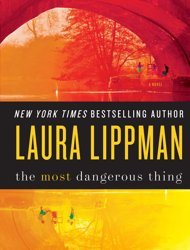 But now one of those old friends, Gordon “Go-Go” Halloran, gets rip-roaring drunk and smashes his car into a highway barrier. The funeral draws the surviving friends ― a magazine editor named Gwen, a stewardess named Mickey and Go-Go’s brothers, Tim and Sean ― back into the same orbit.

Police figure Gordon’s death is either an accident or a suicide. Gwen, the story’s protagonist, isn’t so sure. As she pokes into the case, she and the surviving friends are pulled back into the past ― to what happened long ago in those dark woods.

Each of them, it turns out, has a different memory of it. But it’s not just because childhood memories warp over time. It’s because each of the old friends, and their parents as well, never knew more than a small part of the story. And what each of them knew was a different part.

“The Most Dangerous Thing” is Laura Lippman’s seventh stand-alone novel, although fans of her popular private eye series will be pleased to know that its hero, Tess Monaghan, makes a cameo appearance. The stand-alones, including “I’d Know You Anywhere” (2010) and “What the Dead Know” (2007), have been widely praised not only as mysteries but also as literature ― a body of work that places her in the company of Thomas H. Cook and Dennis Lehane as one of our finest literary crime novelists.

“The Most Dangerous Thing” doesn’t quite measure up to the earlier stand-alones. The first third drags a bit, and story doesn’t pack quite as much emotional punch. But it is nevertheless a fine and ambitious novel that explores how much parents don’t know about the lives of their children, and how little children know about their parents.

Lippman flashes effortlessly between the past and the present, describing that long-ago summer and chronicling Gwen’s present-day search for the truth. Gwen, burdened with the care of her aged father and looking for a way out of her dying marriage, doggedly searches for answers, gradually unwinding the past layer by layer.

What she discovers will shock both her and the readers, and will change the lives of all of the characters forever.