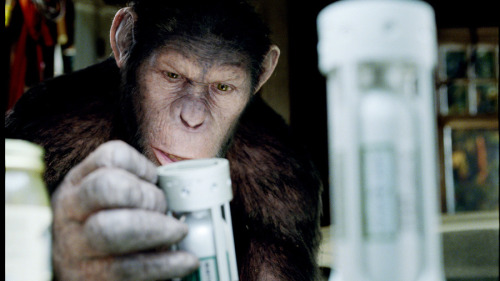 Rise of the Planet of the

Action. Directed by Rupert Wyatt. Will Rodman (James Franco), a San Francisco-based scientist whose father (John Lithgow) suffers from Alzheimer’s, develops a cure for the disease and tests it on apes. Rodman takes one of the tested baby chimpanzees, Caesar (Andy Serkis), to his house and starts to live with him. As the time passes by, Caesar’s intelligence level surpasses that of most humans. One day, however, Caesar unintentionally ends up attacking humans while trying to protect Rodman’s ill father, Charles. Authorities order Rodman to place Caesar into a remote cage, where other chimpanzees are housed while being locked up. In the cage, Caesar witnesses how his fellow chimps are being cruelly abused by humans. Deeply disillusioned and enraged, Caesar makes his plan to escape the cage to get Rodman’s Alzheimer’s cure and increase his friends’ intelligence.