The Bank of Korea said Tuesday it bought 25 tons of gold in the June-July period ― its first purchase since the 1997-98 financial crisis.

The purchase touched off speculations about its motives at a time when gold prices are hitting record highs.

The central bank said the purchase over the past two months had raised its gold holdings to 39.4 tons, valued at $1.32 billion as of end-July, a dramatic increase from $0.08 billion the previous month.

“The purchase of gold is also expected to reduce investment risks in managing foreign reserves due to the diversification effect.” 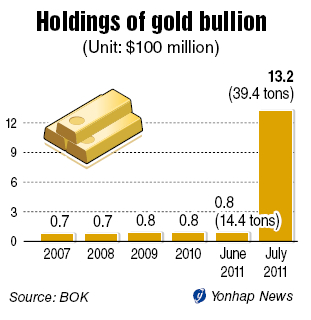 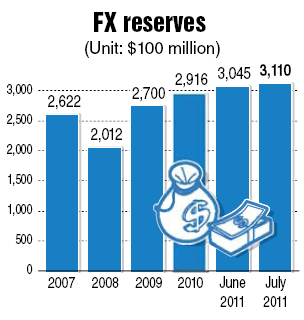 Along with the data about the gold bullion purchase, the BOK also released figures for foreign reserves, which shot up to a fresh high in July on the back of a stronger British pound and Japanese yen that boosted the dollar conversion value. The country’s foreign reserves rose to $311.03 billion at the end of last month, up $6.55 billion from June.

Although the total proportion of gold held by the central bank, even after the latest purchase, remains at 0.4 percent of the country’s total foreign reserves, market watchers expressed keen interest toward the BOK’s first-ever large purchase of gold in the process of running its investment portfolio.

Raising the question of whether the timing is right, the bank’s move came as the gold price hit a record high of $1,632 per ounce last week, up a whopping 48 percent this year, driven by the investors’ appetite for alternative safe-haven assets against the backdrop of sovereign debt crises gripping Europe and the U.S.

A sudden drop in gold prices could hurt the BOK, a scenario that seems to have kept the bank’s fund managing staff from making decisive action until two months ago.

“It is true that gold prices are at a record high level, but as the latest purchase of gold has been planned as a long-term holding, the bank’s capacity to purchase gold played a bigger role than consideration of short-term price swings,” said Suh, in charge of managing the BOK’s funds.

Before 2004, Korea’s foreign reserves stood at around $100 billion, leaving no room for diversifying into gold and other alternative assets. The central bank could not afford to buy gold as it had incurred a loss between 2005 and 2007. In the period from 2008 through 2010, the global financial turmoil forced the BOK to put priority on securing sufficient reserves.

Asked about the outlook for the price patterns of gold, Suh declined to put a forward view; saying views were divided. Bullish opinions led by Deutsche Bank and Goldman Sacks predicted a rise in gold prices while JPMorgan and Citibank predicted gold prices would go down.

“In the long term, the bullish view is more widely shared in the market, and the BOK holds a stance that gold holds an investment value in terms of diversification,” Suh said.

The BOK is now expected to increase its gold holding in the near future largely because it ranks still 45th in the World Gold Council’s list of central banks’ gold holdings, and other Asian countries with large foreign reserves have amassed far more gold.

Korea was the world’s seventh-largest holder of foreign exchange reserves after China, Japan, Russia, Taiwan, Brazil and India as of the end of June.