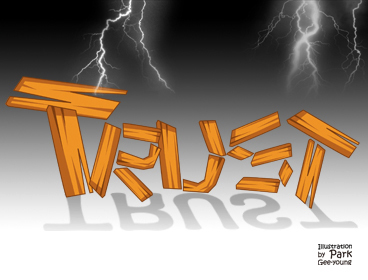 Koreans’ lack of faith in strangers, foreigners holds country back


A 25-year-old man surnamed Choi beat and raped his girlfriend in Cheongju, North Chungcheong Province, in July last year after she demanded they break up. When he faced police investigation, Choi’s mother, 50, hurt his son with a stone to make it look as though his girlfriend had hit him and provoked the attack. She then made him sue his girlfriend.

Both Choi and his mother surnamed Chun were recently convicted of making false accusations, with Choi also found guilty of raping and injuring his girlfriend. The court said Chun’s act was more malicious than her son’s.

Also in Cheongju, a 77-year-old man has been imprisoned four times for making 118 claims based on fabricated statements since 2000.

In April 2010, a woman in her 50s in Busan was sentenced to a year and four months in jail and a fine of 3 million won ($2,850) for a dozen false accusations including some against a prosecutor and a judge. 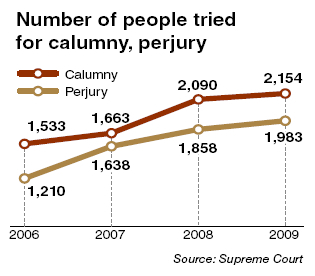 Experts note that Korea may be the country with the highest rate of people punished for making false accusations or giving false testimonies. In 2007, Koreans indicted for perjury or calumny totaled 1,544 and 2,171, respectively, compared to only nine and 10 in Japan. Taking into account Japan’s population is about 2.5 times Korea’s, experts said the figures indicate that Koreans commit perjury and make false accusations about 420 times and 540 times the rate of the Japanese.

“Some witnesses appear to believe they have the right to lie while making statements to investigators,” said a prosecutor at a prosecution office in Seoul.

Under the current laws, witnesses giving false testimonies to the prosecution or police go unpunished, while those proved to have fabricated facts in filing suits or to have committed perjury in court are subject to up to 10 years in prison or 15 million won in fines and up to five years in jail or 10 million won in fines, respectively. The Cabinet recently approved a revision bill to criminal laws, which would introduce obstruction of justice to enable the punishment of lying witnesses and increase the maximum prison term for perjury to seven years.

In his 1995 work “Trust: The Social Virtues and the Creation of Prosperity,” U.S. scholar Francis Fukuyama placed Korea in the group of low-trust societies along with China, France and Italy, which are family-oriented and have relatively low levels of trust among strangers. He argues low-trust societies need to negotiate and often litigate rule and regulations while high-trust societies like those in Germany and Japan are able to develop innovative organizations and hold down the cost of doing business. According to him, the level of trust based upon shared norms is the most pervasive cultural characteristic influencing a nation’s prosperity and global competitiveness.

In a further reflection of the relevance of his theory, Korea has been inundated with fraud, accusations and complaints, with Koreans’ trust in strangers and foreigners remaining at lower levels, compared to other advanced countries.

According to statistics from the Justice Ministry, a total of 205,140 cases of fraud took place in 2008, costing victims about 2.8 trillion won.

Misappropriations and breaches of duty numbered 26,750 and 5,135, bringing about losses of 806 billion won and 617 billion won, respectively, in the same year.

The number of cases submitted to the prosecution increased from 564,532 in 2007 to 594,058 in 2008 and 618,470 in 2009, according to the Supreme Prosecutors’ Office. More than 60 percent of them have not led to indictments by prosecutors, suggesting Koreans tend to rush to accuse someone without trying to find a compromise. 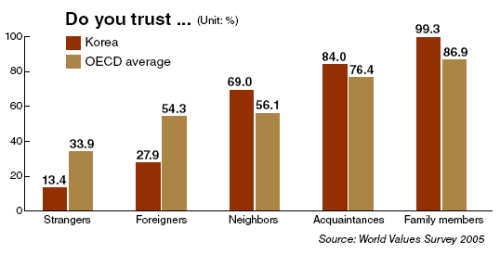 The high sense of closeness to family members, friends and other acquaintances is often behind perjury cases. A survey by the prosecution found that more than half of those indicted on perjury charges had acted because of acquaintance and 26.5 percent were motivated by economic benefit.

A prosecutor, requesting anonymity, said he has often got the impression of trials being degraded into a contest of liars. Last year, a motel owner, who had been fined for arranging prostitution, was arrested for inciting his friends to give false testimonies in favor of him. His friends also stood trial on perjury charges. A man being tried for violent acts and his wife were recently punished for committing perjury. After the wife was indicted for making a false statement that her husband had not been violent, her husband had perjury added to his counts by insisting that his wife had not lied about his case.

Experts note the lack of a sense of justice among Koreans may be due to their tendency to put personal relations ahead of laws, which is rooted in traditional culture and has been augmented by the turbulent modern history of the nation. They say such attachment to personal ties has hampered the strict application of law and public norms in Korean society. In the Joseon Dynasty (1392-1910), which was based on Confucian principles, those who accused their parents, superiors and spouses were punished for tainting “fine customs.”

“Koreans tend to lie to maintain personal relationships, which shows the characteristics of Korean society oriented to connections and harmony,” said Mun Yong-rin, professor of education at Seoul National University, in a paper.

A report by the Korea Development Institute indicated Koreans’ tendency of trusting acquaintances and distrusting strangers has become stronger through Japan’s colonial rule, the Korean War and the rapid economic growth that has driven them to unlimited competition.

Mun said Koreans have developed their own survival wisdom based on their historical experience that personal ties and private organizations have been more helpful and protective for them than public authorities.

The low-level trust in Korean society has also been reflected in Koreans’ inclination to easily accept groundless rumors as true and doubt statements or explanations by government officials and experts. For an example, the Seoul government had difficulty getting the public to believe the outcome of the inquiry into the cause of a naval ship sinking in the West Sea in March last year. Even after inviting international experts to join the investigative team, some Koreans persistently raised suspicions over the conclusion that a North Korean torpedo attack sank the vessel.

In a survey of 2,012 adults, conducted by the Presidential Committee on Social Cohesion in 2010, a meager 3 percent of respondents said they trusted the legislature, with just 19.6 percent and 16.8 percent having confidence in the administration and the judiciary. A 2006 survey by the KDI put public trust in the legislature, administration and judiciary at 3.0, 3.3 and 4.3, respectively, on a scale of zero to 10 with 10 marking complete confidence. The scores were below or similar to 4.0 for strangers. Other organizations also marked tepid scores ― 5.4 for educational institutions and civic groups, 4.9 for the media and the military, and 4.7 for large companies.

A 2007 survey by the Pew Research Center, a nonprofit U.S. think tank, found that fewer than one in 10 Koreans were satisfied with their government, below 11 percent for Nigeria and 22 percent for Uganda and similar to 6 percent for Lebanon and 5 percent for Palestinians. Questioned on whether they believed national leaders had a good influence on state affairs, just 24 percent of Koreans replied positively ― the third from the bottom in the list of 32 surveyed countries and about half the levels in the U.S. and Japan.

With societal trust remaining low, Korea is gripped by intensifying social conflict. In a social conflict index list of 27 OECD member countries, published in a 2010 research by the Samsung Economic Research Institute, Korea ranked fourth ― behind Turkey, Poland and Slovakia.

Critics blame the high level of distrust and conflict in Korean society for moral hazards and a lack of social responsibility among those with power and wealth. It has become a familiar scene for those designated for high-ranking posts to withdraw from their positions after coming under fire for a string of past irregularities or illegal acts revealed at parliamentary hearings. But many experts say the problem of low trust should not be attributed only to those in the higher echelons, noting that fraud, false accusations, perjury and other crimes gnawing at social trust have permeated all corners of society.

If Korea is to join the group of advanced nations, they say, the country should strengthen efforts to enhance the level of societal trust. They indicate Koreans should discard their distrust for strangers and foreigners and open wider their minds in an era when the number of expatriates living in their country has exceeded the 1 million mark and is expected to continue growing.

“Until now, economic growth has enabled Korea to come to the threshold of entering the group of advanced countries,” said Shin Kwang-yeong, sociology professor at Chung-Ang University.

“But from now on, Koreans should take steps toward building a trustful society to become a truly advanced nation.”

Na Eun-young, professor of mass communications at Sogang University, said Koreans have been passionate in their achievements and such passion has led to the permeation of the perception that in the process, other things including moral integrity can be sacrificed to some degree. She noted, however, times have changed and Koreans should recognize the increasing importance of paying heed to morality and the interests of the whole community rather than being preoccupied with their goals.