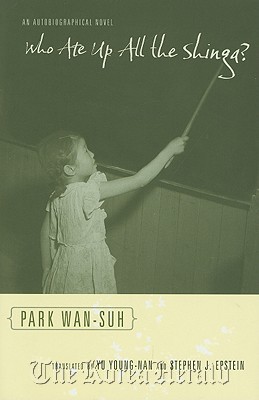 Who Ate Up All the Shinga? An Autobiographical Novel

Among the many novels by the late author Park Wan-suh, who wrote a great deal on the brutality of the Korean War, Korea’s ordinary families and women’s issues, her 1992 novel “Who Ate Up All the Shinga?” explores Park’s own family, whose fate was deeply affected my Korea’s modern history.

Park had said she wrote the book solely based on her own memory, of her own childhood experience of the Korean War. The book starts off with Park’s peaceful early years in Gapyeong-gun, Gyeonggi Province, where the author was born and grew up along with its beautiful nature. Park writes about her rural childhood experiences, such as eating Shinga, an edible flowering plant, playing at a brook side and hitting a public backhouse with a group of giggling friends.

Park moves to Seoul when she is about 7 ― as her shallow and driven mother insists she and her brother must be educated in the nation’s capital ― and finds herself not liking the city too much. She misses the nature of her hometown and playing with her old buddies. From Park’s early school experience ― where she sang and studied in Japanese language ― to an account of her uncle who considered changing the family name into a Japanese one, the novel shows what it was like to live through the colonial rule as ordinary Koreans.

Shortly after her older brother gets married, Korea is liberated from Japanese colonial rule. Park is admitted to Seoul National University in 1950, but the school closes down as the Korean War erupts in the same year. The war almost completely destroys Park’s family and changes every member’s life forever.

The novel, through the story of Park’s own family and herself, records Korea’s history from its colonial rule to the post Korea War years. It shows how a family and an individual were affected and changed because of the historical events, and most importantly, how it formed Park’s desire to write. The late author repeatedly had said she wouldn’t have started a literary career if she hadn’t experienced the war.

Though it feels rather like a memoir, the novel is an entertaining and sometimes heart-wrenching read as Park’s brilliant use of language, as well as genuine depiction of its characters shine from the beginning to the end.

Park became a housewife-turned-novelist at age 40 when her first novel “Namok,” meaning “Bare Tree” won a contest organized by a women’s magazine in 1970. Throughout her literary career she devoted herself to writing about the aftermath about the Korean War, as well as middle class families in the 1960s and ‘70s Korea. The renowned author died of gallbladder cancer in January. She was 80.