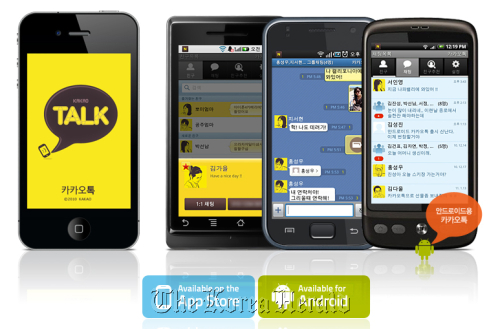 Competition is heating up between mobile messenger operators in Korea as Kakao Talk, the formidable smartphone application, appears to be developing its internet phone call services.

Industry watchers said Sunday the venture firm has been recruiting engineers who have experience in mobile voiceover Internet protocol, technology that enables voice and multimedia communications between users via broadband Internet connections.

Kakao Talk denied the speculation, saying the recruitment notice was put up in its efforts to “prepare for the future given the unpredictable market condition.”

“Currently we have no plan to adopt the service because calls get cut off often on mobile messengers and other problems,” a company official said.

But the developer’s apparent move is viewed as a fait accompli by many observers, as the industry’s trend is shifting to voice services from text messaging.

If adopted, the new feature would provide a big boost to the app’s already explosive popularity, industry officials said, as it makes easier for existing users to call their friends and families by tapping a button on the screen, without paying additional fees other than for data use.

Launched last March, the app ― available both on Apple’s iPhones and Google’s Android-powered smartphones ― has garnered 19 million subscribers worldwide so far, with some 500 million messages being exchanged every day.

The race for the mobile messenger is already furious. Challengers include telecom operators such as KT and LG Uplus, web portal operators including Daum Communications and SK Communications, and even Apple.

Among rivals, Daum’s “MyPeople,” the runner-up, saw the number of users surge by 2 million on monthly average since it added a voice feature in February. The figure now stands at 11 million.

SK also unveiled its voice-enabled “NateOn talk” early this month, aiming for 10 million users by the end of the year.

But some remain skeptic over the impact of Kakao Talk’s potential update, saying the technology is not new and has yet to match its quality to traditional phone calls.