Anders Behring Breivik, 32, was arrested for allegedly shooting at least 85 people dead at a youth Labour Party meeting on an island and killing seven more in a car bomb explosion which ripped through government buildings in Oslo.

“He admitted responsibility,” Behring Breivik’s lawyer Geir Lippestad told Norway’s NRK television channel. While there was no official confirmation of the man’s identity, he was widely named as Anders Behring Breivik by local media.

“He explained that it was cruel but that he had to go through with these acts,” Lippestad said, adding that the attacks were “apparently planned over a long period of time.”

A rambling 1,500-page tract apparently written by Behring Breivik said he has been preparing the “martyrdom operation” since at least autumn 2009.

The Internet document ― part diary, part bomb-making manual and part political rant in which he details his Islamophobia ― explains how he set up front mining and farming businesses to prepare the attacks for which he was arrested on Friday.

“The reasoning for this decision is to create a credible cover in case I am arrested in regards to the purchase and smuggling of explosives or components to explosives ― fertilizer,” the tract says. 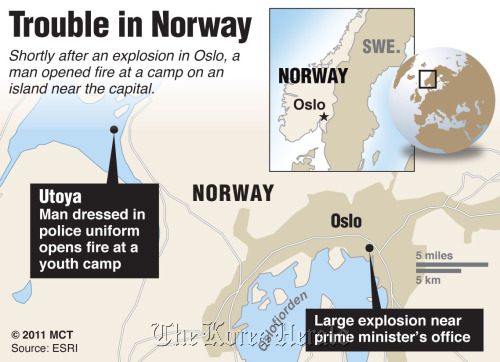 As harrowing testimony emerged from the summer camp where scores of youngsters were mown down, Norway was struggling to understand how a country famed as a beacon of peace could experience such bloodshed on its soil.

“Never since the World War II has our country been hit by a crime on this scale,” Prime Minister Jens Stoltenberg told journalists as police searched for more bodies on the idyllic Utoeya Island near Oslo.

“Many of those who have died were friends. I know their parents and it happened at a place where I spent a long time as a young person ... It was a paradise of my youth that has now been turned into hell.”

The toll could rise further as the search continued for four or five people still missing from the island, aided by a mini-submarine and Red Cross scuba divers.

National police commissioner Sveinung Sponheim said investigators were still trying to establish whether a second shooter was present on the island, as suggested by certain witness accounts.

Blond-haired Behring Breivik described himself on his Facebook page as “conservative,” “Christian,” and interested in hunting and computer games like World of Warcraft and Modern Warfare 2, reports said.

He also described himself as director of Breivik Geofarm, an organic farm that may have given him access to chemicals used in the production of explosives.

A sole message on his Twitter account, dated July 17, was based on a quote from British philosopher John Stuart Mill, reading: “One person with a belief is equal to a force of 100,000 who have only interests.”

Police spokesman Roger Andersen described the suspect as a “Christian fundamentalist,” adding that his political opinions leaned “to the right.”

The head of the populist right-wing Progress Party confirmed Behring Breivik had been a party member between 1999 and 2006 and for several years a leader in its youth movement.

He stopped paying his subscription before ending his membership, according to the party.

“Those who knew the suspect when he was a member of the party say that he seemed like a modest person that seldom engaged himself in the political discussions,” Siv Jensen said in a statement on the FrP website.

The attacks on Friday afternoon were western Europe’s deadliest since the 2004 Madrid bombings, carried out by al-Qaida.

While there had been initial fears they might have been an act of revenge over Norway’s participation in the campaigns in Afghanistan and Libya, the focus shifted when it emerged the suspect was a native Norwegian.

The first attack was a car bomb which seared through landmark buildings including Stoltenberg’s office and the finance ministry. It is thought that the car-bomber then caught a ferry to nearby Utoeya Island wearing a police sweater.

On arrival, he claimed to be investigating the bomb attack and began opening fire with an automatic weapon. The shooting spree lasted for an hour and a half.

Witnesses described scenes of horror among the more than 500 people attending the youth camp. Some who tried to swim to safety were even shot in the water.

Khamshajiny Gunaratnam, 23, said that people initially thought it was some kind of joke before she and her friends realized their lives were in danger.

“We ran and ran. The worst thing was when we found out the shooter was dressed as a policeman. Who could we trust then? If we called the police, would he be the guy (who) would come to our ‘rescue’?,” she wrote on her blog.

She and her friend Matti swam toward the mainland as the gunman fired into the water. After a while, a boat picked them up and brought them to safety.

“I have heard stories about people swimming over the lake, people hiding under stones and almost being shot at, so there are some terrible stories. We have agreed in our groups that we won’t talk about the most terrible because it goes only to the media,” said visibly shocked 17-year-old survivor Miriam Einangs.

Stine Haheim, a Labour party lawmaker who was on the island, said the gunman had carried out his killings methodically.

“He was very calm. He was not running, he was moving slowly and shooting at every person he saw,” she said.

Stoltenberg, as he visited some of the survivors, spoke of his own anguish at the massacre on an island to which he was a frequent visitor. He had been due to give a speech on Saturday to the camp, organized by his Labour party.

Norwegian police said they feared there could also be explosives on the island. According to a spokeswoman for a farming cooperative, the suspect bought six tons of fertilizer ― which can be used to make bombs ― in May.

There was widespread international condemnation, with U.S. President Barack Obama saying the attacks were “a reminder that the entire international community has a stake in preventing this kind of terror from occurring.”

Pope Benedict XVI was “profoundly saddened” by news of the attacks, the Vatican’s Secretary of State Cardinal Tarcisio Bertone said in an open letter to Norway’s King Harald V.

The Norwegian capital is a well-known symbol of international peace efforts and home to the Nobel Peace Prize.